What can the most successful doll on the planet show us about being Jewish today? What do Barbie dolls and the history of the Jewish people have in common? Quite a lot, according to filmmaker Tiffany Shlain (daughter of physicist Leonard Shlain), whose The Tribe uses the doll's Jewish inventor Ruth Handler as a jumping-off point for an 18-minute riff on the heretofore unseen connections between Jewish culture and Ken's plastic girlfriend. Narrated by Peter Coyote, the film mixes archival footage, graphics, animation, Barbie dioramas, and slam poetry to tell two seemingly disparate histories that nevertheless converge in unexpected ways. Hey, if it was good enough for Tricia's wedding….

In the last year since Tiffany Shlain's The Tribe premiered at the Herbst Theater in San Francisco, it has gone on to screen at various film festivals—Sundance, Tribeca, Silverdocs—winning Best Short Documentary at the Nashville Film Festival, the Audience Award at the Ann Arbor Film Festival, Director's Choice at the Black Maria Film Festival, and Best Historical Documentary/Spoken Word at the San Francisco Women's Film Festival. Now it's part of the 9th UNAFF, screening Saturday, October 28, at 4:45 in the Annenberg Auditorium (Cummings Art Building) at Stanford. I caught it at the Roxie Film Center prescreening and found it to be an entertaining, satisfying and—frequently—laugh out loud funny assemble edit.

There is no doubt in my mind all these years later that my G.I. Joe was just a guised replacement for Barbie. Let's face facts. I stripped his camoflauge uniform off him lickety-split to transform him into a fabulous bare-chested circus trapeze artist! On the very Christmas morning I received him beneath the tree, I threw Joe up into the air to do a triple flip. He landed on the pavement and one of his arms went shooting off somewhere, never to be found again. So now I had the first one-armed fabulous circus trapeze artist!

Even though I admittedly fell within that small percentage of the pie—"Boys who liked Barbies"—I could never come out of the closet enough to actually own one. Let alone afford all the accoutrement required to satisfy her evershifting persona and the fickle hounds of fashion. "Hear! Hear!" a feminist like Gloria Steinem might applaud, even though—according to Jamie Babbit in a recent interview—recontextualizing Barbie and not throwing her away is this season's feminist fashion statement. Babbit would even like to do her own film on Barbie someday.

In recent years, along with discovering that Mad Magazine's ("What Me Worry?) Alfred E. Neumann had been adapted from anti-Semitic Nazi propaganda, I heard a rumor that Barbie as well had been created by a Jewish woman from a German counterpart. The Tribe confirmed this was indeed the case and identified the German doll as Lili. Tiffany Shlain's husband, Ken Goldberg—who co-wrote The Tribe—was on hand at the Roxie prescreening to represent the film and to answer my query about whether or not it was known who had created the Lili doll and what was meant by the film's assertion that the Lili doll was a toy for men?

"Good question," Goldberg responded, "It's a little big vague and I think this is a great topic. As a professor, I think this could be a good master's thesis. I don't know the full history. A friend of mine who is a student in history said the Lili doll—Lilith—is a Jewish reference and was to a kind of loose woman, a woman of loose morals, and it was an association of Jewish women and loose morals that went back. This was the time of German fantasy that these Jewish women were more accessible in some way. He conjectured that the Lili doll was actually in some way linked to that reference, to Lilith, so that it almost comes full circle that Ruth Handler sees that doll and then connects it back and creates this hyper non-Jewish doll." Lilith—as some might know by legend—was thought by some to be Adam's first wife before Eve, a demoness intent upon destroying marriage, tempting men away from their wives. Barbie, as we all know, is much too busy accessorizing to wreck anybody's home.

Goldberg was asked if the wealth of footage in the film was difficult to gather and expensive. It was expensive, he admitted, but they worked with Getty images and they were a great resource. The shots averaged about $500 a shot for 10 seconds so they had to make some hard choices. While they were composing the film they downloaded everything they wanted for free but had to necessarily give up about half of what they really wanted when the time came to actually make the film because it was just too expensive. It was a tradeoff. On the other hand, if they had tried to film certain sequences themselves, it would have likewise been expensive.

Responding to one audience member who admitted—as a feminist—how much she hated Barbie, Goldberg conceded that Barbie is a lightning rod who is certainly reviled by many feminists. Yet Barbie's stature as a cultural icon cannot be denied and exploring why she has such a magnetic force could prove valuable. It's important to ask why, Goldberg reminded us. "As much as you say boys shouldn't have guns and girls shouldn't have Barbie dolls, they still want them. We're trying to understand: what is that magnetism? One of the things that came to us is this idea of projection, of being outside and wanting to be in." For little girls to be part of a big girl world, Barbie factors heavily. For that matter, for little boys wanting to be girls, Barbie factors heavily. And even a fabulous one-armed circus trapeze artist named Joe doesn't quite hold a candle. 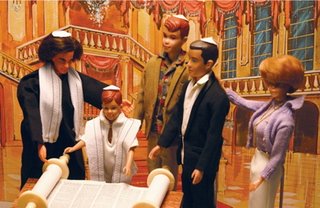 To further engender discussion on the intriguing links between Barbie and being Jewish, the film-makers provide a home screening kit on the film's website that includes a dvd of the film, The Guide from the Perplexed film guide (which amplifies information from the film), and one set of the Tribe conversation "flash" cards. Goldberg reminded us that the kits are aimed at Jewish adults who are in their 20s and 30s and admittedly disconnected from the Jewish faith. He suggested showing the film for friends, having a dinner party, and then placing one of these flash cards beneath each dinner plate to kickstart conversation. He revealed that they had also hoped to include a chicken bouillon cube in the kit but that didn't work out. Notwithstanding, he stressed, they're great Hanukkah gifts.
Posted by Michael Guillen at 10/24/2006 12:03:00 AM