Contributing writer Michael Hawley caught two Roxie Film Center screenings while I was on vacation this last week. He has generously offered the following write-up for The Evening Class.

That's what I overheard a woman say as I left the Roxie Film Center after a screening of the Belgian horror film Calvaire. France, and her French-speaking neighbors aren't especially known for their thriller/horror fare, so it's interesting that two such films—Calvaire and 13 Tzameti—are being shown this week at the Roxie. Both are first-time features for their writer/directors, and while flawed, they each deliver a unique vision of Hell on Earth, marking the emergence of two very promising film-making talents. 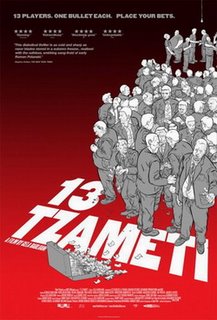 The protagonist of Géla Babluani's 13 Tzameti is a young Georgian immigrant who lives in France and works as a roofer. When his employer dies of a drug overdose, he absconds with a mysterious envelope containing a train ticket and a hotel reservation, all of which leads him to a house in the forest. There, a crowd of nefarious looking men wager on the lives of a baker's dozen worth of miserables, men who participate in a game of group Russian Roulette in exchange for a huge cash prize for the last man standing. 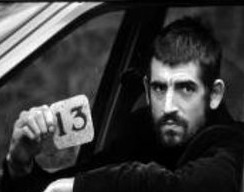 If there was ever a film I wish I knew nothing about going in, it's 13 Tzameti. That would have been next to impossible, however, given that the poster blatantly gives away the "hook," ("13 Players. One Bullet Each. Place Your Bets") and—though the trailer at the film's official website is a teaser—the trailer at Virgin.Net contains the scene with the first Russian Roulette match almost in its entirety. Had I not known where this film was headed, I might have easily overlooked its laboriously contrived set-up, and instead gotten caught up in the anticipation of what was to follow. That first match is brilliantly directed and intensely acted—the film's highlight in fact—but unfortunately, once played out, it's followed by several lesser variations of the same thing, and then capped by a fairly predictable climax. 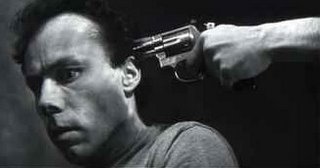 At the least, Babluani is to be congratulated for his highly original concept and unique execution. The rumor is that he's been hired to direct an American remake, and will therefore have a chance to improve on this first attempt. Hopefully, character development will receive a higher priority in the remake, and if we're lucky, cinematographer Tariel Meliava will again be called upon to provide the stark, ominous, black and white, wide-screen look of the original. No doubt a Hollywood "name" will take on the lead role of the hapless roofer, extremely well-played in this version by the director's brother George Babluani. 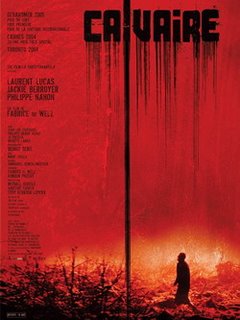 A house of horrors in the forest is also the setting for Fabrice Du Welz' Calvaire. Our protagonist this time out is a low-rent traveling cabaret singer named Marc Stevens, played by Laurent Lucas, who has seemingly become French-language cinema's go-to guy for any film wanting to dish out the creeps (With a Friend Like Harry, Who Killed Bambi, In My Skin, Lemming). We're introduced to him performing at an old-age home, which inspires inappropriate lust from the residents and staff alike. The next morning he flees in his tour van, and like Marion Crane, soon finds himself pulling off the road on a rainy night, taking refuge in a remote motel, er, rather, auberge. 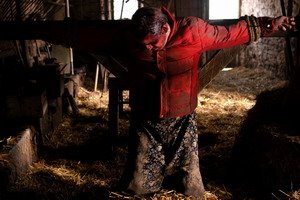 What follows doesn't include a fatal shower, but crucifixion, transvestism, bestiality, quicksand and worse, are all in the works for The Ordeal (the film's alternate English title) poor Marc must endure. And in a tip of the chapeau to Deliverance, there's a nearby women-less village of inbred hillbillies to boot. That, in and of itself would be awful enough, but this village is led by the truly scary Philippe Nahon, the actor who played the lead in Gaspar Noe's I Stand Alone (a role he reprised in Irreversible), as well as the maniac in Alexadre Aja's High Tension. A scene set in the village bar, where the denizens all rise to do a troglodytic dance to cacophonous poundings on an upright piano, is the film's high point, and the most disturbingly hilarious scene I expect to see in any film this year. 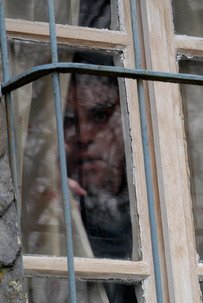 I might mention that my tolerance for filmic gore and torture is moderate at best, but both my eyes remained open throughout Calvaire. I attribute this to Du Welz' delicious dark humor (for instance, the film takes place at Christmastime) and the fact that most of the more squirm-inducing moments are shown in medium shots. Laurent Lucas delivers a crying, squealing, sniveling performance to rival Shelly Duval in The Shining, and the film's artsy, ambivalent ending will irritate genre purists, but it left me happily unsettled and satisfied.

I'd like to take this opportunity to give a shout-out to the Roxie Film Center, which, in its recent reincarnation as an offshoot of the New College of California, has contributed enormously to the exhibition of new foreign language films here in the Bay Area. Now that Landmark Theaters has largely turned its focus towards American docs and indies, the Castro is only showing new foreign films with LGBT themes, and sadly The Balboa Theater has had to largely abandon its foreign film programming, it's a welcome relief to see the Roxie showing many of the films we might not be able to see elsewhere. In addition to the two films reviewed here, in recent months they've brought us 4, Battle in Heaven, Iron Island, Three Times, Gabrielle and Fratricide. Their English language programming is no less adventurous and challenging. CSA: Confederate States of America, Songbirds, Street Fight, and State of Fear are some of the more interesting films I've seen there recently. So everyone, please continue to patronize the Roxie Film Center so they can continue to provide us with this great film programming.
Posted by Michael Guillen at 10/17/2006 01:08:00 AM

Thanks for pointing me here! I've just added 13 TZAMETI to my "must see" list. The Evening Class maze has been well worth my time. ;)