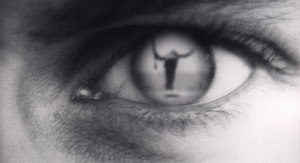 "You who build these altars now to sacrifice these children / you must not do it anymore."—Leonard Cohen

I have long been fascinated by the pupilla of the human eye; that little doll seen in the pupil's dark mirror that serves as the self's iconic referent for the other. All the more intriguing when the "other" is simply the self's longbody image. By which I mean, when one sees oneself at—let's say—the moment of one's death. The marquee poster for Stuart Cooper's 1975 Overlord capitalizes on that longbody reflection and underscores the predestined outcome of young soldiers sacrificed to war, history's most misadorned altar.

That is the subtextual admonition that emanates from Cooper's film on the D-Day invasion of occupied Normandy on June 6, 1944—code name: Overlord. Overlord is screening for one week only at the Balboa Theater, which is entirely appropriate since impresario Gary Meyer had so much to do with recovering this neglected gem from oblivion, as detailed by Hugh Hart in his San Francisco Chronicle article. The film's official website and the Balboa Theater's website do a fine job of linking to the many critical accolades that have sprung up in the wake of the film's revival.

During Gary's introduction at Overlord's Dolby Lab press screening, I couldn't stop thinking how lucky Bay Area cineastes are to have someone like Gary Meyer championing film, and how fortunate Telluride is to have secured him as their official programmer. Meyer—in satisfying his own curiosity about Overlord from a few snippets he caught in the documentary about the short-lived Z Channel cable network—screened the film at Telluride, resuscitating critical interest. Roger Ebert rightfully hailed it as "the most remarkable discovery" from that year's fare.

Ebert was as impressed as I was with two scenes in particular: one where soldiers and their capsized landing boat are battered against rocks by unforgiving waves and the other where "monstrous mechanical wheels propel themselves across the beach to explode land mines and flatten barbed wire. One of these machines is driven by a ring of rockets around its rim, and as it rolls forward, belching fire and smoke, it looks like a creature of hell." Recapitulating his thoughts two years later, Ebert summarized that these military contraptions are all the more awesome for being real. 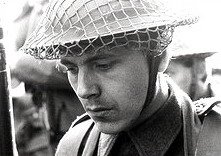 Though Ebert claims the film's poignancy lies in the foreknowledge that the future of protagonist Tom Beddoes (Brian Stirner) is on hold; I think it's more accurate to say that the poignancy lies in the film's inevitable outcome, in its unflinching intuition of Tom's oncoming appointment with Death, and the measure of his heroism—not by actions on the field—but by the rancorless acceptance of his destiny. This elevates his character to an existential nobility. In complete compassion for the elderly parents he will leave behind, Beddoes counters what will be the heartless official notification of his death with a thoughtfully crafted communiqué detailing his awareness: "It's like a part of a machine that grows larger and larger while we get smaller and smaller until there's nothing left."

Few men can approach their death with such calm grace and yet too many men have had to.

Much has been made of the "seamless" interface between the archival documentary footage Cooper gleaned from the vaults of Britain's Imperial War Museum and the fictionalized footage shot by John Alcott (Alcott took great care to use the same cameras and film stock used by the official war photographers on both sides of the bayonet), but I can't—in all honesty—say the effect was seamless. Ray Pride more accurately describes that the obvious juxtapositions between the war's carnage and destruction and Beddoes' seemingly calm preparations for battle "do not jar but awaken the senses." It's the glaring distinction between a personal, subjective story and impersonal, objective reportage and for me there's no sense in trying to blur that line.

The one other surreal touch to the film that moved me was Beddoes' brief dalliance with a young girl (Julie Neesam). The advent of love is always the suggestion of the future, though in this instance the possibilities are sadly curtailed and the chance at love lingers within Beddoes' psyche like the merciful administrations of an angel of death. Again and again she appears to him as if to mollify the danger of his circumstances with a desired reunion. Their fantasized kiss on ship's deck prefigures Death's final embrace.

Overlord is a small gem. Gary Meyer has done the film world a great service in reviving interest in the film and in providing Bay Area audiences a chance to see it as it should be seen, in a newly-restored print on a large screen. Don't miss it.
Posted by Michael Guillen at 10/08/2006 10:32:00 AM