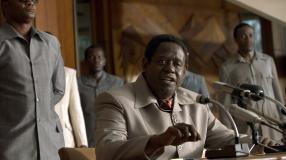 Tomorrow evening's Rafael Film Center opening night screening of Kevin Macdonald's The Last King of Scotland features Forest Whitaker in an Oscar-worthy performance as the charismatic and brutal Ugandan dictator Idi Amin. James McAvoy plays his better half Nicholas Garrigan, a young, naïve, ambitious and fictitious Scottish doctor who strikes a Faustian bargain when he finds himself appointed the tyrant's personal physician. Gillian Anderson, in her supporting role as Sarah Merrit, disproves the theory that blondes have more fun. Braced by solid performances all around and fine technical merits, the film suffers the unfortunate indiscretion of using a white man narrative overviewing a black man's problem. The effort to make the issues palatable for American sensibilities is slightly annoying and offputting, all of which can be withstood just to watch Whitaker reveal Amin's true nature as the film unfolds. 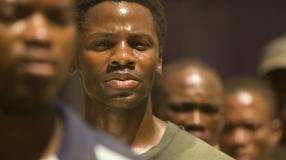 Phillip Noyce's Catch A Fire is likewise structured to entertain even as it educates, introducing Western audiences to Patrick Chamusso (Derek Luke), a power plant worker and devoted family man who—wrongly accused of terrorism—is tortured sufficiently to inspire his about-face. Apartheid was wrong. We all know it. But Tim Robbins delivers a convincingly conflicted performance as the overzealous investigator Nic Vos misguided by his own unflinching principles. Despite these solid performances, the film failed to satisfy me. Its hagiographic dalliance interfered with key plot points, namely the scornful betrayal of Chamusso's wife Precious (Bonnie Mbuli) which insinuates we're not being told the full story about Chamusso's infidelities. The theme of forgiveness—both personal and political—might have had a sharper edge had this not been so cagily downplayed. At film's end we are shown brief documentary footage of the "real" Patrick Chamusso playing soccer with actor Derek Luke. This did not further the fiction in any meaningful way and made me wish the filmmakers had opted for a documentary instead. 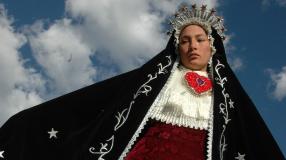 Peruvian filmmaker Claudia Llosa's Madeinusa is that country's strong entry into the Oscars foreign film category this year and—in my estimation—one of the festival's true unexpected treasures. It has an eerie charm about its portrayal of an outsider stumbling into a weekend's festivities of ritual inversions. It's being billed as Peru's Wicker Man, which it kind of is but mainly isn't; its cultural inflection is unique and worth experiencing. Magaly Solier's turn as the title character is a captivating reminder of the lengths an individual will go to escape desperate circumstances.

11/02/06 UPDATE: Acquarello has provided a more in-depth analysis of Madeinusa at Strictly Film School. Acquarello writes: "[B]eyond Llosa's surreal and nightmarish vision of piety, ignorance, and collective hysteria, the genesis of the heroine's titular name itself - a name that, as Salvador argues, is a fabricated name, perhaps derived from encountered "Made in USA" product labels scattered throughout the country - also provides an implicit illustration of the broader human (and sociological) tendency towards cultural exoticism that exists in an environmental vacuum of ignorance, naiveté, and impoverishment. Like the absent mother's secretive (and seemingly, almost mythical) flight to Lima, the city represents an elusive promise land away from the stultifying oppressiveness of an insulated existence. It is this ephemeral destination that Salvador inevitably represents for Madeinusa - not a transitory, but fateful connection with a kindred spirit, but the instinctual location of an elusive, idealized elsewhere." 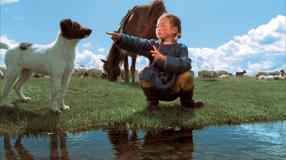 Another absolutely lovely film is Byambasuren Davaa's Cave of the Yellow Dog; a paean to the autonomous spirit of children triggered by the spirit of place. It's structure feels surreptitious, as if the director caught footage on the sly, achieving a remarkably natural portrait of everyday childhood among the Mongolian grasslands. Cave of the Yellow Dog is the kind of foreign film that—like Zacharias Kunuk and Norman Cohn's The Journals of Knud Rasmussen—transports you into another world, singularly exotic in its difference. Cave of the Yellow Dog demonstrates the nomadic aesthetic of breaking down a yurt while Journals teaches you how to build an igloo with a machete. I have no idea where or when I'll have the chance to practice these newly acquired bits of information, but, you never know. The Journals of Knud Rasmussen is mesmerizing, especially the sex scenes with a dead husband, and the poignant and painful transition away from capricious shamanic allies to Christian security. 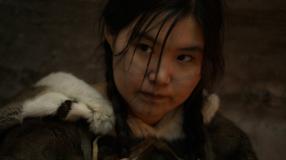 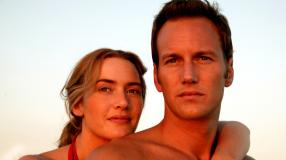 Todd Field's Little Children is overreaching and overdone. But, damn, Patrick Wilson is hot!! Especially when he's humping Kate Winslet in the washroom. Suburban sweat has never been so wonderfully guilty. Ronald McGorvey as the registered sex offender effectively creeped me out. Among the film's various faults is the decision to use an omniscient narrator. Although I understand the film's allegiance to Tom Perrata's novel, I still prefer films to show me rather than tell me. And even with all that effort, I'm still not sure if I got what the movie was saying. Life is a playground and we're all little children? Yes and? 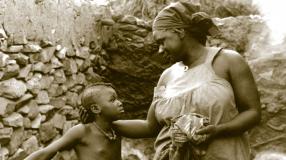 Although I appreciated watching Adama Drabo's 1997 "African classic" Taafe Fanga, especially its exotic village locales, and its heavyhanded though effective deployment of gender farce, I wish the program would have been coupled with something more recent from the region. Especially since the festival is asking Bay Area filmgoers to forsake the Sembene mini-retrospective at the Pacific Film Archives during the same dates.
Posted by Michael Guillen at 10/04/2006 08:12:00 PM

I just saw "The Journals of Knud Rasmussen" and was mesmerized by how wonderful it was. Excellent suggestion.

It really deserves a more thorough write-up than I'm giving it here. When things slow down a bit, I hope to do that.