DELIVER US FROM EVIL—The Evening Class Interview With Amy Berg

Deliver Us From Evil marks Amy Berg's directorial debut. For the past five years, she has produced documentary segments for CNN Investigations and the CBS News program 30 Minutes of Special Assignment. Her work at CBS News earned her Emmy Awards in 2003 and 2004. In 2005, she launched Disarming Films to produce long-form documentaries for theatrical release.

Prior to working at CBS, Berg researched and developed stories for Silver Creek Entertainment, a producer of segments for ABC News. Many aired on Good Morning America, 20/20, and Extra. In addition, she has written numerous articles for the National Organization For Women, the Jewish Journal and a number of monthly and weekly periodicals in America and France.

Amy Berg is currently working on a narrative feature entitled This Is Not America about the decline of the Alaskan culture and the hybrid culture that now exists in the small villages of Alaska.

Shortly before an interview with KPIX, Amy Berg agreed to meet with me at the Roastery in Levi Strauss Plaza to exchange some quick notes about her disturbing documentary, Deliver Us From Evil.
* * *
Michael Guillén: First of all, congratulations on such a sterling first feature and for winning the Target $50,000 award at the Los Angeles Film Festival and the Audience Award at the Mill Valley Film Festival. That must have felt sweet!

Amy Berg: It's great! We've actually had some great success with the film festivals. We won the Patch Film Festival and we won an award at the Boston Film Festival. So we've had a fun run for the festival work.

Berg: It seemed quite suitable for the content. Thank you very much.

MG: I had the great fortune to study with the Dutch theologian Gilles Quispel who—under the behest of Swiss psychologist C.G. Jung—smuggled The Gospel of Thomas out of Egypt. He taught me at that time that The Gospel of Thomas was initially "tainted" with its Gnostic appellation but has since gained credence, so I was pleased to see you quoting from it. It's my understanding that it's the gospel that critiques most directly the concept of apostolic succession.

Berg: Yeah. [Father] Tom Doyle [a canon lawyer and historian who has become a leading advocate for survivors of clerical sexual abuse] has used quotes from Thomas and he has enlightened us a lot on that. It seems to reflect his mission and what he's doing right now.

MG: You mentioned last night during the Q&A that one of your initial reasons for doing this documentary was your objection to the Vatican's strategy to blacklist homosexual priests.

Berg: That was one. Another interesting thing was that I would do investigations for CNN or CBS and—whenever we were about to air—the Church would call our legal department and try to get them to stop it from going on air. They would try to refute things that were irrefutable, in my estimation, like police reports and depositions and really strong accounting. But it happened and it would scare the legal department for enough time to block it a little bit and not allow us to be real reporters. If you ask for an interview with the Catholic Church, they ask you to submit all your questions in advance and then they decide if they're going to answer any of them and they usually only answer what they want and not in a face to face, by email, which is not giving you an opportunity to really report. Most importantly was the fact that this priest was willing to come forward and that was something that we hadn't seen before. I felt his story was very important. 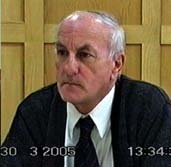 MG: O'Grady's coming forward like that was a unique signature to this documentary. It's my understanding that you had been in telephone contact with him and then he elected to come forward in front of the cameras because of his irritation with the promotion of other members of the Catholic hierarchy?

Berg: When Roger Mahoney went to Rome for Pope John Paul's funeral and Cardinal Law was presiding over the mass, Mahoney and a number of other bishops and priests walked out in protest. It made the news—Mahoney protests Law because of his connection with clergy sex abuse—and O'Grady thought that was inappropriate, being that Mahoney has more priests under him accused of sex abuse. He felt it was hypocritical of Mahoney to do that. Then Monsignor Kane was given a Lifetime Achievement Award recently, last year, and these were the people that [O'Grady] went to when he had a problem and they basically protected him from something that he paid for later.

MG: That's another intriguing angle of the documentary. You're more than fair in your assessment of O'Grady's "problem" and actually the thrust of the documentary appears more to be a critical investigation of all these officials who covered up O'Grady's crimes.

Berg: Yeah. And it could have been any organization. It's more damaging because it's in the Catholic religion but, yeah, you're right.

MG: Your access to O'Grady was amazing. You got him to be so candid and personable. What did that feel like for you? I recently interviewed the documentarians for the Al Franken documentary and I was struck by their being in the middle of this hyper-conservative milieu. What was it like for you to be in the presence of Oliver O'Grady?

MG: A comment was made in your film that there's a psychosocial context for the attraction of priests to younger individuals because of arrested development; that, in effect, they're attracted to someone whose age approximates their state of mind?

Berg: The therapist who said it [Mary Gail Frawley O'Dea] tried to explain to me that basically—when someone is abused—their sexual development ends there, unless they get help for it. [O'Grady] was retriggered because he never got any help for the abuse that he experienced so that—when he was then thrust into the seminary, and he was then in this very sexual arena, and then he saw children as a free man with power—he was back at the age of seven basically, sexually, that's how she explained it.

MG: Another theme of interest to me is the definition of the Catholic "Church." Clearly, your documentary aims at the corruption of the Magesterium but do you distinguish between the hierarchy that runs and governs the church and the church as it is defined by the congregation? 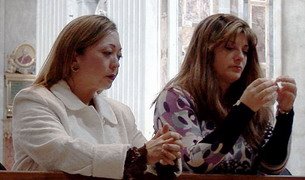 Berg: Yeah. I feel like the issues that I'm addressing in this film are not … there are plenty of global hypocritical issues that I could have attacked that diverge from this but have some relation. I am just looking at how they deal with clergy sex abuse cases in the Catholic Church, that's it, period, and the issue of pedophilia and maybe why he did what he did. I think the congregation and the people are totally separate. The Catholic people that have been coming to these screenings and coming up to me afterwards say, "This is the thing that we are ashamed of in our church. Thank you for giving this some light because we want our church to be a healthy place again. We don't want it to be about sex abuse. We want it to be about why we are here." I think it can be empowering if you look at it like that. There were a lot of Catholic people [at the screening] last night.

MG: I was further disturbed towards the end of your documentary of your reportage that President Bush has pardoned the Pope from any pending prosecution. So much for the separation of Church and State.

Berg: The fact that the Vatican pushed for [President Bush] to make a formal statement is really the issue within that story because, as the head of state, he is entitled to [grant] immunity, that's basically in the letter of the law. It's interesting to make this public proclamation that he's above dealing with this because it just takes the solution out of the mix again. If [the Pope] was the person who was the main responsible party in analyzing these cases and discussing how they would go, he would have a lot of important information that they're just saying, "Oh, he doesn't have to share that."

MG: What do you hope for this documentary? How do you think it will help the Catholic faithful?

MG: Finally, what's on the horizon for you? What are you working on next?

Berg: I'm working on a story about a girl who lives in Alaska, she's a native, and she was a product of our efforts to Americanize the culture. That's all I have so far but I'm working on it. I'm trying to find time to work on it!

MG: Well, good luck with that and congratulations on the success of Deliver Us From Evil.

Berg: Thank you, Michael, and thanks for coming last night.