DELIVER US FROM EVIL—Q&A With Director Amy Berg 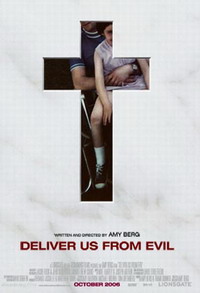 Amy Berg's Deliver Us From Evil opens this weekend at San Francisco's Landmark Lumiere Theater after a successful festival run that scored her the Target Documentary Award and its unrestricted $50,000 cash prize at the Los Angeles Film Festival. Most recently, the documentary won the audience favorite award at the Mill Valley Film Festival. Deliver Us From Evil profiles Oliver O'Grady, a defrocked priest and one of the most notorious pedophiles in the history of the modern Catholic Church. He violated dozens of individuals across California for more than two decades. Despite complaints from several parishes, the Church lied to parishioners and law enforcement and continued to move O'Grady from parish to parish. Remarkably, writer/director Amy Berg persuaded O'Grady to participate in the making of her documentary and he chillingly tells his story without remorse or self-reflection and, in fact, with a truly disturbing twinkle in his eye. Berg also presents never-before-seen footage of the deposition of Los Angeles Cardinal Roger Mahony as well as interviews with former priests, lawyers and the abuse survivors themselves.

I caught a press/word of mouth screening earlier this week where director Berg fielded questions from her agitated audience. Right off one woman wanted to know if there were any studies to indicate if clerical abuse in the Catholic Church had comparable instances in other Christian denominations and in other religious faiths or if there was a higher percentage in the Catholic Church precisely because of the requisite vow to celibacy?

Berg cited cases of sexual abuse in almost every religion with the abuse of power playing significantly into the equation. Generally, however, she said the percentages were much smaller in cases where priests can marry, in contrast to the larger percentage in the Catholic Church where they cannot.

One audience member mentioned that he had read in the news that it was rumored Oliver O'Grady had fled Ireland and was on his way to Canada. Berg said she had read the same rumor last week in the Irish Independent but didn't know if it had been verified.

Berg was asked if the film would be shown in Ireland and she responded that it's scheduled to screen at the Dublin Festival in February with follow-up distribution already lined up in Ireland.

"Has the Catholic Church complained about this film?" an elderly woman queried. "Extensively," Berg quipped and her audience laughed. "They wouldn't talk to me while I was making it and now they can't stop talking about it."

Another gentleman asked if Berg had evidence for the existence of an annuity waiting to be paid to Mr. O'Grady in two years when he reached the age of 65. She stated O'Grady had himself admitted it and that the attorneys have the evidence. That being said, Berg mentioned there is a decent chance that O'Grady might have shot himself in the foot by speaking publicly about the annuity and that he probably won't get it at this point, particularly since—in essence—such an annuity would be funded by the laity. 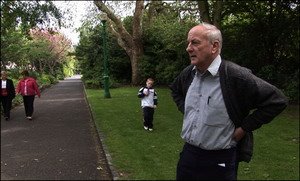 One fellow expressed that the Catholic Church's responsibility was clear and he couldn't understand how the legal system would allow O'Grady to serve only a portion of his sentence for the crimes he committed. He enquired what was happening generally with other cases of clerical abuse and why it was so difficult to apprehend these offenders? Berg deferred to an attorney-friend in the audience to respond to that inquiry. (I only caught his first name, Larry.) Larry explained that the prosecution of hundreds of sexual abusers, including several instances of clerical abuse, were prevented by the U.S. Supreme Court's decision in Stogner v. California, which concluded that retroactive application of the statute of limitations was not constitutional. As a result of that decision, over a hundred investigations in Los Angeles were abandoned and dozens of convicted child molesters were released from prison a little less than three years ago. California has some of the most stringent laws against child molesters in the country but California is still the only state in the United States to have suspended the statute of limitations to allow any sexual abuse victims to file claims against the Church that are over one year old.

A representative of the San Francisco chapter of Voice of the Faithful stood up to indicate their support of victims of clerical abuse. He revealed what he suspected most folks in the audience already knew, that their organization has been given a hard time by the archdiocese of San Francisco. Archbishop Levada, the head of the diocese in recent times, put the word out to his priests that he would not object if they did not allow Voice of the Faithful to meet on church property. Further, they were locked out of the Catholic paper so that when they held meetings, the Catholic paper would not record the fact resulting in Catholics not knowing that the organization even exists. Archbishop Levada is currently in Rome taking Cardinal Ratzinger's place. In other words, he's been moved up. "The reason I'm telling you this here," the Voice of the Faithful representative clarified, "is because this crisis in the Catholic Church is going to continue because our own cardinals and bishops will not address the real problem." 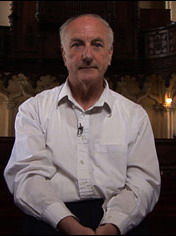 One audience member objected to the scapegoating of gay priests for the pedophilia scandals, adding it has seriously impacted the self-image of the gay subculture. Berg advised that one of her motivations for making this film was when the Vatican issued a statement that they were going to get rid of all the homosexuals in the Church so that they could "solve this problem." But as the documentary attests, Oliver O'Grady liked boys and girls equally and many abusers have the same traits as O'Grady. A new study being conducted by Tom Doyle, Pat Wahl and Richard Sykes shows that it's closer to 50-50 in terms of boys and girls being victims, which indicates the abuse is not so much about sexual preference as it is abuse of power. "It's the difference between sex and rape," she said, "That's the point of this film and the message."

One young man commended Berg's "incredible" access to O'Grady and wondered how she was able to establish such an ongoing "relationship." Even though she knew what he meant, Berg took exception to the term "relationship", which she felt was too strong. Once O'Grady withdrew his offer to meet with his victims so he could apologize to them, his brother asked him not to speak to Berg anymore. Apparently, O'Grady's brother is a famous entertainer in Ireland and he was horrified that O'Grady participated in Berg's documentary because the family name has been tarnished. "I'm sure this is hard for a lot of people to listen to," Berg expanded, "but I've always looked at the fact that he was abused as a child and he was not taken out of the church. He shouldn't have been in harm's way of children. I try to remember the cycle because that's really important. With pedophilia, it's a cycle so that's how I stay balanced with it."

One man objected, admitting he had a hard time with that theory, especially in light of recent events with Congressman Foley. He felt the theory was misused. "I was raped by a priest when I was 14," he confessed, and disclaimed ever having had a fantasy to, in turn, do anything to a child. He's confident that the majority of those who have been abused have, likewise, never had fantasies dealing with abusing children. Such theorizing, he criticized, was not unlike the scapegoating of gay clergy and gays. "I don't agree with that theory at all," he insisted, "That because [O'Grady] was abused, it gives him permission to abuse."

Berg replied that she understood his criticism but that statistically 99% of all pedophiles have been abused themselves so it's a fact requiring acknowledgment.

Berg agreed it was important to make the distinction that—just because you were abused—doesn't mean you're going to abuse. "But it's a separate statistic that we're talking about."

"But I also didn't hear that in your film," the man argued, "and I think it's important to bring that distinction out." If Berg wasn't going to mention it in her film, he felt it was important to bring it up for discussion in audiences such as this.

"I didn't bring up either statistic in the film," Berg qualified, holding to her guns. That's why she elected not to have a narrator, she furthered, she wanted the audience to take the information where they need to take it. She invited the fellow to discuss the matter further after the Q&A.

Omar Moore of PopcornReel.com was present in the audience and he asked Berg if she had a sense—in the course of speaking with Oliver O'Grady and his coming forward to her—if O'Grady felt that by speaking to her he was beginning a process of his own healing? "Because to me, quite frankly," Omar admitted, "I really feel that he comes off at the end as being very smug and arrogant and there's an air, a deep air, of self-denial and self-satisfaction."

O'Grady, Berg advised, was clearly upset with the fact that his superiors to whom he admitted his abuses had since moved up in the Catholic hierarchy, becoming powerful, while he lost the church. He wanted to make an apology to his victims but he clearly did not have the follow-through to execute what he had started. "The dissociation explains it for me," Berg answered, "He's totally disconnected and he doesn't have a real sense of what he feels." 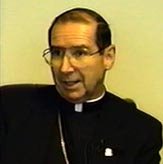 Berg was asked whether Cardinal Mahoney—who seemed to be perjuring himself on screen—would face prosecution for covering up O'Grady's crimes, among others? She said that Steve Cooley, District Attorney of Los Angeles, is working on their case right now and they've told her the film has heightened the excitement. "I know the District Attorney has seen it," Berg offered, "and [Deputy District Attorney] Bill Hodgman's been working for four years on this case and he's only just received some of the documents that he's requested. So they're optimistic." Two new cases have just been initiated where it appears Cardinal Mahoney has basically tampered with witnesses and evidence and has tried to keep priests who were out of the country away from the country so that they wouldn't be prosecuted. In fact, the plaintiff in one of those cases—Luis Godinez—was in the audience. He thanked Berg for the film, which he feels has arrived at the right time. He had been up since 4:00 in the morning, preparing for and the attending a press conference with representatives from SNAP. After the press conference he walked a letter over to the cathedral and dropped it off for Cardinal Mahoney and Todd Tamberg, asking for Tamberg's resignation. "It was a good day," he said, and to finish it off watching Deliver Us From Evil was great. He was tired but his exhaustion was worthwhile.