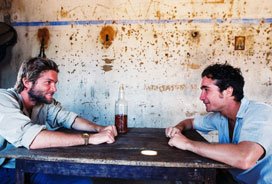 Alice Braga recommended Marcelo Gomes's debut feature Cinema, Aspirinas E Urubus / Cinema, Aspirin & Vultures when we chatted earlier this year at the San Francisco International and, thus, I was delighted when Global Lens announced it would be bringing the film to the Bay Area as part of their 2006 film series.

Developed at the first Sundance Film Institute Screenwriting Workshop in Brazil, Cinema, Aspirin & Vultures won the Prix de Education Nationale at the 2005 Cannes Film Festival, where it premiered. It then went on to win Best Feature Film at the 2005 Mostra BR de Cinema (Sao Paulo International Film Festival); the first Brazilian film to win the top prize (as reported by indieWIRE). Continuing its momentum, it won a Special Jury Prize and Best Actor Award (João Miguel) at the 2005 Rio de Janeiro Film Festival, followed by the Critics Award, Best Brazilian Film at the 2005 London Film Festival. Most recently, it has been submitted as Brazil's entry into this year's foreign film category for the Academy Awards.

Not bad for a debut feature, though understandable when you consider the talent behind the film. Marcelo Gomes co-scripted the successful Madame Satã with director Karim Ainouz and Sérgio Machado (Lower City), and now inverts duties with Ainouz for Cinema, Aspirin & Vultures.

Born in Recife, Pernambuco, in Northeastern Brazil, Marcelo Gomes studied filmmaking at Bristol University in the United Kingdom and produced his first short, Maracutu Maracutus in 1994. Continuing what appears to be the theme of the week—hardcore punk rock—Gomes likewise produced the documentary Punk, Rock, Hard Core (1996). Cinema, Aspirin & Vultures was inspired by tales told to Gomes by an elder relative Ranulpho Gomes, author of Tales of a Journey. 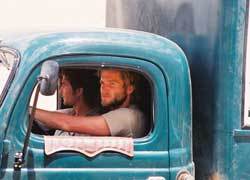 The film's look is its first hook. It "blooms open" (as Brian Gibson states it)—that is, gains contrast—as the reflected face of the driver of a bashed-up Bayer Aspirin van rumbling down a dirt road emerges from a completely washed-out, white background. Cinematographer Mauro Pinheiro, Jr. effectively employs a blanched palette to simulate the scorching intense heat of Brazil's desert-like Sertão (Portuguese for "backland"). You can feel the searing heat and taste the suffocating dust. You want to roll the window down as you motor through what Manohla Dargis calls "the blindingly white light of a country that seems on full boil." 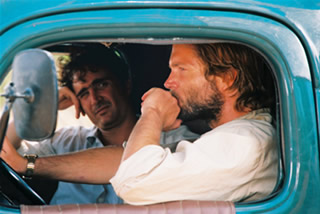 "When Brazilian cinema goes searching for its soul," Tom Moore writes knowingly for Brazilian Film Review, "it does not look in Rio, or anywhere in the more modern south and southeast [the Zona Sul]. It heads to the interior, and more specifically to the Northeast, to the Sertão." It appears, then, that Brazil's soul is the color of thorns, specifically the caatinga, the "white thorn forest" that serves as an existential reflection of human endeavor, replete with rattling vipers, noxious insects and scavenging vultures circling above.

Peter Martin—reporting to Twitch from the film's North American Premiere at the AFI Fest—sifted from that screening's Q&A that Gomes and Pinheiro intentionally overexposed the film. "As a result," Martin writes, "the bleached-out, harsh glare of daylight gives way to a look that still simmers after the sun goes down." Still, not all the critics are impressed with this stylistic choice. Ed Gonzales, writing for Citypages, asserts: "The film's blown-out color scheme has been praised for all the wrong reasons: Gomes isn't illuminating the world, but distracting himself from the moral and emotional clarity of Brazil's Cinema Nôvo triumphs."

The driver is revealed to be Johann Hohenfels (Peter Ketnath), a handsome young German who—afraid to die and unwilling to kill—flees Germany just before the war breaks out, signing on as a ship's waiter and making his way to Brazil. It is 1942 and he has found safety, albeit temporarily, working in the Sertão, traveling from town to town selling not only a new miracle pain-reliever—aspirin—but cinematic technology as well. Most of these backland villages have no electricity and most of the sertanejos have never seen a movie before. Peter Martin astutely suggests that the vultures of the film's title might refer—not so much to desert carrion—as to the "corporate vultures" who have decided the sertanejos might be easy marks for their new product through this unfamiliar technology. Tom Phillips, writing for Brazzil Magazine, categorizes Johann's tactics as "malandragem (cunning) of which any Brazilian would be proud." Clearly, Johann's audiences are fascinated by the propagandized commercials he projects on a makeshift screen (a strung-up sheet) and patriotically cough up the little they have to purchase "O fim do todos los males."

Enter the pessimistic yet ambitious Ranulpho (João Miguel), hitchhiking away from his drought-plagued hometown of Bonança, which Donald Levit translates—ironically—as Bonanza. Ranulpho describes Bonança as "five houses, a cross in the road." He dreams of starting up a new life in Rio de Janeiro and recognizes in Johann an opportunity to further himself and to ultimately achieve his destination. He ingratiates himself as a camera assistant and agrees to travel with Johann to Triunfo ("Triumph"), Johann's destination.

Upon its Cannes premiere, Variety's Deborah Young observed that João Miguel's turn as Ranulpho "brings a droll note of humor to . . . a character who embodies the hard times Brazilians in the Northeast were living through, but also of their will to find personal happiness." She adds that the friendship between the film's two male leads "is etched with a quiet delicacy that deepens to touch their souls." 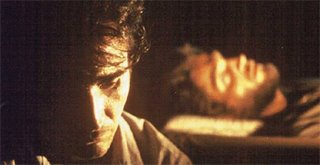 Their friendship develops despite their initial differences. Johann finds the Sertão interesting and has an adventurer's curiousity in strangers, frequently stopping to offer lifts to sertanejos on the road. Ranulpho despises the landscape of his birth and has little interest in his fellow countrymen, who he considers ignorant and backward. He criticizes Johann for offering rides, disregarding that Johann offered him one. Where Johann has a sweet, positive outlook, Ranulpho's is negative and sour. Ranulpho envies Johann's ability to create a life for himself through his employment with the aspirin firm and longs to do the same, even though he cannot drive. One of the scenes I found most endearing was one where Johann and Ranulpho give a lift to a young woman. Her presence creates an "erotic triangulation" that—per Sergio de la Mora—both facilitates and blocks the physical and affective ties between the two men. Ranulpho's clumsy attempts to dalliance with her are both embarrassing to watch yet heartwarming. Johann wins out of course and Ranulpho spends a grumpy night listening to their lovemaking.

Yet it is precisely the intensity of their differences that lead them to a common denominator. They each desire another life, which—at least on the surface—looks surprisingly like each other's. By movie's end they have crossed over and through each other to achieve their dreams.

Tom Moore notes: "Johann's journey is inward, leading far from his German roots, and Ranulpho is heading outward." Brian Gibson poetically notates: "Cinema, Aspirin & Vultures is about the end of the road, about paths diverging, when travellers' time together can only be brief. Maybe cinema can best capture, through its strangely haunting, ephemeral, flickering eye, the dreamy briefness of a friendship forged, and forsaken, en route to separate futures."

Manohla Dargis is most evocative, however. She notes that each "quotidian moment" of the duo's journey "seems to tremble with mystery and possibility." She questions that the two truly even have a friendship but that their interaction is more a process of peeling away "layers of national, social and class differences, tentatively breaching their divide. In time, these strangers become less strange to each other, if never friends, even while their prickles remain firmly in place." She concludes the film is more about "unremarkable individuals who survive extraordinary times rather than triumph over them." Though it's hard not to think of triumph when—from Triunfo—Johann flees yet again from the war's encroachment into the anonymity of the Amazon, bestowing upon Ranulpho his beat-up van, his projector, and his acquired skill of driving. As Ranulpho kicks the van into gear and begins to drive, the film returns to white light, even as Ranulpho breaks into an incandescent grin.

There's one final aspect I must mention regarding Cinema, Aspirin & Vultures and that is the atmospheric period music, presented on the scratchy radio the two men play while driving. Inbetween encroaching bulletins regarding the war's advance on Brazil, the songs feebly divert and distract from Brazil's inability to remain uninvolved, finally forcing Johann's hand to escape into the Amazon or be returned to Germany and conscripted or imprisoned within Brazil. Several samples of the music can be found at the film's official website where the radio is graphically replicated. As the website indicates: "A phonographic study was conducted before filming began, which contributed greatly to the screenplay of the film. Priority was given to such singers as Carmen Miranda and Francisco Alves, who feature heavily on the soundtrack. The musician Tómaz Alves Souza, composed the original music, using typical instruments of the time, such as the period accordion."

Bay Area audiences have one last chance to see this small gem of a film. Its final Global Lens screening will be at the Rafael Film Center on Wednesday, October 4, at 6:30 p.m. I highly recommend the opportunity as I'm not confident the film will appeal past its festival life.