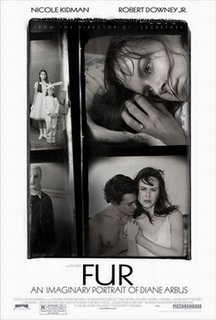 Beauty, they say, is only skin deep. Beauty, they say, is in the eye of the beholder. And if you were able to organize them for—let's say—a group portrait, "they" would undoubtedly all wear furs and masks and harbor secrets. "A photograph is a secret about a secret," Diane Arbus once said, "The more it tells you the less you know."

Then again, when Beauty is in the eye of the Beast, the deception of appearances reigns paramount and its anyone's guess how the terms apply and whether the veneer of civilization truly is as thin as human skin. 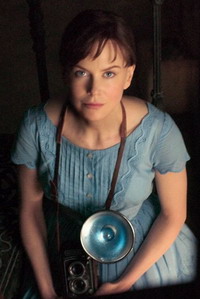 As capably as an M.C. Escher study on shifting perspective, the thematic tropes burrow in and out and through each other in Steven Shainberg's Fur: An Imaginary Portrait of Diane Arbus. In the film's opening sequences Diane (Nicole Kidman) and her husband Allan (Ty Burrell) are hosting a fashion show for her wealthy furrier father's upper class friends. Diane wears one of her father's furs and wears a dress her mother gave her the year before buttoned up to the collar. The propriety is stifling her. Secretly, she longs to bare her breasts in full view of the neighbors. Eventually—after requesting permission to photograph a colony of nudists and discovering after she has arrived that one of the prerequisites is the removal of her own clothing—Arbus gives herself "a moment" (within which the film transpires) and achieves a literal naked freedom by removing not only her clothing but—as Variety's Todd McCarthy puts it—"some vestment of propriety."

Persona is a mask. And propriety is the most proper of masks. What is impropriety then? Another form of stark honest nakedness? The removal of one mask for another? Are masks lies? Are secrets masks? It's a mask that leads Diane to encounter her newly-arrived upstairs neighbor Lionel who is both honest and hirsute. Thus, honesty is not always naked and if Lionel's chestnut tresses are shaved in the film's final scenes it's for practical purposes, not necessarily confessional ones. Nor strictly for appearances. Robert Downey, Jr.—in a turn that would make Burt Lahr envious—reminds again that his capabilities as an actor remain seemingly limitless. His body of work is becoming almost magical. How he can hold our attention with the sad liquidity of his eyes and the confident understatement of his voice is astounding. Nicole Kidman, likewise, delivers one of her finest performances. Shane Danielsen has written that Kidman "does sexual hysteria better than anyone since Deborah Kerr"; intelligent, wary and refined like Kerr but also brittle, and tightly wound, and much of that is here, as Diane struggles to break free of convention to creatively photograph the unconventional. 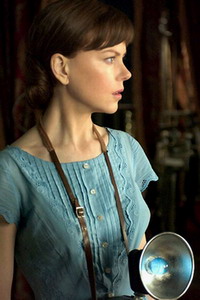 Todd McCarthy notes that Carter Burwell's "frisky score, with its inventive orchestrations and strong sense of movement, is a big plus." I agree and I kept waiting for him to include a sample of Missy Elliot's "Get Your Freak On." It would have worked for me. Because if you had to choose one word to describe not only the body of photographer Diane Arbus's work and the "imaginative solutions" director Shainberg employs to tell the story of her awakening as an artist, it would have to be "freak." Yet what does that mean exactly in an age where terms—once derogatory—are recontextualized, politicized, to celebrate and honor difference? The film asks the obvious through the imagined: who is the most freakish? An upstairs neighbor pelted with fur? Or cruel staid socialities wearing fur? Again, the veneer of civilization wears thin when, in truth, it should probably wear nothing at all.

Now, as film critic Max Goldberg pointed out to me before today's screening of Fur, Susan Sontag would totally have disagreed with me on this and it's my loss, really, that she's not alive to rip me to shreds in her avid defense of the original meaning of the word "freak." Sontag's notorious 1973 essay attacking Arbus became the linchpin of her book On Photography. In his March 2005 essay for The New Yorker, Peter Schjeldahl quotes Sontag as saying: "Arbus's interest in freaks expresses a desire to violate her own innocence." Schjeldahl concurs that Sontag is probably right but—like myself—questions whether the idea of "freaks" is a "stable category of experience." Notwithstanding, Schjeldahl writes: "Sontag rushed to rescue the idea. 'In photographing dwarfs, you don't get majesty and beauty,' she insisted. 'You get dwarfs.' She noted with bemusement that in Arbus's pictures people who are 'pathetic, pitiable, as well as repulsive' look 'cheerful, self-accepting, matter-of-fact.' She wondered, 'Do they know how grotesque they are? It seems as if they don't.' They 'appear not to know that they are ugly.' It's an interesting complaint, suggesting that people who look or behave in unusual ways merit sympathy from the rest of us only if they visibly assent to our disgust with them." Were she alive today, Susan Sontag's review of Fur would be hotly anticipated. Since we're in the realm of the may-have-been; that's my fantasy.

In her own defense, Diane Arbus offered, "There's a quality of legend about freaks. Like a person in a fairy tale who stops you and demands that you answer a riddle. …Most people go through life dreading they'll have a traumatic experience. Freaks were born with their trauma. They've already passed their test in life. They're aristocrats."

More high points for cinematographer Bill Pope's roving camera through Amy Danger's carnivalesque sets. Just as Todd Browning's Freaks used the circus carnival as a contextual setting for difference—a place without limits, one might say—so does Danger create a set that contextualizes Diane's alternate emerging world. And if this film truly is a conjecture about what might have been happening in Diane Arbus's psyche at this juncture in her life, how appropriate that the carnival setting should be easily accessed by a collapsible ladder leading into the attic. 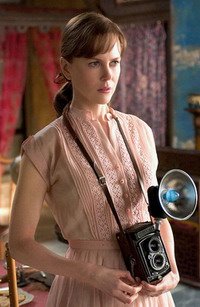 As David Thomson said it would be, the ending is partially problematic. It all becomes a little obvious. All these different kinds of skin, naked ones, furry ones, ones worn as fur, ones worn to counter loss, skins you don't quite feel comfortable in, and Diane's own skin which she finally feels comfortable in. But a frisson swept across my own skin watching this movie recognizing how—like David Thomson's "biography" of Nicole Kidman—the may-have-been becomes the exalted fount of creativity rather than the tried-and-true what-has-been. The stories of our lives and the lives of others will never be the same. Then again, should they be?

One final focus: the movie is thrillingly riddled with trivia. Kim Voynar at Cinematical has already pointed out that the real-life older brother of Diane Arbus, under whose shadow she lived for many years, was the famous poet Howard Nemerov (who I adored in college). Kim also notes that Diane's husband Allan "later became an actor, most famously playing Major Sidney Freedman on M.A.S.H." And Peter Nellhaus—who finds it impossible to keep his opinions to himself—sent me an email today advising that Allan also starred in Robert Downey, Sr.'s film Greasers Palace. But then, I might just be splitting hairs with all that.

Thanks for the review. I have been really anticipating this for a while now. Big fan of Kidman and Downey Jr.

Thank you for your review!

I find it interesting that you quoted Todd McCarthy (Variety) seemingly reluctant positive review and Shane Danielsen's debate with David Thomson on Nicole Kidman, a debate where it seems Danielsen is also reluctant to give Kidman her dues as an actress despite listing so many wonderful qualities that make her the kind of actresss that she is.

I am looking forward to this movie and hope Shainberg, Kidman, Downey and others are recognised for this unique work I have been reading about. After being snubbed by AMPAS in regards to Dogville and Birth, I wonder if AMPAS would even look at Fur and recognise Kidman, Downey for their efforts.

Thank you both for stopping by. When you have a chance to see the film, please come back and let me know what you think.