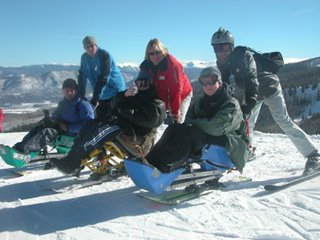 The official 9th United Nations Association Film Festival kicked into gear today and continues on the Stanford campus through Sunday, October 29, 2006. What follows are some recommendations from what I caught at the San Francisco prescreenings.

In her preview for the Greencine Daily, Hannah Eaves commended the UNAFF's "refreshing" parity of short documentaries alongside longer fare, particularly in the case of Tom Eldridge and Annalisa Hodgkins' 8½ minute Beyond Iraq, which celebrates the tenacious spirit of disabled vets as they learn to ski, snowboard and sit-ski the snowy Rocky Mountain slopes of Colorado through the Challenge Aspen program. With no regrets about the hand dealt them in the service of their country, and no time for self-pity during their rehabilitation, these severely-disabled veterans conquer their wary skepticism to explore opportunities for athletic expression and spiritual recuperation. 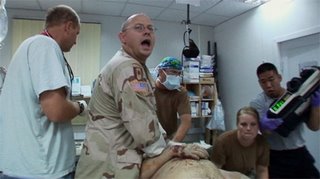 That's the "after" picture once vets have decided to move on with their lives, committing themselves to recovery. The "before" picture—or, I should say, the "during" picture—is not as enjoyable to watch. In fact, I strongly caution the weak-stomached to think twice about watching Jon Alpert and Matthew O'Neill's Baghdad ER. Hannah says whoever comes to watch this film should bring a handkerchief and, yes, the documentary might move you to tears, if it doesn't move you right out of the theater first. It is perhaps one of the most difficult pieces of film I have ever sat through. I was squirming in my seat and every now and then had to avert my gaze. For someone who is such a fan of the horror genre as I am, I found it nearly unbelievable how true dismemberment, amputation, blood and guts—divorced from entertainment value—are difficult to stomach.

At the same time, the humanity exhibited in this film conforms to the festival's objectives. The dedication of these surgeons in the 86th Combat Support Hospital to save lives and salvage damaged bodies lends to the somber—though important—statistic that wounded troops in Iraq have a 90% chance of survival, the highest rate in U.S. history. The gallows humor necessary to survive emergency and operating rooms that resemble the kill floors of a slaughter house hardly alleviates the extent of the carnage. Severed fingers, hands and arms are carried off. Eyeballs are stitched up. Wounds are opened up and probed for shrapnel. Young soldiers die on gurneys despite valiant attempts to keep them alive. It's visually intense and—as I mentioned—not for the weak. You feel for doctors coping with an endless onslaught of wounded human beings even as their own humanity is curtailed to a one-block radius and the occasional rooftop cigar break. Essential, but truly difficult, viewing.

UNAFF founder and executive director Jasmina Bojic advised that the festival received nearly 25 documentaries relating to the Iraq War this year and the above are two of the three chosen. Beyond Iraq and Baghdad ER screen Friday, October 27, 2006, at 8:20 and 8:40 p.m., respectively, in the Annenberg Auditorium (Cummings Art Building), Stanford campus. 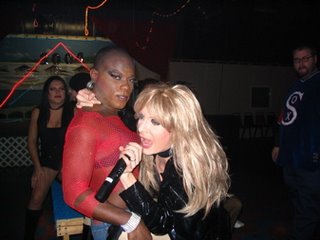 Malcolm Ingram's Small Town Gay Bar reflects a different kind of resiliency and a different battle zone altogether, namely the back woods of Bible Belt Mississippi. Urbanite that I am, I have trouble understanding why queer folk would remain in such small towns (I took off like Ricochet Rabbit first chance I got) let alone make a bar a frequent hangout. But when it's all you've got, you welcome the chance to congregate among your own kind, I guess. Still, the issue of why they remain is largely unexplored in this documentary, which might have made it a more powerful piece of reportage. Small Town Gay Bar screens on Saturday, October 29, 2006, at 10:00 p.m., Annenberg Auditorium, Stanford campus. 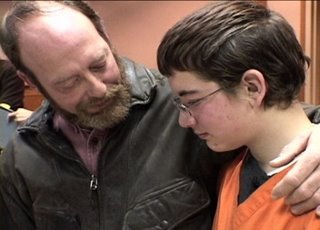 Diminishing resources for mentally ill youth is the thrust of Karen Bernstein and Ellen Spiro's Are the Kids All Right? Of course, they're not. How could they be when legislators keep cutting funds and social services? Add this topic to America's heap of shame. Early scenes that show the emotional breakdown of a young Chicano boy was almost more than my heart could bear. This documentary provided few answers but it sure as hell painfully articulated the question worth repeating. Screening Sunday, October 29, 2:30 p.m., Cubberly Auditorium (School of Education) on the Stanford campus.