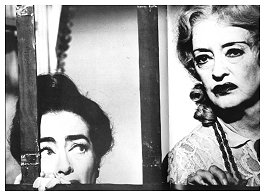 Imagine this. You are a young, naïve gay boy recently arrived in San Francisco during the mid-70s. On one of your first dates you are invited to a screening of Robert Aldrich's Whatever Happened to Baby Jane? at the Castro Theatre. The palatial moviehouse is filled with an unruly audience of hissing queens. You feel you have been thrown into a snakepit and have deep concerns about your safety. They seem to have no self-control and laugh at things you consider worthy of serious attention. But eventually you begin to understand. This is not just about politely watching a movie on a screen. This is about an interactive movie experience and a stellar example of audience reception. It all comes home when pitiable Joan Crawford whines: "You wouldn't be able to do these awful things to me if I weren't still in this chair!" Without missing a beat the entire audience shouts out in glee: "But ya ARE, Blanche! Ya ARE in that chair!" The ensuing raucous laughter is as thrilling as a hallucinogen.

One of my most treasured cinematic memories! And among one of my most treasured cinematic paraphernalia is a hardbound first edition autographed copy of Joan Crawford's autobiography, A Portrait of Joan, published in 1962; the same year Whatever Happened to Baby Jane? shocked American audiences. Sadly, the last movie Joan mentions in her autobiography is the 1959 vehicle The Best of Everything—Whatever Happened to Baby Jane? hadn't been filmed yet—and just as unfortunately she doesn't even mention Robert Aldrich and their earlier collaboration Autumn Leaves (1956). So as ardently as I'd hoped to offer some key anecdotes by Crawford on Aldrich, the source is not forthcoming. 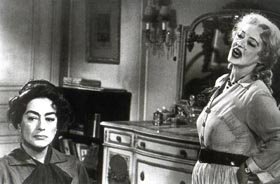 Nor am I versed enough in Aldrich's oeuvre to offer much insight into his films. But I thought it would be fun to explore a bit why Whatever Happened to Baby Jane? has had such an impact on "gay sensibility" and why—even for Advocate editor Alonso Duralde—it required inclusion into his 101 Must-See Movies For Gay Men. Is it, as Alonso suggests, that gay men admire strong women or—"almost a necessary corollary"—that gay men like watching strong women fall on their face? Paraphrasing Alonso, when Joan Crawford or Bette Davis dream big and fail, they fail big and any self-respecting gay man wants to be in the front row.

Why is that? Far be it for me to speak for such an unruly and diverse bunch as gay men, or to hazard essentiality by suggesting there is any such thing as a bona fide gay "sensibility", but—as far as stereotypes can help to define things—gays employ gossip as a form of social critique, which is to say as a form of entertainment against the forces that too often critique them. So as Alonso points out, "gay gossips know just how much Davis and Crawford always hated each other offscreen, so watching them humiliate and abuse each other in their only costarring film is always a hoot."

Perhaps it's not all quite that sordid and cruel as it first appears. Perhaps—as David Thomson stated it more respectfully at a recent bookstore appearance—audiences appreciate that being a movie star is not always as glamorous as might be believed. It's a hard life after all. "Any fan of Bette Davis and Joan Crawford know they both ended up pretty wretched," he said, which is to understand that life itself is hard after all. If you don't believe me, consider how Aldrich had to shop the project around to various moguls who responded by asserting—according to Bette Davis's recollection—"We wouldn't give you a dime for those two washed-up old broads." 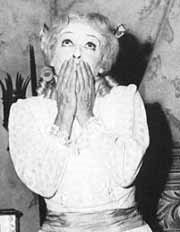 Photographer, film historian and author Mark A. Viera's Bright Lights Film Journal essay on Whatever Happened to Baby Jane? is possibly the definitive treatment of this film. Certainly, it's one of the most entertaining and informative; I highly recommend it. He astutely notes: "The script could have served any number of aging actresses—Myrna Loy and Rosalind Russell, Norma Shearer and Miriam Hopkins, even Greta Garbo and Marlene Dietrich—but they might have made it a psychological study, a melodrama, or a tragedy. What Crawford and Davis brought to it was a distillation of their own well-known personas." That distillation is the heady brew that gay gossips get drunk on. His tidbit that the wig worn by Bette's Baby Jane that "apes her childhood mop of curls" had originally been worn by Joan Crawford in Our Blushing Brides (1939) is priceless. As well as his recount of what happened on Oscars night. Matthew Kennedy has described the Davis/Crawford on and off-screen Baby Jane performances as "a sadomasochistic tango." "Cinema chicken" Bob Westal's own off-the-hip reaction to his first viewing of Whatever Happened to Baby Jane? induced some wry chuckles.

As an aside, Bright Lights Film Journal's editor Gary Morris has likewise written an excellent queer read of Aldrich's The Killing of Sister George, which I would also recommend.

I might further suggest the Aldrich profiles at They Shoot Pictures, Don't They? and Senses of Cinema. 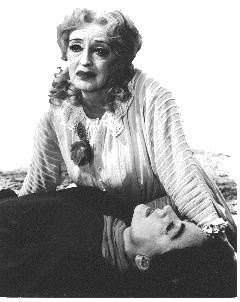 So there you have it. A meager and belated entry into the Aldrich blogathon, I admit, but I just couldn't have the rest of you gossiping, "Whatever happened to Maya?"
Posted by Michael Guillen at 10/19/2006 12:00:00 PM

Great post, Maya. That is quite a memory. I can see why you haven't forgotten it!

Heh. Some memories are just baggage but others, like this one, are carriages.

A fun read yourself! And now I understand your comment. (I have a very short memory!)