ONCE—The SF360 Interview with John Carney, Glen Hansard and Marketa Irglova (and a Personal Aside) 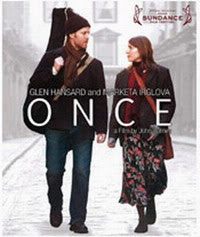 In tandem to my SF360 interview with the creative team of Once, I offer this personal aside:

During the course of my conversation with John Carney, Glen Hansard and Marketa Irglova, I mentioned to Glen that compensation for being a film writer is minor and that the true reward lies in the perks, primarily in meeting the creative agents behind any given film; in the case of Once, Glen Hansard specifically. A couple of years back recovering from a hospitalization and an emotional meltdown, I fled to Paris where—in a moment of divine prescience—I had reserved and paid for an apartment months in advance. I hid out in that apartment raging at the out-of-control forces in my so-called world, licking my wounds and listening to music. One of the albums that soothed me during that stay was Lisa Stansfield's The Moment on which her cover of "Say It To Me Now" spoke to me, spoke for me. Its defiant core of outrage served my state of mind and helped me heal.

So imagine my surprise when in the first few scenes of Once Hansard, the song's creator, belted out a raw angry version via his busker persona. I only knew the song from Stansfield's album so I hadn't made the connection to The Frames or Hansard. "Of course not," Hansard understood, "Who would?" But the perk of being a film writer and talking to you about Once, I explained to him, is that I now get to sit face to face with you to thank you personally for a song that was such a lifeline during a difficult time in my life and that meant so much to me. Hansard was amazed by my connection to his song, turned to Carney and the two of them bantered about how my story confirmed for them something they had just been discussing about the powerful longevity of music and its capacity to reach people over long distances and time. 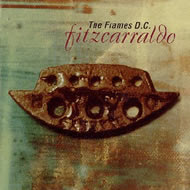 Aware that "Say It To Me Now" has also been part of Hansard's repertoire for some time, originally recorded on The Frames' second album Fitzcarraldo in fact, I was intrigued by its surfacing in the film all these years later. I asked if he could give me the back story on the song.

"I remember writing the song at the time for my grandmother. My grandmother and my grandfather used to fight continuously. They must have been really deeply in love because they just fought and fought and fought and quite passionately argued all the time. Then my grandmother died and it was one of those strange things where my grandfather just fell apart; but yet you would say they never got on. Do you know what I mean? And yet there must have been all this love. In a way I wrote [the song] for them and, again, just the whole thing about relationships and revenge and the idea that, 'We've split up and you've gone and done the one thing that I would hope you wouldn't have done. You've stuck the knife in and now it's warped.' That's part of the revenge—'Is this what you've waited for? Your chance to even up the score?'—and that's the song. It's in some ways positive; it's like, 'Fuckin' bring it on.' I guess that's what the song says. If you have something to fuckin' say to me, say it now. That's the way I was feeling at the time. 'I can fuckin' take it. I can take the truth but I can't take all the lies.' " 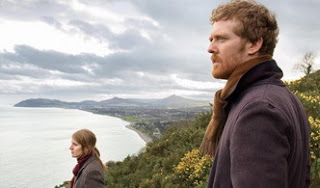 Later that evening I showed up for the screening of Once at the Roxie Film Center where Carney fielded questions from the audience and Glen and Marketa sang a few songs from the film. Imagine my surprise—and delight—when Glen started out their mini-concert by dedicating "Say It To Me Now" to me! Confirming that it's true, then, that for film writers like myself the rewards are in the perks, as well as in the healing.

It's all about connecting through different art mediums, so well summed up by your personal aside, making your 'personal' aside (un)ironically a universal aside.

Sweet, very sweet. Once is screening at the Melbourne International Film Festival under the International Panorama. I'll be sure to check it out in reference to your comments.

Michael, I'm reading terrific book right now called "Movie Mutations that I think you'd love, by Jonathan Rosenbaum and Adrian Martin. Kent Jones has a piece in it about the connections between music and movies and movement that speaks a lot to the way music melts time and distance between people.

Thanks for the kind words, guys. It counters the bitchery over at Twitch.

Paul, let me know when you post your response; I'd love to read what you have to say.

TB, that book sounds great. I'll look for it.

No sweat, Michael. I had also heard very good things about that book and bought it some time ago on Amazon. It's waiting patiently in line on my bookshelf and will get a read sometime this decade (hopefully).

I was completely stunned by the film, and the gorgeous music that was so essential to it. I was also only familiar with 'Say It To Me Now' as an extremely beautiful Lisa Stansfield number..that girl can belt it like virtually no other.. , but this version just BLEW the top off the roof. I'm in love with this film.

Michael, thanks for hailing in from Austin. I concur. I love the film and love the music. Finally when out and bought the soundtrack even though most of the cuts are available on the website.

Glen's version of "Say It To Me Now" is much much angrier than Lisa's, eh? I love them both. But I'll always have an affection for Glen's version now since he dedicated it to me in his mini-concert.