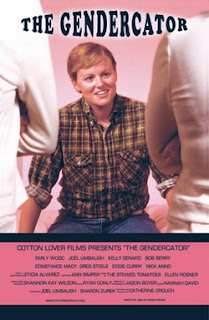 Along with the "Strandful" of films I've previewed for Frameline31, my editor Susan Gerhard has interviewed programmers Michael Lumpkin and Jennifer Morris. I'm proud of her for enquiring after "the emotional trajectory" of settling the controversy surrounding the 15-minute short—The Gendercator by lesbian filmmaker Catherine Crouch—which resulted in the film being yanked from the festival line-up and an apology offered to the GLBTQQ community a few hours after the press conference late last month.

Morris admitted the emotional trajectory was "hard" and Lumpkin concurred that removing the film from the line-up under community pressure "was probably one of the hardest decisions we've had to make."

Matthew S. Bajko at the Bay Area Reporter has done a fine job of detailing what exactly about Crouch's short was seen as transphobic and—in light of arguments transman Jed Rosenthal Bell had against B. Ruby Rich when I interviewed him last year—I found the controversy compelling.

As Bajko reported: "In a director's note published on her Web site, Crouch wrote that 'Things are getting very strange for women these days. More and more often we see young heterosexual women carving their bodies into porno Barbie dolls and lesbian women altering themselves into transmen. Our distorted cultural norms are making women feel compelled to use medical advances to change themselves, instead of working to change the world. This is one story, showing one possible scary future. I am hopeful that this story will foster discussion about female body modification and medical ethics.' [...] Crouch does not hide the fact that she suffers anxiety over seeing fellow butch or tomboy lesbians opt to transition into transmen and undergo reconstructive surgery. [...] 'My anxiety is about the amount of women I see transitioning into men and how fast it seems to be happening. I wonder about this sudden escalation. They are women, or they were women, and now they are not,' said Crouch. 'They seem like me, so I am not understanding what is the difference between them and me.' "

The escalating tension between some segments of the transmen community and the lesbian community over the issue of women physically transitioning into the male sex is one of the most polarized edges of the queer community. Transgender scholar and filmmaker Susan Stryker supports Frameline's decision to yank the film, calling it "classically transphobic" in how "[i]t repeats all of these stereotypes that have been kicking around for 40 years now. It is basically the same stereotypes of trans people articulated in The Transsexual Empire by Janice Raymond in 1979 that said transsexuals are in collusion with politically reactionary forces." That collusion is configured as the notion that what transsexuals are doing "is an anti-feminist, anti-queer thing." Initially aimed at men transitioning into women and seen as a plot on the part of men to infiltrate the women's movement, Raymond's manifesto now aims at transmen, insinuating that women who become men have bought into patriarchal models of identity.

Perhaps the most eloquent rebuttal to the manifesto of "The Transsexual Empire" is Sandy Stone's 1991 "The Empire Strikes Back: A Posttranssexual Manifesto."

What intrigues me as a gay male are the articulations required by transsexuals to differentiate their sovereignty within a larger queer umbrella. I listen raptly to Stryker's eloquent criticism that "Frameline has actually tried over the years to be trans-inclusive. I don't think it has always gotten it, it's been more of a liberal accommodationism. As an organization Frameline still imagines gay and lesbian as the center of what it is they are doing and that intersex or trans or kink or fetish or whatever initials are in the queer alphabet soup are add-ons to the central focus." On the other hand I respect Michael Lumpkin's disagreement with such characterizations of Frameline and Frameline's assertion that their staff is "deeply committed to promoting the work of transgender filmmakers and films about transgender issues." Frameline Distribution distributes over 20 transgender themed films and over one third of its free monthly Frameline at the Center screenings have been transgender themed.

To further amplify community diversity, The Gendercator will be shown at New York's Newfest despite protests from the transsexual community.

06/15/07 UPDATE: My friend Emily Hoyer has alerted me to the continued upset about Frameline's decision to yank The Gendercator from this year's line-up. Letters have been pouring into the B.A.R. She pointed me to Jewel Gomez's comments, with which I strongly concur. Like Jewel, I'm sorry for the hurt and anger felt by transpeople who watched the film. Anyone who's ever been marginalized recognizes the pain of misunderstanding's serrated edge. But exclusion and omission is just as serrated. Like Jewel, I wish Frameline would have seized the controversy to offer a public dialogue between lesbians and transmen. I would have been a fascinated fly on the wall during such a dialogue.
Posted by Michael Guillen at 6/11/2007 10:39:00 PM