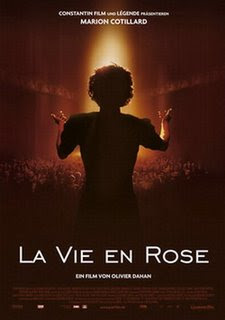 Meeting Olivier Dahan, the director of La Vie En Rose, during the film's festival screening at SFIFF50, was at first offputting because he struck me as a classic poseur. With an angled beret and an eyebrow ring, he seemed the stereotypical Frenchman suffering ennui for his art. Further, in all honesty and forthrightness—though I respected the project of La Vie En Rose and am a great admirer of the musical legacy of Edith Piaf—I had reservations about the film, as I outlined in my previous review. Thus, I welcomed the opportunity to voice my reservations directly to the film's creator. Admittedly, it was effortless to compliment Marion Cotillard's stunning Oscar-worthy portrayal of Edith Piaf. I asked if we could discuss his working relationship with Marion. He confirmed that he had her in mind when he conceived the film and I wanted to know what it was about her that convinced him she could be his Piaf?

A few years before Dahan even began thinking of making a movie about Piaf, he had watched Marion Cotillard in another movie and—though he didn't really like the film—he was nonetheless impressed with her performance. She came first to mind when the journey of making the film began even though they didn't meet until long after the writing process. He consciously refrained from meeting her—because he didn't want to meet anyone—until the final draft was completed. 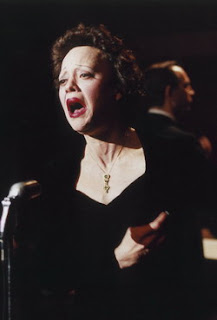 The film depicts three stages of Piaf's life—her early childhood, her late adolescence and then her maturity, as personified by Cotillard. I was curious how Dahan achieved a unified continuity of Piaf's character through the three actresses; if they rehearsed together? But Dahan disclaimed any such unification, professing with a chuckle that there was "total disorder" during the shooting. Sometimes they would shoot a sequence in the morning where Cotillard was in her age makeup only to turn around and wait hours while her makeup was removed so they could shoot a sequence in the afternoon where she was young. Everything was in disorder: both the script and the shooting. There was no interaction between Cotillard and the younger actresses; they never met.

As a trained painter, Dahan claims his approach to filmmaking was painterly, though not in a visual sense as one might understand it; more in a creative sense. I admitted I didn't understand what he meant by that and asked him to clarify. He explained his approach to the film was certainly not pictorial. It couldn't be. For him the camera is much different than brushes on canvas. By a "creative sense" he meant the level of intuition a painter uses when composing a painting. Trying to apply such a level of intuition to making a film proved difficult because—unlike painting—filmmaking is not a solitary activity, many people are involved on set, up to as many as 100-200 people. Trying to get his ideas and his intuitions across to everyone was arduous, made all the more so because he doesn't work with either storyboards or a script on set. While filming, he doesn't even keep a script in his hotel room because he doesn't want reading it to affect the daily filming.

Filmmaking, for Dahan, is similar to performing art in the sense that—if you're doing a play for example—you go out on stage and perform your lines in the one or one and a half hours allotted; there's no stretching a play out for four hours. When he goes on set to shoot a scene, he puts himself in the state of mind that it will be accomplished within a certain amount of performance time. He trusts his intuition to make the best use of that time. 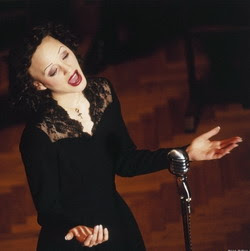 Remaining with the painting analogy, I compared La Vie En Rose to the work of the Impressionists. My favorite scene, rendered in a stylish directorial flourish that could be interpreted as impressionistic and which induced a frisson shiver, was when Edith Piaf—after training with Louis Barrier (Pascal Greggory) for months and having him hone her stylized presentation—is introduced to her first club audience. Instead of having Piaf simply sing her heart out, Dahan elected to score the scene and to focus on the reaction of the audience to her debut performance. Dahan agreed that particular scene could be perceived as impressionistic, as with several other moments and small interstitial sequences throughout the film. When he was writing the script, that particular sequence was the third staging of a Piaf song and rather than bore himself by writing the same kind of scene over and over again with Piaf on stage singing songs, he decided it would be more interesting to find some different angle for the third song. He decided to have her on stage performing but without the literal song.

I asked if it was his intention to structure the narrative of the film through Piaf's eyes recalling her own life in bits and fragments? Is that why her past was accessed so sporadically? He confessed he didn't want to make it too clear. His first idea was to structure the narrative from the point of view of someone who—if not dying—was falling asleep and entering a dream state. In such a state, memories come flooding to the psyche without order and in random association. Piaf says herself in the script, "I've tried to remember some things but other things come instead of what I really want to remember." That's the feeling and the experience he was playing with throughout the film. He was aware that this could be possibly confusing to audiences but confusion was an essential element of Piaf's story.

A slightly different slant on that approach was that the film was seen through "shards shed from the spotty memory of an ailing drug addict", as Dave Hudson pointed out at The Greencine Daily. As a director, these drugged fugue states served Dahan's thematic and creative aims by allowing him the freedom to shift the story away from factual realities. He didn't want to make a biopic in the first place; he wanted to paint a portrait. He might have felt obligated to the facts but the facts were not the reason behind his film. 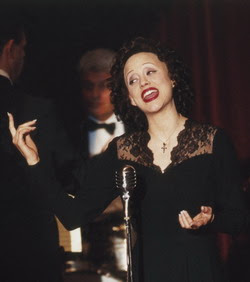 Dahan refuted the anecdote reported in the press notes that—when the idea of doing a film about Piaf first came to him—he text messaged producer Alain Goldman about wanting to do "a blockbuster". Conceding that he did text message Goldman with the idea (because he doesn't like to talk on the phone); he nonetheless insisted that—if he used the word "blockbuster"—it was merely in jest. I explained that—whether he was joking or not—the reason his alleged comment struck me was because a blockbuster implies a certain accommodation of audience expectation and La Vie En Rose seems intent on thwarting those expectations. Watching the film is a challenge. "I hope so," Dahan smiled. Even if he used the term "blockbuster", he didn't mean it in the standard sense. He meant more to imply that he wanted to make a movie as sophisticated and as simple and accessible as a song. For him that was the key point. "For sure" he wanted the audience to have to work a little bit with him—though "work" is perhaps not an accurate term—he wanted his audience to relax into the film and to feel it, not think it.

In terms of the look of the movie, one of the qualities I most enjoyed was Dahan's replication of photos that I had seen on exhibit when I visited Paris in 2003 and La Môme's life was being celebrated in a fantastic installation at the Hotel del Ville. The night she was being interrogated by the police regarding the murder of Louis Leplée (Gérard Depardieu), for example, seemed lifted right out of the news photographs. Dahan informed me that there is actually another movie about Piaf that focuses exclusively on that sequence of events. For him, replicating those scenes was one of the fun parts of production. Sometimes it was fun to adhere to the real evidence of Piaf's life; other times it was fun to drift away a little bit and mix everything together. 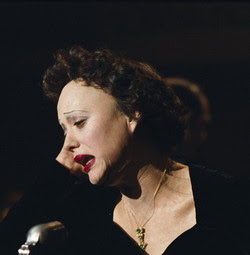 Another aspect of the film that worked for me were the scenes where Piaf selected her own music and how much this inspired her to continue performing despite the physical breakdown of her body. No matter how frail she was, if it was the right song the tenacious spirit of Piaf's creativity impelled her forward. That glimpse of her personality was rewarding. But I was curious why Dahan chose not to show many of her personal relationships? As thrilling as the scene was where Piaf meets Marlene Deitrich, why did he not examine their well-noted friendship further? For the same reasons he gave before, Dahan explained. He wanted to paint a portrait, not make a biopic. His portrait did not require new narrative threads at every juncture. There was also no Yves Montand in the portrait because, for Dahan, Montand didn't reveal anything new about Piaf. Piaf was very important for his creative development but he was not so important to her creative development. Thus, his portrait—which was really a psychological portrait about Piaf's creative development—didn't require Montand or Dietrich any further than the encounter presented. Even though he wrote many more scenes that featured Deitrich, he chose not to include them in the final film because they didn't really reveal anything additional about Piaf. He retained the encounter with Deitrich in the film because it showed how—even though she was already a big star at the time—she deeply admired Deitrich, who was an even bigger star. It was a comment about her state of mind during a certain pinnacle of her success. That was a little more information about her as a person and Dahan thought it was important to reveal that. The scene was important for what it revealed about Piaf, not because of Marlene Deitrich.

La Vie En Rose took nearly three years for Dahan to complete but he's not wanting to rest on laurels. He wants to shoot a new film right away, though this time around he would prefer not to have to write the script. He simply wishes to direct.