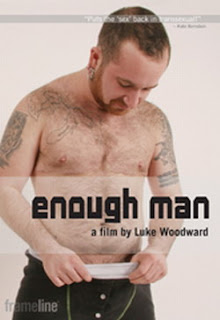 When Frameline's Artistic Director Michael Lumpkin countered transgender scholar and filmmaker Susan Stryker's characterization of Frameline's programming as practicing "liberal accommodationism" rather than truly including transgendered expressions, Lumpkin asserted as a defense Frameline's deep commitment to promoting the work of transgender filmmakers and films about transgender issues. Of further note is that Frameline Distribution distributes over 20 transgender themed films and over one third of its free monthly Frameline at the Center screenings have been transgender themed.

Such was definitely the case when I attended the inauguration of the third season of Frameline at the Center, which screened Luke Woodward's Enough Man. As was announced at the time, Enough Man presented explicit sexuality in a documentary about body image, relationships, sex and sexuality from the perspective of nine female-to-male (FTM) transmen and their partners. Featuring health educators, college students, sex workers, activists and artists, Enough Man navigated the terrain between objectivity and personal identity, allowing me as a viewer into some of the most personal and rarely discussed areas of transgender life. Though by, about and allegedly for FTMs, Enough Man nonetheless engaged me with its sexy, political, punchy and poignant presentation, revealing things I had honestly never seen before.

Director Luke Woodward took the stage after the screening to address the questions of his capacity crowd.

I thanked Woodward for his eye-opening and heart-opening piece. I was curious why in the footage of Raven and Joshua, Raven's wife was not involved in the project? Quite simply, she didn't want to be, though she was briefly seen in one sequence. She's a transwoman involved in local politics who preferred to not be featured in the film. Woodward admitted this was something of a "bummer" because it would have been cool to hear her perspective. 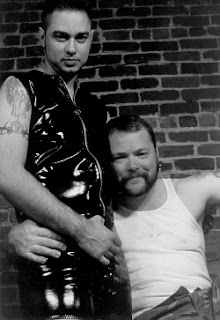 Asked where the interviews were filmed, Woodward said he was living in Rhode Island when he started shooting. Because there weren't many transpeople in Rhode Island, he had to research and interview out of state. Some of the subjects were in western Massachusettes, some in Washington D.C., and a few in Chicago.

Did he get what he was expecting from his interviews? He was just starting his own transition when he began shooting the film. He had never made a movie before so he had unrealistic expectations of how long it would take; he had assumed six months when, in fact, it took two years. Honestly, he didn't really know what he expected. He wanted a documentary that talked about sex but also showed sex. A lot of people thought that was a weird idea but he wanted to try it even if it turned out weird.

Asked how his subjects felt about his footage of them and whether or not he gave them opportunity to watch before he edited, Woodward responded that—after doing the interviews and the sex scenes—he sent unedited copies of the footage to the subject parties. He offered to remove anything they didn't want him to include in the film. Nobody said anything. Everyone who's in it has been happy with the film.

What was it like filming the sex? Intense, Woodward admitted, it pushed his comfort zone. He didn't tell people what to do and some of the sex they wanted to exhibit had not occurred to him to include in his movie, though the range of activity excited him.

Were the things said by his subjects commensurate to his own experience? Again, when he was shooting the film, Woodward was early in his own transition. He hadn't even changed his name, started taking testosterone or undergone chest surgery yet. The film was his excuse to go around and meet people and ask them personal questions so he could gain his own bearings. In a way through the filmmaking process Woodward was learning more about the subject than relating to it at the time. In retrospect he relates more.

After having made such an explicit film, Woodward was asked where he would go from here with his career. With perfect timing he quipped, "My career?" The audience burst into laughter. "I work for a drug treatment program," Woodward answered, "so that's my career more, I guess." Perhaps because his film was so explicit, it might limit some of his future opportunities. He might not be able to be a teacher, for example, or President. Essentially, he offered that when you think something is important, you just want to do it irregardless of how it might hinder or further your "career." 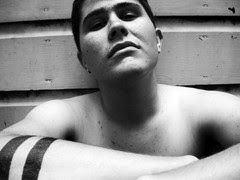 Why his particular choice of subjects? Woodward reiterated that he was fairly isolated in Rhode Island and really didn't have the luxury of handpicking people for the film. He was grateful to film anyone he could find who was willing to talk on camera. Admittedly, the film's focus is predominantly on white people and—if he had a choice—he would have preferred more diversity, not only racially, but he would have liked to have shown more non-transmen and relationships with non-transmen. The film reflects more who was available to him through contacts and the Internet. Woodward conceded as well that the film does disproportionately represent transindividuals into kinky sex. He has no statistics on what the actual numbers would be with regard to whether this is common or not among transindividuals; that's not a research project he has embarked upon. Clearly, the people who wanted to be in a movie like this tend to be kinky exhibitionist types. He hasn't traveled enough with the film to know if this skewered representation will breed negative feedback. If people don't like the film, they tend to leave before he can gauge their reactions; but, he has heard that the film is controversial.

Was he aware of the rise of transrappers in the local music scene? Sure, Woodward responded. Through a search on the Internet he found out about local musicians like Jacob Perez (aka Scarletto), who contributed a few tracks to the film. One of the extras on the dvd, in fact, is one of Scarletto's songs. Lisa Jackson is a transwoman who does a rock diva act and she's featured in the film as well.
Posted by Michael Guillen at 6/12/2007 10:48:00 AM

I've known Luke for many years, but we've fallen out of touch. I found this post when doing a Google search for him. Thanks for posting this... I knew him when he was making the film, but I never did get to see the fruits of his efforts.

Elisa: Thanks for stopping by to comment. I hope you and Luke can get back in touch with each other.

I meet Luke many years a go ..I so happy to know something about he's work and vision thanks Rebecca ..un abrazo Fuerte Ojala nos veamos pronto ..very good luck ...Wanda Kruda

I meet Luke many years a go ..finally I felling happy to know something about him ,and he's work and vision ,very good luck ,Ojala nos veamos pronto ,un saludo Wanda Kruda