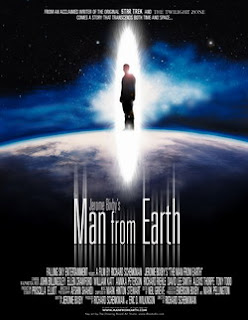 Jerome Bixby's Man From Earth directed by Richard Schenkman quietly restores dignity to science fiction of the mind. Accomplished on a shoestring budget under two weeks time, the film transcends its production limitations to deliver a thought-provoking meditation on immortality. Recently experiencing its "world premiere" at San Francisco's 4th Annual Another Hole in the Head Film Festival, I could only wonder what Schenkman might have achieved with more time and more money? On its own merits, however, the film picks itself up by its bootstraps to seduce audiences into a solid mindbender. For those who believe science fiction requires millions of dollars worth of CGI effects, gut-gobbling monsters or interstellar pyrotechnics, Man From Earth will keenly disappoint. All special effects in this film are firmly grounded in the strength of the imagination. For those who like to flex their brain, Man From Earth is a rewarding workout. The film's theatrical trailer and behind-the-scenes commentary are provided at the film's website.

As synopsized by Wikipedia, Jerome Bixby was a short story writer, editor and scriptwriter, best known for a comparatively small output in science fiction. I first noticed his work with "It's a Good Life" (1953), adapted as a teleplay for Twilight Zone by Rod Serling with Billy Mumy cast as Anthony, the boy who banishes family members to the cornfield if they do not succumb to his demands. As Gary Westfahl has written at his site Biographical Encyclopedia of Science Fiction Film, Anthony "ingeniously torments adults by insisting that they always be happy in a conventional, 1950s sort of way." In other words, Ozzie & Harriet as Hell. "It's a Good Life" has been revisited several times by that franchise, including Twilight Zone—The Movie. 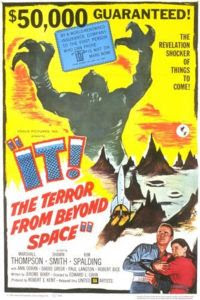 Then there was It! The Terror from Beyond Space (1958), with its rubber-suited Martian stowaway endangering the human race. Bixby also conceived and co-wrote the 1966 film Fantastic Voyage, later novelized by Isaac Asimov.

I'm less familiar with what is probably Bixby's best-known work: the Star Trek—Original Series 1967 episode "Mirror, Mirror", which introduced the series' concept of the Mirror Universe, synopsized at Star Trek.Com and contextualized at Wikipedia. The Star Trek: Deep Space Nine seventh season (1999) Mirror Universe episode "The Emperor's New Cloak" is dedicated to Bixby's memory. "Requiem for Methuselah"—another Star Trek episode written by Bixby—prefigures Man From Earth through the character of Flint who is revealed as an immortal who has wandered the Earth for centuries in various personas, including Brahms and da Vinci.

Yet another link into the Star Trek franchise is the film's location: Vasquez Rocks near Valencia, California, where Captain Kirk battled it out with Gorn in the "Arena" episode. Vasquez Rocks has been used in many movies, including serving as Bedrock in the live-action Flintstones movie.

The bulk of the movie itself, however, is filmed in a single room around a fireplace. To prepare himself for this challenge, Schenkman rewatched Sidney Lumet's 12 Angry Men (1957)—which simulates the deliberations of a jury in a single room—and read Lumet's commentary on the making of that film. It was Lumet's first movie, bankrolled by Henry Fonda, low-budget, and they rehearsed for two weeks and shot for two weeks. The idea was that everyone would be off book so that they could point to whatever corner of the room the camera was filming and whoever had lines at that point could move into that corner of the room to deliver their lines. That's the model Schenkman wanted to follow, though he only had one week to rehearse and one week to shoot, and unfortunately his actors couldn't get off book in time to effect this strategy properly. He had to cut the film up into scenes, which they honed down in a race against time.