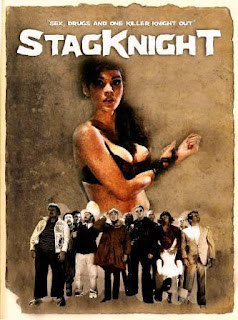 Along with my earlier entry regarding the line-up at the 4th Annual Another Hole in the Head Film Festival ("Holehead"), SF360 has published my top picks.

More than an exercise in the suspension of disbelief, Simon Cathcart's StagKnight—Holehead's opening night feature—is an exercise in the suspension of disregard. Cathcart has been methodically informing Twitch of each and every development with the film along the way so for those who want to follow that trail The Gommorahizer has encapsulated all that pertinent forcefeeding into one handy post. 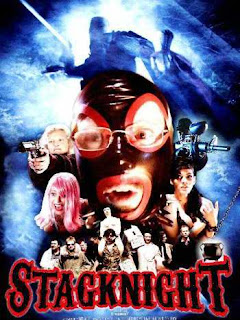 I'm sorry to say I didn't find this film as funny—or even as offensive—as others have or as, undoubtedly, others might. In fact, I found it downright lame and couldn't believe it was put in the opening night slot, though I'll grant it is "uniquely stupid" (and with stupidity being so commonplace these days, that's saying something). The burgeoning queer romance between burly 6'10" William (Martin Bayfield) and simping "Steve the Queen" has its moments though the suggestive indignities Steve has to undergo to get his guy seemed a little under the belt (so to speak). But then sexual preference spares no one in this film, least of all the audience.

There is one funny line: "My momma always told me that if it has tires or testicles, you're going to have trouble." I just wish momma had more to say in this darkly-lit, overly broad comedy-horror piece. But mileage varies of course and for those who come out of the Roxie Film Center pumped on paintball, Movieweb has interviewed director Cathcart.

Though he's shifted away from San Francisco to Atlanta, Jay Blodgett is still keeping his finger in the Bay Area pie. Via screeners, he has reviewed nine (count 'em nine) days worth of the Holehead Festival at Life With Movies and Maxxxxx. Methinks he misses us.
Posted by Michael Guillen at 6/01/2007 03:30:00 PM