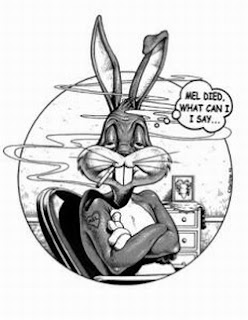 SF360 has picked up my interview with Dennis Nyback whose Bad Bugs Bunny program will be screening twice at the 4th Annual Another Hole in the Head Film Festival. Oddball Film+Video is co-presenting those screenings, as well as offering Bay Area cinephiles two further opportunities to experience Nyback's curatorial prowess.

On Saturday, June 9th at 8:00PM, Oddball presents F@ck Mickey Mouse, Dennis Nyback's film program exploring how the Hollywood studios reacted to the Disney animation juggernaut in the 1930's and 1940's. Watch rare cartoon precursors beat him to the punch, imitators rip him off and parodies make vicious fun of some of Disney's greatest animated shorts. Plus! "Der Fuehrer's Face", Disney's own Academy Award winner suppressed for over 50 years! 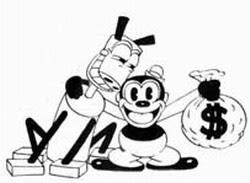 As Nyback writes: "In 1994 I became intrigued with various cartoons I owned that had strong connections with cartoons made by the Disney company, yet were made by other animators. These cartoons could be divided into three groups: Blatant imitations of Mickey Mouse; non-Disney precursors to later Disney versions of the same story; and exuberantly vicious parodies. I thought there was a great program on this theme. I called it Compare To Disney (with the "TM" trademark symbol after Disney). This program was reviewed positively by the press, but attracted very small crowds. In 1996 I decided to try it again, but this time I called the show F@ck Mickey Mouse. It premiered under that title at the Cinema Village in New York in January of 1997, and attracted good crowds. I then took it to the West Coast that year and showed it in San Francisco, Portland and Seattle. In 1998, I took it to Europe. During that tour I did one double feature of F@ck Mickey and Bad Bugs Bunny in Gothenburg Sweden which attracted 800 customers, the single largest crowd on the tour."

Following F@ck Mickey Oddball Films presents a second Nyback program at 10:00PM, Ooh La La: A History of Lingerie, a film program exploring the history of lingerie in cinema, from 1915 through the 1960s. Watch vintage 16mm films including Why Girls Walk Home, How to Undress in Front of your Husband and What The Blushing Bride Wore. In these films men are men, and women can look for fashion tips. 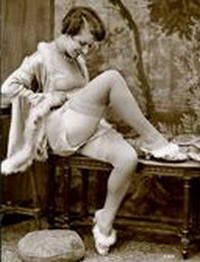 Other shorts include "Soundies," early skit-driven "music videos" that played in bars utilizing a nickel-fed machine film jukebox called a Mills Pan-o-ram. In What the Blushing Bride Wore, a singing, peeping-tom quartet grows progressively more befuddled as the dancing bride strips off layer after layer of her trousseau. Another campy Soundie The Man Who Comes Around is sung by a lollipop-licking boy whose mommy gets some awfully familiar visitors after daddy goes to work. There's the over-the-top 1930s dance number Dames, which peaks in an actual kaleidoscope of dancing girls and a anti-instructional bit How to Undress in Front of Your Husband, starring Mrs. John Barrymore(!) wife of the famed Hollywood legend. At the other end of the spectrum is Dixie Evans' knock-out 1950s era strip tease How to Get to Hollywood, surely one of the most energetic strip shorts of all time.

I have to wonder about that story regarding "Der Fuhrer's Face". I recall seeing it, or perhaps a good portion of it on television, on Disney's Sunday night show. I remember that my father, a refuge from Nazi Germany, thought it was funny.

I'll ask Nyback if what he's actually saying is that the entire piece has not been seen for 50 years and, if so, try to determine what was possibly not in the version you saw.

Nyback wasn't aware of any such televised broadcast. Do you recall whenabouts you remember seeing it? Nyback's fairly confident the film didn't resurface until the '90s when it made its way from the vaults to dvd.

There is also this from Wikipedia: "Due to the propagandistic nature of the short, and the depiction of Donald Duck as a Nazi, Disney has kept it out of general circulation since its original release. [Italics mine.] Der Fuehrer's Face finally received an official U.S. video release in 2004, when it was included in the Walt Disney Treasures limited edition DVD set Walt Disney: On the Front Lines. It also appeared in another Walt Disney Treasures set; The Chronological Donald Volume Two (released in December 2005).

...but then there's this, from Jerry Edwards at the Disney Shorts site: "An incomplete black and white version was shown on the 11/13/60 Disney anthology TV show "Donald's Silver Anniversary."

I can't provide more detail except that what I saw was on television in the early Sixties. We had a black and white TV, so I have no idea what version was broadcast. Disney did have a habit of recycling movies and cartoons on his television shows.