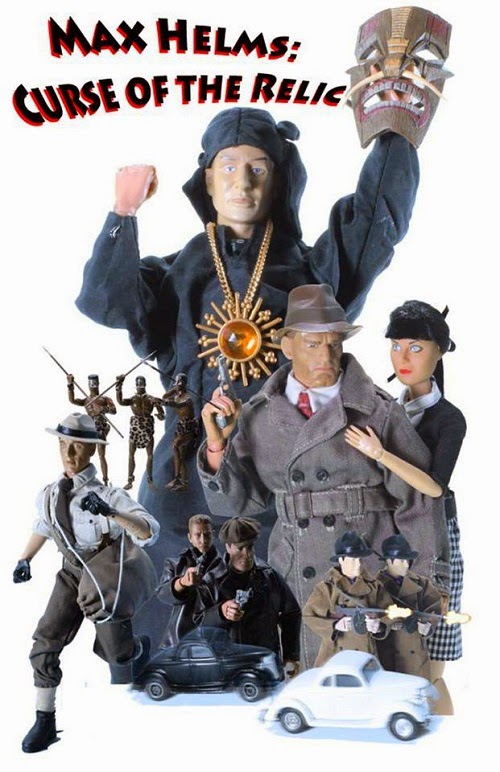 Hutt Wigley catapuled into visibility with his collaboration on last year's "Skyship Tour" ramp-up videos to Treefort 2014 (parts one, two and three) produced by Retroscope Media. He follows up this year with his contribution to Treefort Film Festival's "Local Gems" showcase: Max Helms: Curse of the Relic (2015), screening at 12:40PM on Saturday, March 28, 2015, at The Flicks.

An homage to the crime films and film noirs of the '40s and '50s, Hutt Wigley's B&W stop-action animated short is hands on, frame-by-frame, a tour-de-force of set design, costuming and period detail. It recently won Best Animated Feature at The Joelanta and Great Atlanta Toy Convention Film Festival.

As synopsized at IMDb: "Set in San Francisco, 1938, the exhumed corpses of deceased street-level criminals are being discovered all over the city ... weeks after they've died! But who's digging up dead criminals? And why? Max Helms is a rough and tumble private-eye with his thumb on the pulse of San Francisco's low-rent criminals. Polly Bixby is Max's sassy-but-resourceful secretary. When a mugger unwittingly drops a stolen African relic right in Max and Polly's laps, they discover an underworld of occultists lead by German mobster Gustov Heinrich. Max and Polly uncover Heinrich's devious plot to take over San Francisco using an undead criminal army, but can they stop his evil plans in time?"

I'm grateful to Hutt for taking the time to sit down to talk to The Evening Class about his latest effort. 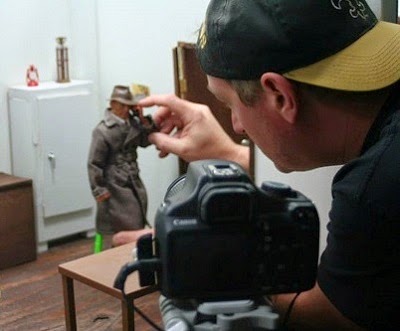 Michael Guillén: Hutt, could you give me some back story on how you approached the field of stop-action animation? What's been your training and schooling?

Hutt Wigley: I was into stop-action animation when I was younger, about eight or nine years old. My parents had a Super 8 movie camera and I tried it then by just hitting the shutter button; but, film processing was pretty expensive for an eight-year-old so I gave up on it because my efforts at the time weren't worth the expense.

Guillén: Were you inspired by something you had seen? Or did it come about by your playing around with your parents' camera?

Wigley: I learned to do it as a kid by watching a documentary on Ray Harryhausen. I also liked the Rankin / Bass stop-motion holiday specials, The Year Without A Santa Claus (1974), that kind of stuff. When I learned how it was done by watching the documentary on Ray Harryhausen, I wanted to try it. It didn't go so well at first—when you're eight or nine years old, you have the attention of a goldfish—so I gave up.

But the seed was there. I knew how to do it. I just never got to practice because practicing was too expensive. Fast forward: I was probably in my late thirties and taking college courses through Westwood online and one of the classes I took was Intro to Animation. There was a chapter in our text book about stop motion. I'd been collecting action figures—mainly G.I. Joes—since I was a kid, so that was a big catalyst. I read that chapter in the text book and it said that I would need a digital camera and Windows Moviemaker. 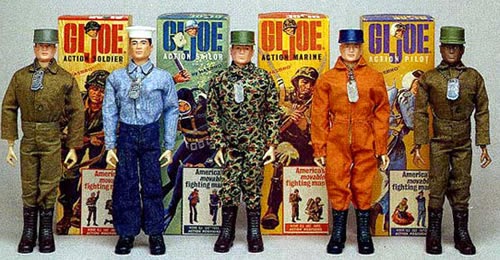 Guillén: About how many G.I. Joe action figures have you collected?

Wigley: At one point I had about 300. But I'm not so much a collector anymore. I mainly use my collection for stop motion now.

Guillén: What intrigues me—I noticed it last year in the Skyship Tour videos and even moreso in your Max Helms piece—is how individual the faces are on these action figures. I had a couple of G.I. Joes, but they both looked alike. So I'm interested in how you find the differentiation in character so that you can use them in your stop-action films? Do you make them?

Wigley: I wish I could make them. If I were a sculptor and could do that, I would. There are a lot of different manufacturers of that kind of action figure who provide a lot of differentiation in faces and head sculpts. I find one and I think, "Oh! He'd be a good character in a movie."

Guillén: So you're, in effect, casting action figures?

Wigley: Yeah. I pretty much use the same G.I. Joe body but I swap out the heads to make different characters.

Guillén: So before the Skyship Tour ship project with Retroscope Media for Treefort, had you made other stop action films?

Wigley: I did a couple of music videos. I did a short film for a writer named Anthony Ilacqua. He wrote a script called Resort to Ice (2011). I wasn't familiar with all the video editing software so that project didn't turn out as well as I would have liked; but, for me, the animation is pretty good for early work. I'm proud of it.

Guillén: All necessary groundwork leading up to your current project Max Helms: Curse of the Relic, which is visually engaging. I was impressed with your black and white mise en scène, and your period detail (the cars, the costumes, the sets). Can you speak to how Max Helms developed and why you wanted to go in this direction with your craft?

Wigley: Well, talking about the different head sculpts, I had the head sculpt from that G.I. Joe character and I dressed him up as this film noir detective. Then I thought, "Man, I have to make a story around this guy." My problem is writing scripts for animation because I tend to write them around what I have; but, I have a friend Greg Bray who's a writer—he writes children's books—and I'd been talking to him about it. He said, "Well, let me write a script for you." I wanted somebody else to write it because I wanted to get outside of my own limitations.

Guillén: In terms of genre, Max Helms struck me more as a crime film from the 1940s than a true film noir, which for me requires the classic femme fatale. In your cache of action figures, do you have female characters?

Wigley: Well, I have the character of Polly Bixby, Max's sassy-but-resourceful secretary, voiced by Kelli Stone. In Max Helms, we didn't really get outside that whole damsel-in-distress storyline. Greg is actually working on a sequel to Max Helms and I think he has a femme fatale in that, so....

Wigley: This weekend there is an action figure convention in Atlanta, Georgia, the Joelanta and Great Atlanta Toy Convention Film Festival, which has a film festival component and Max Helms is screening there.

Guillén: That's intriguing. There's a community of action figure aficionados? Are you a member of that community? 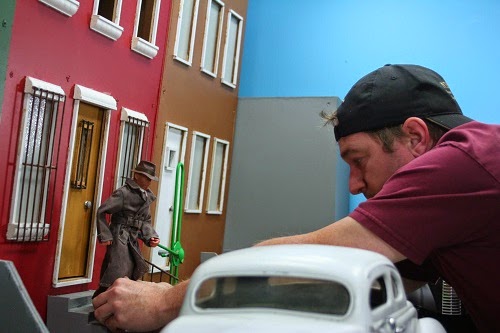 Guillén: I was likewise intrigued by the sound design for your film, which has an understated low-key delivery that I feel is true to grade B 1940s crime films.

Wigley: That's what I was going for. A lot of people don't get that.

Guillén: Talk to me about your set design. Max Helms is full of little details, down to the charmingly oversized coffee cups. Do you make all your props? Do you find them? Do you use dollhouse props?

Wigley: A lot of times, yes, I do. There's the Barbie-scaled stuff that I can use since it conforms to the scale that I'm working with. I use a lot of that. A lot of hobbyists make things like that and sell them on Ebay.

Guillén: Do you make your own costumes?

Guillén: Who makes your costumes?

Wigley: A lot of times I can find things that work for what I want.

Guillén: You found all those suits and fedoras already made?!!

Guillén: Impressive. So, though you're not the tailor, you are the dresser and find the costumes you need?

Wigley: Suits are made on that scale. 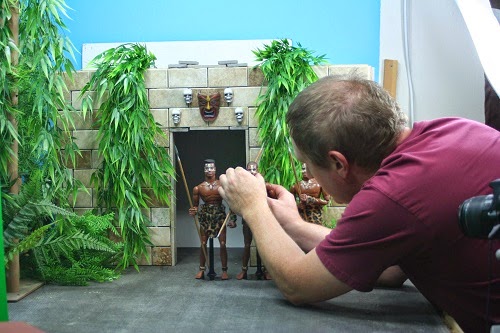 Guillén: I didn't realize that. So, along with the costumes, the phones, the desks, all of that you find?

Wigley: I actually have a friend who I call my toy wrangler. I email him and I'll say, "Hey, I need one of these." He'll find someone who's selling it on Ebay and buy it for me. All the sets and much of the furniture I do make myself.

Guillén: Where did the character of Max Helms come from? Who is he patterned on? Who is Max Helms?

Wigley: I didn't really think of a back story for the guy. I was kind of thinking he was a WWI vet, an older grizzled guy.

Guillén: How long did it take to create Max Helms: Curse of the Relic?

Guillén: Oh my God! This is why I like being a film journalist. I get interested in a project and within a week I've written what I have to say and I move on. After Joelanta, will you be submitting elsewhere?

Wigley: I've been submitting to other festivals but haven't had any takers.

Guillén: But Treefort had the good sense to include you in their "Local Gems" showcase! How's that feel for you?

Guillén: So what's your dream? Where do you want your stop-action work to go?

Wigley: It would be cool to find a job where I could tell Max Helms's story. A TV series?

Guillén: I look forward to that. I found your first installment thoroughly enjoyable.
Posted by Michael Guillen at 3/22/2015 08:18:00 PM