A RARE NOIR IS GOOD TO FIND—"Japon Negro" Triple-Bill 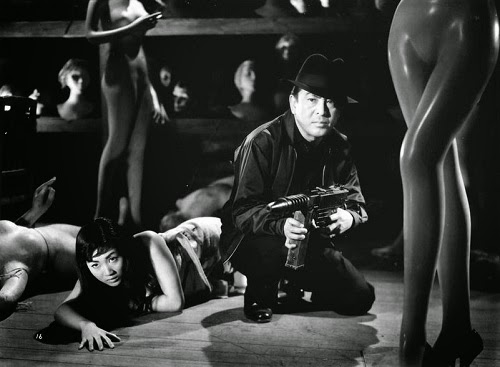 In his program notes for the upcoming Roxie Theatre international noir series "A Rare Noir Is Good To Find", Donald Malcolm characterizes "Japon Negro" as "the collision of existential suffering and the 'code of revenge' so prevalent in the Japanese version of noir." This collision has become a cinephilic favorite in recent years, partly fueled by an international touring series celebrating the centenary of Nikkatsu Studios ("Life Is Short") that screened Bayside at Berkeley's Pacific Film Archive in October 2012, and the Criterion Collection's concerted focus on the Japanese New Wave through individual releases of key titles (i.e., Pale Flower) and box sets such as "Nikkatsu Noir" and "The Warped World of Koreyoshi Kurahara" (via their Eclipse editions).

As Criterion contextualizes in their synopsis for the Nikkatsu Noir box set: "From the late 1950s through the sixties, wild, idiosyncratic crime movies were the brutal and boisterous business of Nikkatsu, the oldest film studio in Japan. In an effort to attract youthful audiences growing increasingly accustomed to American and French big-screen imports, Nikkatsu began producing action potboilers (mukokuseki akushun, or 'borderless action') that incorporated elements of the western, comedy, gangster, and teen-rebel genres."

Aside from Criterion's slate of films by Seijun Suzuki, "A Rare Noir Is Good to Find" includes his rarely seen Ankokugai no bijo (Underworld Beauty, 1958), which—as Malcolm encapsulates—"is primarily a yakuza revenge film centered around the shifting location of stolen diamonds. Director Seijun Suzuki, who would soon graduate to singularly baroque, cartoon-like, high-contrast color extravaganzas, shows that he can play it (relatively) straight, capturing the grit of Tokyo locations while leaving room for interior scenes that implode into violence directly from the inner agony of its characters."

Underworld Beauty depicts Tokyo at night, shiny with rain, and lustrously photographed by the seemingly one-shot wonder Wataro Nakao. Underworld Beauty is Nakao's single IMDb credit, which makes me curious what became of the career of this competent cinematographer? And though his seventh film, Suzuki's Underworld Beauty was his first filmed in widescreen by Nakao. Several critics have bemoaned that this earlier work of Suzuki's doesn't compare with the extravagant stylisms of his later work, and find Underworld Beauty to be restrained and staid by comparison; but, on its own merits, Suzuki and Nakao incorporate Karl Freund's trademark expressionist lighting design and—as noted by Rex Baylon at Film Expression—"the play of shadow and light helps elevate visually unexciting scenes into wonderfully enthralling tableaus." Adding another significant layer to the production is Naozumi Yamamoto's theramin-tinged, carnivalesque score, reminiscent of Nino Rota in its levity, set at-odds against the film's dark events.

There are several detailed plot synopses of Underworld Beauty online—Michael den Boer's at 10K Bullets, Jeff Duncanson at Filmscreed, "Todd" at Teleport City, Marc Saint-Cyr at JFilmPow-Wow—but particularly impressive for providing cultural and historical context is, again, Rex Baylon's write-up at Film Expression, which likewise articulates Suzuki's "unique brand of postmodern surrealism" that "challenged Japanese notions of proper behavior, sexuality, and gender roles" by attacking "the very core of Western storytelling techniques." Many of Suzuki's best films, Baylon writes, "forego the safety net of a classic three-act story structure preferring instead to build his pictures out of flamboyant set pieces, idiosyncratic characters, and a loose improvisatory shooting style that often frustrated viewers who were weaned on predictable Hollywood fare. Like his American counterparts, Frank Tashlin and Samuel Fuller, Suzuki never lost his anarchic spirit even if that meant alienating his audience."

Baylon also recognizes that—after being released from three years in prison—what is driving the film's gangster protagonist Miyamoto (Michitaro Mizushima) is giri; i.e., a sense of social obligation or duty. Freed from incarceration, Miyamoto recovers three priceless diamonds he has stashed away in the sewers of Tokyo. They sparkle dangerously in that grimy, damp environment. He wants to cash them in to help out his friend Mihara (Tôru Abe) who—convinced to help Miyamoto with the jewelry heist—ended up crippled as a consequence, reduced to operating an oden food cart on the street. In a brilliant, chilling stroke of foreshadowing, Mihara chops an oden dumpling in half and offers it to Miyamoto.

The film's mise en scène incorporates an invasive and ubiquitous American presence, as connoted by movie posters, playbills and wall calendars (David Niven is recognized in one and a naked Marilyn Monroe in another). Baylon defines Miyamoto's character against this setting: "Whereas his old gang flaunt pricey suits and an array of high-powered submachine guns and pistols, Miyamoto looks like he just stepped out of a Warner Bros. gangster picture. His outfit echoes James Cagney's costume in White Heat, his fedora links him to the detectives of the private eye genre, and his gait echoes the confident stride of Humphrey Bogart. By linking Miyamoto to the idealized tough guy archetypes of Cagney and Bogart, Suzuki makes it plainly obvious to the viewer that Miyamoto is a walking anachronism. In 1950's era Japan when the economic miracle was still several years away and the streets were clogged with US service men, a constant reminder to the Japanese populace of their humiliating defeat during the war, the concepts of giri and ninjo were looked upon as unrealistic virtues to follow. By making the character of Miyamoto a synthesis of Western genre tropes and Eastern virtues the actor Michitaro Mizushima and director Seijun Suzuki create a distinctly Japanese character that was created out of the social and psychological tensions brewing in Japan at that time." 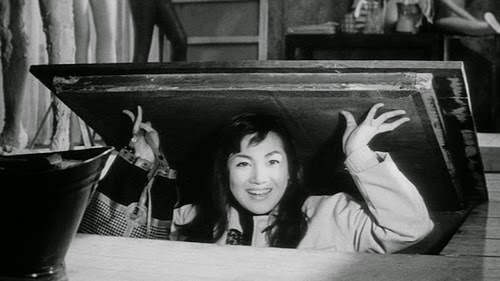 American traces are seen as well in the character of Mihara's younger sister Akiko (Mari Shiraki) whose "considerable feminine charms"—as Malcolm puts it—are what Underworld Beauty trades on. Is she, in fact, the underworld beauty of the film's title? "Instead of wearing a traditional Japanese kimono or yukata," Baylon writes, "Akiko is dressed in tight black capri pants, matching long sleeve turtleneck, a white smock-frock jacket, and ballerina shoes. She is the epitome of modern fashion and, in fact, minus a black beret she is decked out in full beatnik regalia. Just as Miyamoto's costume identifies him with the 30's tough guy archetype, Akiko's modish fashion statement links her with the juvenile delinquency films that were popular in America, Europe, and Japan during the 1950's." Akiko's feisty and juvenile petulance is, without question, the film's central attraction.

Malcolm asks if Koreyoshi Kurahara's Aru kyohaku (Intimidation, 1960) will make noir aficionados forget Rififi (1955)? "Of course not," he answers himself, "but its hair-raising robbery sequence just might give the viewer an unprecedented jolt. A 'chamber noir' where class, greed and blackmail are juggled like chainsaws, Intimidation eschews epic handwringing about 'sympathetic criminals' and dissects class society with a knife so sharp that the entry wound remains undetectable even as the blood begins to flow. Director Koreyoshi Kurahara, like Seijun Suzuki an alumnus of Nikkatsu Studios, gives us Japan's perfect answer to American B-noir."

Intimidation has received the Criterion treatment so I won't dwell much more than on Chuck Stephens's comments on the film, included in his essay for the Kurahara box set: "The year 1960 transformed the scope and tenor of Kurahara's career forever, bringing both the tightly wound suspense yarn Intimidation—a summation of everything he had learned about seamless studio craftsmanship up till then—and the legacy-assuring howl of The Warped Ones. While aesthetically disparate in almost every way, Intimidation and The Warped Ones in fact share one of Kurahara's keenest interests: Japan's class-relation cages and the hypocrisies of the upwardly mobile. This focus is quickly found in Intimidation's fate-bound fable of Takita (familiar Nikkatsu face Nobuo Kaneko), an assertive and rising banker in a regional branch who's about to be promoted to the main office, and his mild-mannered underling and boyhood friend Nakaike (the cadaverous [Kô] Nishimura, a key player in Kurosawa's 1960 The Bad Sleep Well), whose face he has been stepping on all along to get there. Shakespearean by way of Alfred Hitchcock Presents ('I've been waiting for you, Lord Muck . . . always thinking, plotting how to beat you'), Intimidation's simple twists of fate may raise a few goose bumps (especially during the film's chilling final gaze offscreen), but it's in the fever-dream dress rehearsal for, and quasi-Melvillean, hypermethodical silent enactment of, the central heist that Kurahara's screw-tightening genius truly shines, ratcheting up his material into a symbolic realm where everything and everyone has an evil twin lurking in its shadow and a 'blooming' alarm clock doubles for a suppurating wound or a mesmerist's hypnotic, spiraling charm. Even the film's title is double-edged, for this is a world where extortion is but one sort of intimidation—and as intimidations go, a pale pretender to Japan's deeply entrenched systems of class-based promotions and restrictive social advancement, the after-effects of which can be seen written (in Nishimura's career-best performance) across Nakaike's at first jellylike but eventually solid-granite face as he crushes, and then re-crushes, the puny dreams of success of his ostensible better." 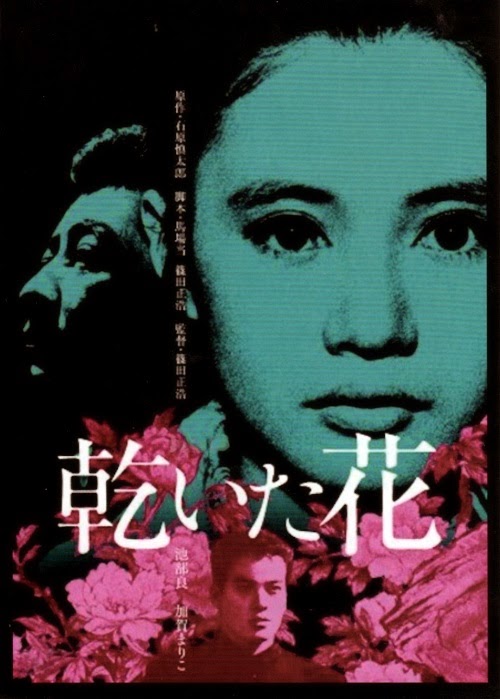 Rounding out this matinee triple-bill is Masahiro Shinoda's Kawaita hana (Pale Flower, 1964) with its pervasive and perfectly perverse "over-the-edge tone and barely suppressed sexual hysteria" (Malcolm). He adds: "Thanks to the icy chemistry between Ryô Ikebe (as the yakuza hitman released from prison just as a criminal turf war is heating up) and Mariko Kaga (as the slumming 'pale flower' with a meta-addictive attraction to thrill-seeking), the viewer is transported headlong into a Tokyo underworld reeking of Baudelairean fleurs du mal. No other noir on any continent uses two aging crime boss rivals for caustic, comic commentary, while all the while those they command are edging ever closer to death by either gunplay or lethal ingestion."

Quite a lot has been written about Pale Flower, considered one of the best—if not the best—representative of the Japanese New Wave. Once again I turn to Criterion whose DVD release of the title includes Chuck Stephens's essay "Pale Flower: Loser Takes All" and an aggregate of critical response. See also, Roger Ebert's review, Freda Frieberg's essay for Senses of Cinema, and Peter Yacavone's abstract for his paper "Shinoda's Pale Flower as a Japanese film noir", which basically lays out that the film is "poised between the conventional 'genre' cinema of the Japanese studios and two prominent strains of international narrative cinema: the European art film and the American film noir." 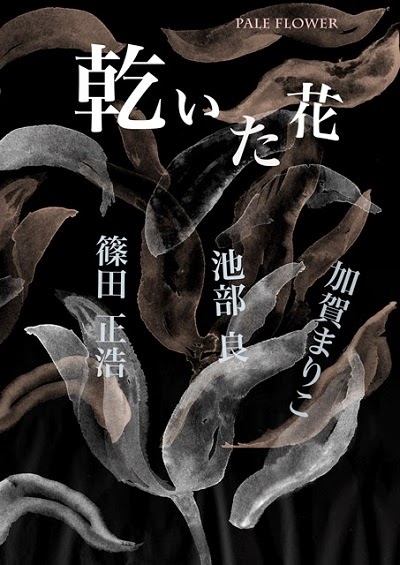 By "European art film", Yacavone is specifically referencing Michelangelo Antonioni, whose "cinema of possibilities" redefined traditional concepts of narrative cinema, replacing action with contemplation, and favoring image and design over character and story. In his review, Roger Ebert compares the way Shinoda's "characters move with the grace of Antonioni's at about the same time" and Yacavone observes: "While Kawaita hana notably exhibits the influence of Antonioni's art cinema in terms of framing and composition, its montage and lighting strategies do not follow Antonioni's example of causally open‐ended long takes and largely naturalistic lighting, instead favoring rigorously controlled and causally determinate montage, and the brash, moody, expressionistic lighting of film noir. Significant events in the film (a nightmare, a killing, etc.) derive directly from the look and topology of American noir, and, in fact, take the noir aesthetic to new extremes in the area of visually abstract and expressionistic stylization and in the representation of complex and pathological psychologies."