Have you ever wondered what happened to Blanche DuBois after she accepted the kindness of strangers and allowed that mild-mannered doctor to lead her off to the looney bin? Comparatively, have you ever wondered what happened to Christianity and how it, too, was led off on an unassuming arm to be made a mockery of on the political pulpit? Some polls indicate that, increasingly, young people no longer hold stock in the Christian faith and its promise of a heavenly afterlife as they watch tele-evangelists and right wing nut jobs whitewash hate and call it scripture, shaking their fist vehemently (if dangerously) at the separation of church and state, as if equally intent at ending the separation between life and death. The afterlife is a consummation devoutly to be wished just to be done with these mediated hypocrites, if one even thinks about the afterlife anymore. Does anyone think about the afterlife anymore? Hell seems hardly a deterrent if Heaven is going to be filled with these assholes: that's what the Christian message has been reduced to.

Mike Black's Blanche DuBois in Purgatory (2014) is self-identified as a comedy somewhere between life and death and comes across as something of a morality play for a frustrated 21st century that questions our presumption of the afterlife and our cultural (and personal) expectations of what comes after. Inversely, it even questions the afterlife's presumption on us as individuals, like the questionable necessity of a doctor's receptionist requiring we fill out forms while waiting for an appointment. Instead, we're given a waylay station, a kind of hovering bardo state, to ask a single question before vanishing altogether. Amerindian shamans might call it a dance before death. Existentialists might call it a moment of defiant reckoning in an amoral universe. But Mike Black sees it as the welcome opportunity to conjure up the language of Tennessee Williams on a bare stage with stark lighting giving three consummate actors the chance to hit their marks and soliloquize against the dark advance of oblivion.

And make no bones about it: Blanche DuBois in Purgatory is all about language, which some believe is the best thing mankind's got, like plumage to the bird, or a shiny pelt to an animal. Mike Black's burnished script is not for short-attention spans. It's a literary, stagestruck chamber piece that elicits action within the wry, mellifluous momentum of its own dialogue. Stage direction is near non-existent. In other words, it's difficult, but rewarding if you allow it to be. It's a maverick piece of parenthetical irony completely out of step with our contemporary moment and, thus, will probably be unappreciated, disregarded, dismissed as nostalgic, and set aside for something either more sexy or explosive, which is a shame because it has more going for it in 56 minutes than most showrunners can conjure for a whole season. If you care to listen. 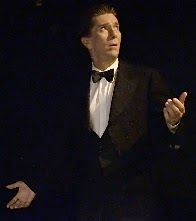 Fans of Matthew Martin who are accustomed to watching him perform impersonations of Bette Davis or Susan Hayward in drag are going to be surprised to see him playing it straight, so to speak, though in tap shoes and tails, perplexed and resistant to the situation in which he finds himself. Martin has ineluctable presence and one only wishes he had more opportunity to flex his chops as he's able to evidence in this vehicle. 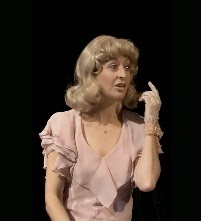 Nancy French, likewise, elicits a restrained characterization of Blanche DuBois that's affecting and tender for being more sweet and mannered than exaggerated. As a dead woman she still favors flattery and recognizes how important a dalliance can be to negotiate extinction. 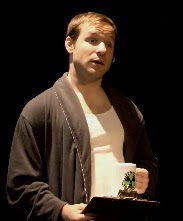 Seton Brown spars with them both as the put-upon and unkempt functionary who facilitates their moment before they're extinguished once and for all, quintessentially overworked and no doubt unfairly compensated, and at irritated odds with the signature themes that announce new arrivals.

This staged cinematic experiment has all the brief pleasure of an absorbing short story and is much like what you would picture in your own mind while reading; a kind of readers theater of the mind, but captured on film by Carole Summers and Lisa Andreini. And it's available at no cost in its entirety on YouTube (though donations are gladly accepted at the film's production site to offset costs). Take a calm moment, fix a cup of hot tea, and pleasure in the well-turned phrases of this dark comedy somewhere between life and death. What will your final question be?

Thank you for your extraordinarily thoughtful attention to our experiment, Michael. As so often, you see, and at many levels, what escapes the parochial view of more complacent, less daring seekers of this thing called art. --Mike