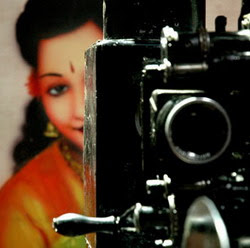 "Look at that mountain; once it was fire."—Paul Cezanne. 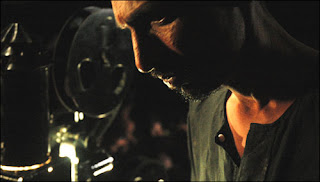 As Frako Loden synopsized in her Evening Class preview of Bioscope, winner of this year's NETPAC jury award for best Asian film at Osian's Cinefan Asian and Arab Film Festival: "[T]his parable set in 1920s Kerala explores the hypnotic effect of the recorded moving image: while evoking a distant (un)holy memory, it pronounces a curse and steals the soul. A poor Indian inherits a Bioscope crank-operated movie projector from a Frenchman which he takes around to villages showing Western films and the earliest Hindi 'mythologicals' (such as the 1918 Birth of Lord Krishna). His wife lies mysteriously ill, harassed by the recurring image of a white man shipwrecked on a beach. Meanwhile those bewildered villagers not entranced by scenes from Lumière, Caligari and Griffith begin grumbling about the evil box trapping the ghosts of dead white men. Bioscope's dreamlike images removed from their context and sound design themselves call forth memories of such visionary works as Aguirre, Wrath of God and Colossal Youth, which also sleepwalk us through troubled dreams and memories of colonialism." 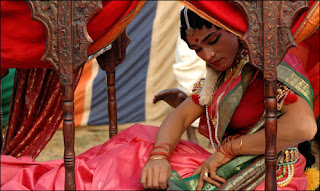 Kay Armatage characterizes this category of films: "These films often tend to set their bucolic cinematic fantasies against a backdrop of the bad and yet somehow nostalgic old days of rural isolation, economic deprivation and political penury. Yet lurking beneath the romantic travelling projectionists that inhabit them is another history of multiple contradictions that come along with these open-air screenings, a history of economic expansion and governmentality." (Film International, 2008, 6:4, p. 41.) As she further observes, "Nostalgia for the arrival of cinema in the rural hinterland is a frequent note in films which … reflect the lost past of cinematic virginity; the spectacle of electrification literally illuminates them, as travelling projectionists carried their generators with them to outback areas." (Ibid.) 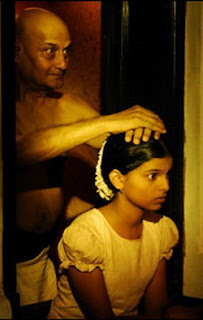 Of gendered distinction to Andrej Fidyk's Battu's Bioscope, whose narrative likewise tracks the introduction of cinema to rural Indian populations—wherein scenes of Bollywood films show men savagely brutalizing women, inducing terror on the faces of the rural women in the audience—the audiences in K. M. Madhusudanan's Bioscope are notably male, though equally horrified at the questions raised by "the spectacle of electrification." Met with equal parts fascination and fear, the flickering images of Lumière shorts and German expressionism, as well as Dadasaheb Phalke's Shri Krishna Janma (Birth of Lord Krishna, 1918) depict—as Lucy Laird writes in her festival program capsule—"a more innocent world, a more innocent vision, beset by superstition, but on the verge of modernity." The glimpse of Krishna defeating the Nāga Kaliya in Phalke's silent film is especially enticing. As one of the villagers murmurs in as befitting a definition of cinema as any: "All this is an illusion. But the story is true." Phalke is considered the Father of Indian cinema and Bioscope provides my first exposure to his work; a revelation indeed. This revelatory cinematic historicity is precisely Bioscope's most sterling contribution. 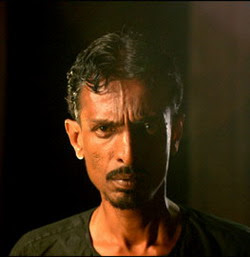 Jai Arjun Singh ("Jabberwock") eloquently writes at the remarkably informative site Ultrabrown (I've long been looking for a site on Indian cinema and this one satisfies fully): "Bioscope is a languorously paced film with a lot of recurring imagery, notably a beautifully shot slow-motion scene—taken from a woman's feverish nightmares—that shows the bloated corpse of a white man being washed up on a shore and carried away by three fishermen. There's something appropriate about the slow pace, because what we're seeing here is an elegiac tribute to a world that is on the verge of being altered forever—we can see that modernity is about to impinge on this setting, that permanent change is on the horizon, and the film seems simultaneously excited and saddened by the prospect, looking ahead to the future but also reluctant to leave the present behind."

As Anuj Vaidya, Associate Festival Director for 3rd i, has intimated, many of the original silent films from India are in "a tattered condition" lacking the funds for necessary restoration. The National Film Archive of India—whose stated mission is "to safeguard the heritage of Indian Cinema for posterity"—wasn't even initiated until 1964, by which time they had already lost over 50% of India's silent cinema heritage. The Evening Class anticipates a seminar 3rd i will be conducting in the spring on the history of Indian Silent Cinema.

Email ThisBlogThis!Share to TwitterShare to FacebookShare to Pinterest
Labels: 3rd i

Thanks for the mention, Maya. Incidentally my own site, Jabberwock, is here. There's a list of posts about films (and books, and other things) on the sidebar.
best,
Jai

Jai, I'm delighted to discover your work. My friend Girish Shambu and I have long sought out good writing on Indian cinema and I feel I have struck the motherlode with yours. Thanks for stopping by to comment. I look forward to perusing your archives.