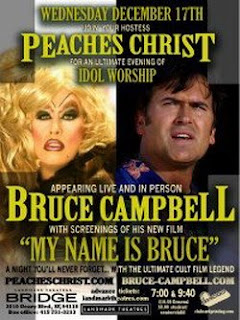 Hostess Peaches Christ is thrilled to announce that a great, big, B-movie dream of hers is about to come true! One night only on Wednesday, December 17th, at Landmark's Bridge Theatre, Peaches will present—not just once, but twice at 7:00PM and 9:40PM—a Midnight Mass produced stage-show featuring cult film icon and genre superstar Bruce Cambell live and in-person. Peaches has been dying to honor Bruce Campbell—as she says "forEVER"—and is putting together this San Franciscan evening of Idol Worship, preceding the Bay Area premiere of Bruce Campbell's directorial debut My Name Is Bruce. Tickets are $10.50 and can be purchased here. 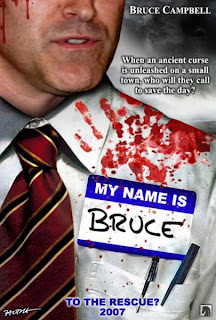 Synopsis for My Name Is Bruce: When the small mining town of Gold Lick, Oregon needs to rid itself of a vengeful monster, they kidnap actor Bruce Campbell—star of the Evil Dead trilogy, Bubba Ho-tep and countless B-movie horror films—and recruit him to be their local savior. Mortified at first, Bruce eventually goes along with the plan, convinced that it's all an elaborate birthday present from his agent (Ted Raimi). But the scheme goes horribly wrong when their hero, known more for fighting directors than mythical warriors, haphazardly leads the town in battle against the beast. Confronted by a monster that's not a guy in a rubber suit, and with the blood of innocents on his hands, Bruce has to choose between the harsh reality of Gold Lick and the sanctity of his former, artificial life. A horror comedy written by Mark Verheiden (Smallville, Battlestar Galactica), My Name Is Bruce co-stars Grace Thorsen and Taylor Sharpe.

This is a match made in heaven … well, maybe hell (as in hella fun)! See you there!