I'm looking at the schedule for the 6th annual 3rd i (as in "eye") San Francisco International South Asian Film Festival, starting this Thursday November 13. The festival kicks off Thursday evening at the Brava Theater, continuing there Friday evening, and moves to the Castro for longer programs over the weekend. I'm reviewing nine and a half of the fifteen offerings to see what I would choose if I had only one full consecutive day and night to devote to it. Don't get me wrong—I personally think it's worth following around all weekend, but most people have non-festival lives to lead and errands to run. 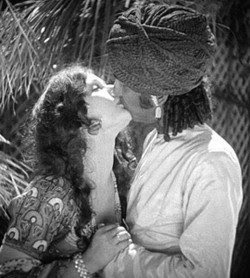 What makes both Saturday and Sunday long but rewarding slogs is the excellence of their morning films. (My thinking is, if you're at the Castro for an 11:30AM screening, why not stay the entire day and night?) Saturday's is the lovely 1929 silent film A Throw of Dice (Pranpancha Pash), directed by German director Franz Osten, who made Hindi films with Bombay Talkies producer (and Dice villain) Himanshu Rai. Osten/Rai's previous works Prem Sanyas (1925) and Shiraz (1928) have been shown at the San Francisco Silent Film Festival. Dice, a UK-India-Germany co-production that predates Bombay Talkies, dramatizes episodes from the Mahābhārata in which gambling junkie King Ranjit loses his kingdom and fiancée in a crooked wager instigated by a jealous rival. When Ranjit's loyal vassals learn of the cheat dice, they storm the vast deserts and majestic forts of Rajasthan (where the film was shot) in epic numbers. 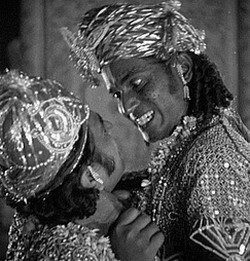 Dice's 2006 restoration and re-release is graced by a superb, dreamy score by British-Indian composer/musician Nitin Sawhney that perfectly fits the mixed-blood origins of this production. An open-air screening at London's Trafalgar Square in August 2007 drew an audience of 10,000 to see this production, which forgoes hyper-Orientalist stereotyping in favor of a lyrical and romantic pictorialism. A tiny pet deer prancing around the heroine's room is unutterably charming. I wished some of the spectacular long shots were held much longer to allow contemplating all the lavish detail—fabulous Rajput costumes and headdresses, elephants and camels and palace interiors. The action sequences are dynamic enough that I would gladly have sat admiring the décor during narrative breaks. 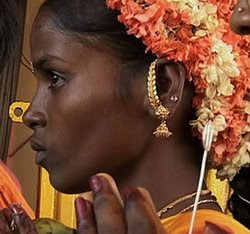 Saturday's midday screening, Nishtha Jain's Lakshmi and Me, is a slight letdown after the director's profound and brilliant 2005 documentary City of Photos, about urban photography studios mainly in Kolkata. But her good intentions are undeniable and often rewarding in this doc about Jain's relationship with Lakshmi, her maid of five years. A domestic since the age of 10, when the film begins she is working at six different homes for 10 hours a day. Despite the title and perhaps thankfully, the emphasis is more on Lakshmi, a dark-skinned village girl from a large, poor family whose patriarch is more often filmed snoring drunkenly than conscious. When Lakshmi falls in love and then gets pregnant with a young tailor from a caste even lower than hers, the father threatens to take the whole family away from Mumbai—they can't afford living there anyway. As the connections between the two women—employer/employee, filmmaker/subject, "white"/"black" and finally friends—inevitably blur, Jain takes her camera along on prenatal exams, domestics' organization meetings and tense scenes of family discord. Lakshmi and Me raises a number of important issues, both personal and political, that I wish she'd resolved more satisfactorily by the end. 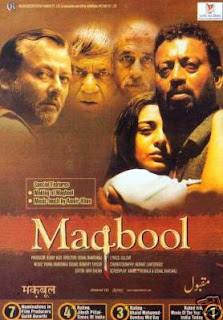 Due to a malfunctioning screener I wasn't able to get beyond the first hour of Vishal Bharadwaj's 2003 Maqbool. But what I saw made me want to finish up this Macbeth adaptation on the Castro screen on Saturday afternoon. Bulbous-eyed Irrfan Khan, who also plays the police inspector in Sunday's Slumdog Millionaire, is the title character, urged against his conscience to assassinate his adoptive father, who also happens to be the reigning Mumbai crime boss. Tabu plays Maqbool's Lady Macbeth (the two played Obama campaigner Kal Penn's parents in The Namesake), the godfather's mistress who is having a passionate affair with Maqbool. The first hour of this tale of vaulting ambition is awash in astrological predictions, corrupted officialdom and sacrificial blood—I hope the second hour is just as full of the direst cruelty. 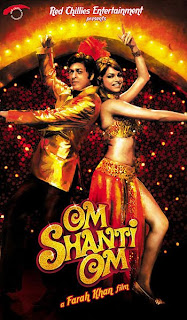 I haven't seen the Saturday evening screenings, but I'm told they're fun to varying degrees. The 2007 hit Om Shanti Om reunites megastar Shah Rukh Khan and director-choreographer Farah Khan for a romp through 30 years of Bollywood history and a few times as many star cameos. This is the kind of music-and-dance spectacle that sells out seats, draws huge South Asian groups, and turns the Castro into a lively faux-retro-'70s Mumbai theatre for nearly three hours.

Those who manage to get to the end of this evening may resemble the living dead, but at least you won't have trouble identifying with characters in the 2007 Pakistani slasher-zombie film Hell's Ground (Zibahkhana). I'm told that the novelty of its being (according to director Omar Ali Khan) Pakistan's "first modern horror film" attenuates early on, but that its flail-wielding, burqa-veiled psycho butcher provides genuine chills—see Michael Wells' Twitch dispatch from the 2007 New York Asian Film Festival. 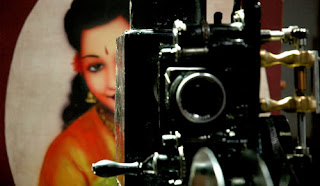 At last there's Sunday, which I recommend for the full day-and-night treatment. The first film, which for my money is the revelation of the festival, is K. M. Madhusudanan's 2008 Bioscope. The movie counterpart to Nishtha Jain's documentary City of Photos (which I mention above), this parable set in 1920s Kerala explores the hypnotic effect of the recorded moving image: while evoking a distant (un)holy memory, it pronounces a curse and steals the soul. A poor Indian inherits a Bioscope crank-operated movie projector from a Frenchman which he takes around to villages showing Western films and the earliest Hindi "mythologicals" (such as the 1918 Birth of Lord Krishna). His wife lies mysteriously ill, harassed by the recurring image of a white man shipwrecked on a beach. Meanwhile those bewildered villagers not entranced by scenes from Lumière, Caligari and Griffith begin grumbling about the evil box trapping the ghosts of dead white men. Bioscope's dreamlike images removed from their context and sound design themselves call forth memories of such visionary works as Aguirre, Wrath of God and Colossal Youth, which also sleepwalk us through troubled dreams and memories of colonialism. 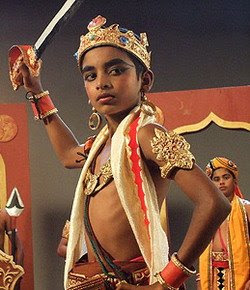 Channeling the myths of our past in defiance of the colonialist legacy is a more pragmatic task for the rural child protagonist of the charming King Siri (Siri Raja Siri) from Sri Lankan director Somaratne Dissanayake. Because he got top score in the nation, preteen Sirimal is sent against his will to a city school full of Westernized elites. There he's chosen to play the lead, the ancient King Siri, in a school play. He's clearly the most suited to the role—for a skinny runt he can be imperious—but can't afford the expensive costume, while an ungifted rich boy who longs to play king is scheming to snag the part (with his father attempting bribery). The obvious message—that the countryside produces children who are smarter, more disciplined, healthier, more polite and more attuned to their culture—threatens to make the kid an insufferable prig, but when he starts bawling his eyes out all is forgiven. Parents should bring their children to see this very endearing and often hilarious film. 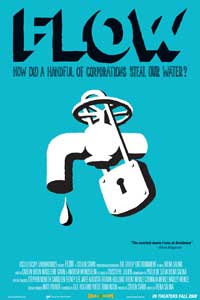 Not so hilarious—in fact enraging—is the import of Irene Salina's passionate 2007 documentary Flow: For Love of Water. It will make you throw your bottle of Pellegrino water across the room on learning that it's owned by Nestlé, who has diverted water from the public commons and sold it back to the same people at larcenous prices. Not to mention Coca-Cola, Pepsi, Vivendi and Suez. Privatization of water is a major trend in the world of Big Profit, and this well-made film tracks players on different sides of the debate over the global water crisis. Standout advocates are Vandana Shiva and Rajendra Singh. 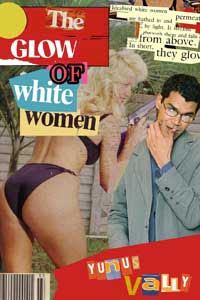 A more personal and probably more controversial documentary is director Yunus Vally's 2007 The Glow of White Women. Vally grew up black and devoutly Muslim in a sleepy, racist South African town. When he wasn't attending the madressah he was obsessed with magazines filled with images of beautiful white women. When he grew up and moved to the hipster town of Yeoville, he met white women who considered sleeping with a black man to be a blow (so to speak) for political defiance. In the High Fidelity spirit of narcissistic self-examination, Vally puts white girlfriends from his past before the camera to explain his attraction to them and vice versa. As he says in an interview, "As a black man during apartheid, you were accepted as human by having sex with a white woman. It was the one thing that could make you feel equal." 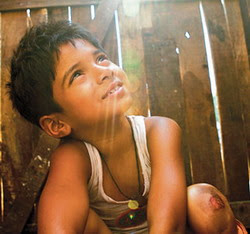 Finally, judging from its climactic place in the program, Slumdog Millionaire is the star of the festival, directed by Danny Boyle (Trainspotting, 28 Days Later) and set in the Mumbai slums. Glitzy, edge-of-your-seat question sessions from host Anil Kapoor during an Indian version of Who Wants To Be A Millionaire? provide the frame for a picaresque plot explaining how street kid Jamal manages to know all the answers. Jamal is rewarded for his expertise by torture-filled interrogation courtesy of suspicious police inspector Irrfan Khan. The new setting for Boyle seems to have energized his directorial style, boasting headlong virtuoso set-pieces like the "Amitabh scene" that will have you cringing and laughing happily into the Castro Street night.

So which day to go? Make up your own mind; for more info and ticket buying instructions see the festival's website.

Email ThisBlogThis!Share to TwitterShare to FacebookShare to Pinterest
Labels: 3rd i, Frako Loden

Long time reader of your blog michael, and its been a great place of learning and information.

Bioscope was one of the best movies that was screened in India at the Osian film festival 2008; sadly the movie is unlikely to ever see a release in the country and I wish we could ever get a chance to see those silent films too because somewhere our cinematic’s past has completely been erased from our own heritage. Sadly, our festivals prefer screening foreign films than our own.

Looking forward to watch Slumdog, and hope u have good cine-going experience.

Hi Nitesh--Apparently BIOSCOPE won the NETPAC jury award for best Asian film at Osian's Cinefan Festival of Asian & Arab Cinema. Those glimpses of the 1918 Birth of Lord Krishna (directed by "father of Indian cinema" Dhundiraj Govind Phalke, 1870-1944) were so tantalizing--like you I wish we could see more!--Frako (Google's giving me trouble under my own username)

Count me among the chorus of those clamoring for more of this vintage footage. Like Frako, I agree that Bioscope is remarkable, especially for its inclusion of these pieces of old film.

Slumdog Millionaire opens on Wednesday, Nov 12 at Landmark Embarcadero Center. It's playing on two screens on Nov. 12 and 13. I hope they don't pull it from 3rd i.

I'm so glad that there's been such a great response to BIOSCOPE. The really sad thing about a lot of the original silent films from the region is that they are in such a tattered condition. The indian film archive does not do any restoration really (money money money) - and the archive didn't start till 1964, by which time they had already lost over 50% of India's silent cinema heritage. The Indian film industry really needs to step up to the plate, and fund preservation projects (like the academy here), perhaps then there's some hope that we'll see more of these films. Do keep a lookout for a seminar that 3rd I will be doing in the spring on the history of Indian Silent Cinema. -- Anuj

Anuj: What a wonderful idea for a seminar! Will it be done in collaboration with the San Francisco Silent Film Festival?