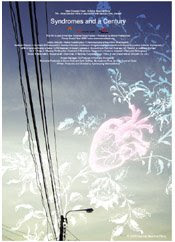 I'm fond of saying that the flesh is willing but the calendar is weak. In some instances, the calendar is out of control. And in yet other instances, the calendar is simply beyond anyone's control. Joel Shepard has had some misgivings about announcing YBCA's line-up for the upcoming season when we spoke back in mid-April. "Things change too much in the film world," he recently explained in email. "It's a constant dilemma in an institution like this. It's traditional for performing arts to plan well over a year in advance, and announce their 'season.' But film doesn't work this way (and it would be bad if it did), so I'm always trying to squeeze a round peg into a square hole."

Most immediately, there's been a shipping problem with the short films in the Apichatpong Weerasethakul's Mysterious Objects program originally scheduled for tomorrow evening and Sunday afternoon and the films won't arrive until next week. Joel has decided to screen Weerasethakul's Syndromes and a Century instead, and is offering the screenings for free as compensation (Thursday, June 26, 7:30PM; Sunday, June 29, 2:00PM). That's an extremely generous offer for something over which he had no control and—for anyone who has not caught Syndromes and a Century—this is a great opportunity. The Mysterious Objects program has been rescheduled for Thursday, July 3, 7:30PM and Sunday, July 6, 2:00PM.

Further, as Joel began working away on his Jia Zhang-ke retrospective, he learned that the Pacific Film Archive had already booked a complete retrospective in October/November. So, as it stands now, YBCA is letting go of that program. It would be great if Susan Oxtoby and PFA would consider sharing the retrospective on this side of the bay simultaneously with YBCA—that way both Berkeley and SF audiences would get a chance to see the work—but, that's totally PFA's call. Again, if any developments occur in that area, we'll be sure to post.

Finally, Chinese filmmaker Wang Bing has had to delay his YBCA residency until February 2009. He just received production funding to make a short. One always has to acknowledge the inherent wisdom of delay and remember that all good things come to those who wait.
Posted by Michael Guillen at 6/25/2008 03:06:00 PM

Free screenings of Syndromes and a Century are a pretty fantastic form of compensation!

Joel Shepard is a pretty fantastic (and fair!) programmer. He clearly cares about his audiences.

I know I'm going to take advantage of the compensation. Very excited to have a chance to see it again on the big screen, especially so unexpectedly. As enjoyable as I find anticipation of long-announced calendar items, there's a lot of appeal to spontaneity too!