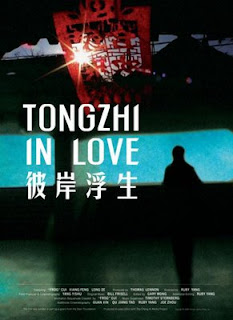 A Double Life—the working title of Ruby Yang's Tongzhi In Love—is boasting its West Coast premiere at Frameline32, screening with Yang's Oscar-winning documentary short The Blood Of Yingzhou District on Saturday, June 28, 2:30PM at the Roxie Film Center. Although unable to attend the festival proper, Ruby Yang was recently in San Francisco and we were able to discuss her "latest and most lyrical film yet." That conversation is up at SF360.

Tony An has written that—riding the waves of rapid social and economic progress in China—many gays (tóngzhì, as they are called in China) are beginning to enjoy a more tolerant atmosphere, tasting newly found freedom in such big cities as Beijing. However, most of them cannot come out to their parents. They continue to live a double life because—besides the conservative views toward gays—they also face an immense pressure unique to Chinese culture based on Confucian teaching. He quotes prominent Confucian scholar Mencius: "Among the three major offenses against filial piety, not producing an heir is the worst." More than two thousands years later, Tony explains, a billion Chinese people still take Mencius's words close to the heart, creating an obvious challenge for tóngzhì, many of whom—due to the one child policy in modern China—are the sole carriers of their family bloodline.

It's a small town, yeah? Words are spreading around. :) Thanks Michael.

You're welcome, Tony. I thought your Mencius quote was an important detail to include.