As Kate Carroll details for the Frameline program, Jonathan Lisecki's short Woman In Burka "follows real-life actress Sarita Choudhury through fictionalized auditions for a new film. Is it a drama or just a cheap horror flick? None of the auditioning actresses (each of whom, it seems, have appeared in Law & Order at some point) really know. But who cares? It's a job! This darkly comedic short shines a spotlight on race, aging, gender and the actor's eternal quest for validation—and a paycheck." As part of the "Don't Go" program of shorts, I was alerted to Woman In Burka by filmbud Barry Jenkins (Medicine for Melancholy).

Winner of this year's Spirit of Slamdance Award and the Arizona Film Festival Merit Award, Woman In Burka is—as Nick Haramis accurately describes it for Black Book—"a real knee-slapper." One might say it's a post-9/11 sandwich served on dark wry. I joined the appreciative throng who poured into the AT&T Festival Pavilion to take part in the program's Q&A.

* * *
Asked by Jennifer Morris how his film came into being, Lisecki admitted that Woman in Burka was an experiment to see if he could even make a movie. He'd done several plays and he was tired of the same 15 friends seeing his work, period. He decided to do something that maybe other people could see someday. He had just come off of an audition for the role of a stereotypical gay assistant for a television series called Lipstick Jungle. The role was disgusting but he really wanted the money. The casting director, who was straight, came up to him and said, "You're really in the mix if we don't go gaysian." Lisecki thought, "Are you allowed to say gaysian as a straight casting director?"

His good friend Sarita Choudhury had experienced similar demeaning auditions after 9/11. "She's Indian," Lisecki explained, "but it doesn't even matter to these people." When Law & Order did a call for an actress to play an Iraqi woman, they decided Sarita looked "close enough." When he and Sarita got into a conversation about that, he found himself wanting to explore the issue. 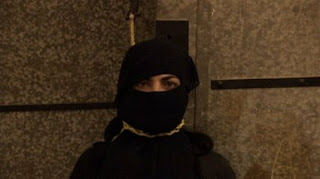 Over the course of a year he filmed scenes piecemeal and then put them together. He didn't have a script; he created the story as he went along. The actresses used their own names and they all really did have roles on Law & Order. Sam Rockwell really was Sarita's ex-boyfriend (though not the father of her baby, as in the film). He wanted to use the actors' real names to establish a hyper-reality.

The Law & Order clips were actually from the television series and—when I asked whether he had permission to use the clips—Lisecki scoffed, "Oh, permission!" He knew, if he needed to, he could make an argument for fair use and parody; but, his friend Annie Parisse assured him that—if he ever got in trouble for it—she would bat for him. She really was on the show for two years and knew the series creator. Permission issues would only arise anyway if Woman In Burka were picked up for distribution; it's a non-issue at film festival screenings.

He shot the film digitally and didn't spend a whole lot of money making it. When it was accepted into its first film festival, that's when he had to come up with money for the sound mix and color correction and all that kind of stuff, which cost him about $3,000. "I begged. I borrowed," he explained. "I work at a place that makes commercials so they loaned me their equipment and loaned me their editing machine." The lady who represents Kerry Washington worked at his job as well. He reads scripts for her as a day job. Basically he went to one of Kerry's press junkets with his camera in his book bag and asked, "Hey Kerry, could you say a couple of lines for me?" because he wanted her in a scene. "And that's how you do it. You just ask, ask, ask, ask…." 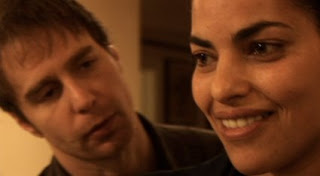 Lisecki wanted to draw attention to how inauthentic ethnic portrayals often are on television or in film. He recalled one artistic director at a film festival who oddly protested, "You know they wear burkas in Afghanistan; they don't really wear them in Iraq." Lisecki raised his eyebrows and countered, "Yes, I know that. The people who are making the movies don't know that. Those people don't care. That's the point!" Lisecki has discovered that there are more than enough people who lack any sense of humor and want to get angry at anything, which is fine, let them go right ahead. "There's always someone who will pick out the one thing in your 21-minute movie that you've worked on all year to get all up in arms about and that's great; at least you're affecting them in some way."

I asked Lisecki if he would talk about the clever graphic on the film's postcard, which shows a woman in burka who looks suspiciously like the cartoon representation of I Dream Of Jeannie. He said it was weird but he just knew that was what was supposed to be on the post card. He wanted a woman in burka with I Dream of Jeannie eyes because, in the end in a Hollywood movie, the woman in burka would be played by the white, fair-haired girl. He asked a friend to design it to those specifications and he got the image back within 20 minutes. When he got into Slamdance, which ran at the same time as Sundance, he postered up and down the street and is convinced that's why both his screenings sold out; people responded to the graphic. Nobody cared about the photograph of the famous actors on the flip side. I encouraged him to print up t-shirts and he admitted to being behind the times on monetization.

As for the future of Woman In Burka, Lisecki responded that, yes, the film was going to screen at other festivals but that—as far as he was concerned—he could just stop now because it would never be any better than being screened on the giant screen at the Castro with such an enthusiastic audience. At other festivals his film gets shown on a screen the size of a TV. He's on his way to a film festival in Austin, even though he's "scared to death of Texas!" As for future films, he wants to make a short about the first gay divorce. "Just kidding!"