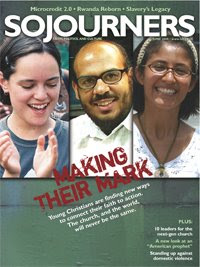 With its frequent forays into music, politics, literature and the visual arts—along with its keen attention to cinema—Darren Hughes' Long Pauses requires a broad sensibility. In his most recent entry, Darren interviews Lee Isaac Chung—the director of Munyurangabo—for Sojourners magazine. 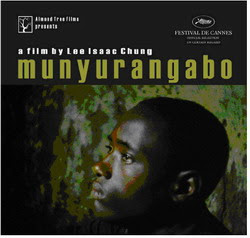 Munyurangabo was—hands down—one of my favorite films at the 2007 Toronto International Film Festival, where I likewise sat down to talk with Chung and his collaborator Samuel Anderson. I'm really glad Darren liked the film as much as I did and—as I recently mentioned to Rob Davis at his Errata website—it's always enlightening to see how colleagues approach interview subjects alternately. With much more of a Christian focus, Darren highlights the passage from Isaiah 51:19-20 that serves as Munyurangabo's epigraph: "These double calamities have come upon you; Who can comfort you? Ruin and destruction, famine and sword; Who can console you? Your sons have fainted. They lie at the head of every street, like antelope caught in a net. They are filled with the wrath of the Lord and the rebuke of your God." This passage had been quoted to Chung by a Christian survivor of the Rwandan genocide. 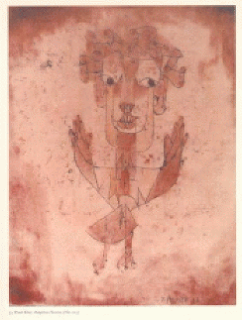 Responding to Darren's query of whether Munyurangabo is an Old Testament film or a New Testament film, Chung referenced Angelus Novus, Paul Klee's 1920 water color, which—while it was in his possession—Walter Benjamin interpreted as "a usable metaphor for history" in Thesis IX of his Theses on the Philosophy of History: "A Klee painting named Angelus Novus shows an angel looking as though he is about to move away from something he is fixedly contemplating. His eyes are staring, his mouth is open, his wings are spread. This is how one perceives the angel of history. His face is towards the past. Where we perceive a chain of events, he sees one catastrophe, which keeps piling wreckage upon wreckage and hurls it in front of his feet. The angel would like to stay, awaken the dead, and make whole what has been smashed. But a storm is blowing from Paradise; it has got caught in his wings with such violence that the angel can no longer close them. This storm irresistibly propels him into the future to which his back is turned, while the pile of debris before him grows skyward. This storm is what we call progress."

Benjamin's applied interpretation of Klee's Angelus Novus has proven effective. Picking up Chung's cue, Darren skillfully wove Angelus Novus—admittedly more Benjamin than Klee—into his piece on Munyurangabo, much like Lines Magazine used it as a lens to focus on Sri Lanka. At the University of Chicago's Critical Inquiry, O. K. Werckmeister considers the "continuous ideological debate about the political validation of intellectual culture among nonpoliticians" and decides that Benjamin's interpretation of Angelus Novus has become a "composite literary icon for left-wing intellectuals with uncertain political aspirations." I find all of this quite fascinating and am thankful that Darren has steered me to these concerns.

Darren has had two other articles published by Sojourners; both equally fine reads. Earlier this year, he critiqued Ron Austin's In a New Light: Spirituality and the Media Arts. Back in 2005, in a piece entitled "Fallen Creatures In a Fallen World"—how Augustinian a title can you get?—Darren profiled the films of John Cassavetes, whose work Darren sees as "a powerful corrective to Hollywood's superficiality."
Posted by Michael Guillen at 6/05/2008 10:51:00 AM

Darren does have a way with words, doesn't he? I keep encouraging him to write more; but, he won't listen to me.

I discovered that Benjamin essay almost ten years ago, soon after reading Tony Kushner's Angels in America for the first time. Michael, did you know it was the inspiration for the central metaphor of those plays? In fact, Kushner came up with the name of the lead character, Prior Walter, when a friend mistook something he had said. Their exchange went something like this:

"Are you talking about Walter Jones?"

"No, Walter Benjamin. The prior Walter."

Anyway, that one paragraph you quoted is as succinct a description of my world view as I'm likely to ever find, so I was really pleased when Isaac mentioned it. It also happened to be a really smart answer to my question, because "Angelus Novus," I think, is both Old Testament and New.

(I'd almost forgotten about that Cassavetes article.)