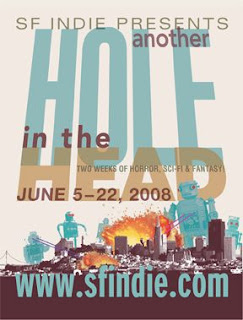 IndieFest's 5th Annual Another Hole in the Head Film Festival is well under way for the next two weeks. I've already written up Machine Girl, Exte: Hair Extensions, and Jack Brooks: Monster Slayer; over at the SF Bay Guardian, Cheryl Eddy's wiped the regurgitated fly goop off herself after watching Circulation and Homeworld; and Dennis Harvey—having been chased by zombies around the block and back—remains nonplussed and offers a wry travel guide at SF360. 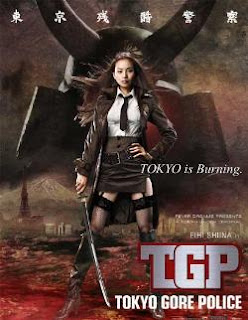 And because Holehead08 just can't have too many cool Japanese flicks at the festival, they've added a new Closing Night Film: the West Coast Premiere of Yoshihiro Nishimura's Tokyo Gore Police, screening Sunday, June 22, 2008, 8:00PM at the Brava Theater.

Yoshihiro Nishimura, who has crafted the FX for Holehead08's Machine Girl and Exte: Hair Extensions, tests his directorial chop-chops with Tokyo Gore Police, which Todd Brown at Twitch announced earlier this year, following up with a gallery of behind-the-scenes photos, trailers one and two, and the announcement of its East Coast premiere at New York's 2008 Asian Film Festival. 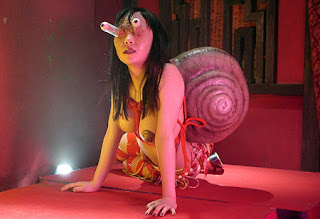 I like Grady Hendrix's subdued reaction: "Tokyo Gore Police is what happens to Machine Girl when it's been put in the hyper-evolvo chamber for a thousand years, blasted with atomic radiation, rubbed with mysterious balms from the land of Gadzooks! and has crystal meth pumping through its veins instead of blood. Think Starship Troopers meets Peter Jackson's Dead Alive with Shinya Tsukamoto and David Cronenberg's mutant dwarf freak baby standing on its back and howling."

I get the feeling that like Machine Girl, the best part of Tokyo Gore Police is the poster.

Eihi Shiina was good in this, she's knows how to use that sword
http://japansugoi.com/wordpress/sexy-eihi-shiina-tokyo-gore-police/