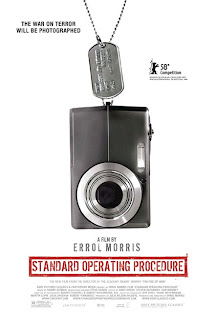 Remember the cautionary adage that too much of a good thing might be bad for you? Would it follow through inversely that too much of a bad thing might be good for you? Recent documentaries on the atrocities at Abu Ghraib—Ghosts of Abu Ghraib, the Oscar-winning Taxi to the Dark Side and, most recently, Errol Morris's Standard Operating Procedure—seem to suggest so, as if revealing in gruesome detail what went down at Iraq's notorious interrogation center will somehow provide the remedy I noted lacking in Tom McCarthy's The Visitor, presumably by shocking audiences into awareness and out of complacency into action. Unfortunately, I'm not sure that effect can be expected at this late date in our country as the republic (clearly, we're no longer a democracy) slouches towards Bethlehem to be born an empire (if not at least a corporate oligarchy), and as from the sidelines the Republicans slyly observe the Democrats eating their own. I even wonder if such explicit depiction and—in the case of Standard Operating Procedure—gory reenactment worthy of pop culture's best horror flicks will not induce fatigued avoidance and a mistrust of investigative journalism guised as entertainment?

It's an important question. Recently, while hosting the Val Lewton blogathon, I read Alexander Nemerov's Icons of Grief: Val Lewton's Home Front Pictures. Two of the most compelling sources that Nemerov filleted to serve his thesis were James Agee's October 1943 Nation essay "So Proudly We Fail", and Manny Farber's New Republic essay "Movies in Wartime" published January 1944. They're both fascinating in their critique of—not only films during WWII—but, American audiences at the movies.

Nemerov writes, "Agee wrote in 1943 that Americans at home 'remain untouched, virginal, prenatal' about the war, and that 'our great majority will emerge from the war almost as if it had never taken place.' " At that time, in that war—as historian George Roeder noted—the War Department censored all images of dead, wounded, and disturbed American servicemen until late 1943, when, Nemerov continues, "it realized that the public's widespread ignorance about the brutality of the fighting was a potential drain on morale." (2005:3)

In his New Republic piece, Manny Farber complained that most war movies of the time were "slight" and that "the classic war film formula sterilized and abstracted death." Invariably, every character in a WWII film became a hero, one way or the other. Nemerov summizes: "As Farber recognized, the tragic deaths of servicemen and civilians in the era's numerous war films were precisely not the moments to experience anything like pathos. 'Death and destruction in war are diluted almost out of sight by various devices.' " (2005:3-4, 78, 89.) 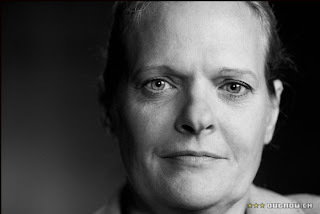 "Only one of the group [of soldiers] would be killed," Farber wrote, "and so the death was hardly noticed, or the emphasis turned from individual dying to mass slaughter so that it became no longer a matter of men dying but endless streams of extras running wildly out into the open and falling down. Death would be further sterilized by switching immediately to more heroics, intense activity or scenes with a merry note." (Quoted in Nemerov, 2005:184, fn. 78.)

Amidst these unrealistic portrayals of the war, the films of Val Lewton expressed a homefront depression, a grief over those lost, though without—Nemerov proposes—any explicit reference to the war. "World War II haunts the horror films of Val Lewton," he opines at the very beginning of his study. "Though none is about the war, it appears in them all the same, even if we never catch a clear glimpse of it. Like a ghost moving through the house, it slams doors and tips over the pottery, inverts pictures on the wall, and shatters windows with rocks never thrown. In movies celebrated for their portrayal of the unseen, the war is the singular invisible beast, the Damned Thing, that stalks around and bends the grass as we look in vain for shade of hide or hair." (2005:1)

Much has changed, of course, since then. As mentioned earlier, the War Department—realizing that the American populace was detached and somewhat indifferent to military efforts overseas—applied a different strategy and in late 1943 began leaking images of death to the American public. "Life magazine published the essay 'Three Americans,' along with a photograph showing the bodies of three dead GIs on a beach in the South Pacific, the tide having washed over them at least once." (2005:30) Photographs taken during the Vietnam War had much to do with turning public opinion against that war and applying pressure on national policy. Perhaps one too many color photos of the atrocities have tipped the scale and inured the American citizenry against the loss of life? Perhaps the real story these days in this war is the loss of our ideals and purpose as a nation? The ultimate horror story?

The connection between wartime and spikes in audience appetite for the horror genre is well-documented. "People want to be scared when they're afraid," Nemerov suggests. In an interview conducted in June 1945 with John L. Scott of the Los Angeles Times, Lewton himself acknowledged that even servicemen overseas liked watching "fantasy-mystery" movies. In the wake of the Vietnam War there was a resurgence in horror films. And now, it seems, as the United States bunkers in for the long haul in the Mideast, horror movies are once again the rage, expressing outrage, only curiously now the really good ones are called documentaries and they frequently portray not just soldiers we have lost but soldiers who have lost their way. Standard Operating Procedure could be a text book example. We've come a long way from Lewton's belief that "dark patches" are all that's necessary to trigger horror in the imagination of audiences to the relish Errol Morris takes in reconstructing the events at Abu Ghraib in horrific detail. Like Brian DePalma's Redacted, I can appreciate Standard Operating Procedure for the horror film it is, if not for being the incisive documentary it purports to be. As a horror film, it's pretty repulsive and frightening. 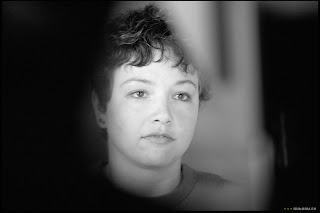 Michael Chaiken's write-up for the current issue of Film Comment is spot-on: "The stylistic armature of Standard Operating Procedure is the gore-pornography of films such as Saw and Hostel. Morris depicts Abu Ghraib as a carnival of criminality not unlike a Hammer horror film as scripted by the Marquis de Sade. Where reenactment has served the director well in the past, here the film's bloody dramatizations, set to a menacing score by Danny Elfman, suggest a fundamental distrust of the efficacy of the word over the image and a bland assumption that audiences have lost their ability to empathize." Chaiken quotes Susan Sontag's Regarding the Pain of Others: "Being a spectator of calamities taking place in another country is a quintessential modern experience." He encapsulates that "Sontag makes the grim argument that the relentless frequency with which we are confronted with images of genocide, execution, and torture has done little to abolish their occurrence. On the contrary, she suggests that our repeated exposure to so much horror, to so many crimes, has only fortified our defenses." (Film Comment, March/April 2008, 44:2, p. 70.)

Yes, what happened at Abu Ghraib is unconscionable. Yes, the criminality extends to the higher-ups who have washed their hands of the matter by scapegoating inferiors. Yes, those convicted are pursuing the "talking cure" in front of the cameras and come off as being quite misguided, inexperienced or embittered pawns and basically—whether one chooses to "forgive" them or "understand" them or not—they'll have to live with their own actions. Yes, it is still what is being redacted from our everyday media that haunts public morale. Yes, in the face of such human depravity and governmental corruption, the average American citizen once again has no remedy. All of this I caught from Rory Kennedy's Ghosts of Abu Ghraib. All of this I understood from Charles Ferguson's No End in Sight. All of this was compellingly clear in Alex Gibney's Taxi to the Dark Side. So I have to ask: what is to be gained by upping the ante and presenting the issue as a horror film guised as documentary? As much as I admire the work of Errol Morris, Standard Operating Procedure seems like a slickly-produced misfire. I'm still trying to shake off the image of attack dogs in slow motion baring their teeth and chomping at human flesh. Why did I need to have that enacted in order to understand this issue any more clearly?

Standard Operating Procedure and have written a review saying so (http://www.chrisknipp.com/writing/viewtopic.php?t=1015). The unfortunate thing is that Morris has such a high reputation he is getting and will get a lot of knee-jerk adulation for this narrowly conceived and poorly executed film.

The first part of my comment got cut off by accident. It was of course "I agree with you on [Standard Operating Procedure and. . .]".

Well, as some have said, no entourage is good for an artist, whether "the perils of benefactors or the blessings of parasites" (J. Mitchell). Thanks for stopping by to offer your own perspective.