PEDRO COSTA (and Others) on Casa de Lava and Tarrafal, Part Two 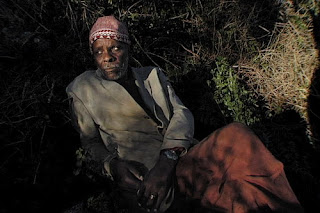 In his Film Comment article on Pedro Costa, Thom Anderson describes Colossal Youth as "an intentionally imperfect film … that is loosely constructed and almost certainly obscure, which creates unfortunate difficulties for some viewers. You probably have to see it at least twice to get it, and to me that is not a virtue." Compounded by Costa's forthright admission that he is still discovering the film himself and that one of his main actors had to explain a major plot point to him at its Cannes premiere, Anderson generously sets virtue aside and suggests: "Perhaps it can be a film in progress for us as well, as we watch it and think about it later. Its construction allows us to shift scenes around and remake it in our heads." (Film Comment, March/April 2007, Vol. 43:2, p. 61.)

In my case, I definitely had to watch Colossal Youth twice and each viewing was a distinct experience; the first befuddled and bedazzled and the second distanced and alert. The same could be said about Costa's short Tarrafal, which I initially caught as part of the O Estado do mundo (State of the World) omnibus at Yerba Buena Center for the Arts. Although I appreciated it well enough when I first saw it—"Pedro Costa's Tarrafal is an equally powerful film with its allusions to the Tarrafal prison on Santiago Island, Cape Verde. Its narrative moves forward first through cautionary ancestral tales regarding the inescapable summons of death and then through the voices of ghosts who remember their tortured past. It is a political tract rendered exquisitely as a haunting ghost story. Its short length is amplified by textural density."—I didn't fully appreciate Tarrafal until my second viewing, deepened by Costa's commentary.

Introducing the film, Costa identified Tarrafal as the village on Santiago Island, Cape Verde, off the coast of Senegal, where in 1936 the Portuguese came up with the idea of creating a prison patterned after the Nazi concentration camps. Many of the Cape Verdeans he now works with were born in Tarrafal and come from that part of the island.

Tarrafal addresses a social issue "we" all face, namely deportation and expulsion. "It's happening all over Europe," Costa explained, "Here, I don't know, it's the Mexicans I think; [but,] it's happening all over Europe, in France, in Spain, in England, in Portugal." He and his crew experienced it firsthand when one of the young actors who has been in all his films, José Alberto Silva, was recently served his deportation papers, despite his having been born in Portugal. To offset Silva's upset, Costa offered to channel funds received from Lisbon's Calouste Gulbenkian Museum—intended to finance a 15-minute film for the State of the World project—into making a film about Silva's deportation. (Coincidentally, the Calouste Gulbenkian Museum is the same museum pictured in Colossal Youth, which Costa included to address and redress the issue that Ventura—who was one of the contractors who built the museum—had never been allowed access.)

Costa decided that the theme of involuntary deportation fit perfectly within an examination of the state of today's world, especially for the disenfranchised and marginalized. "I think it's a horror movie," he explained, "That we made very quickly at the beginning of last year."

The film's setting is important because—at the actors' request—they didn't want to do yet another film in the housing project, neither in Silva's apartment nor Ventura's. "Where do you want to shoot then?" Costa asked them and they said they weren't sure but they wanted it to be away from the apartments. So they walked across the highway to a clearing where there was some tall grass and a gnarled tree and decided to film there. That's when the relevance of this decision dawned on Costa. It was as if the actors themselves, the subjects of the film, were saying that through a series of displacements—first from Cape Verde to Fontainhas in Lisbon, then from the relocation from Fontainhas to Casal Boba, and then the eviction from Casal Boba and deportation from Portugal—they had become complete refugees with no home to call their own. All they could claim was a patch of earth and the open sky. They wanted the film to be a protest of the conditions—the heaviness—foisted upon them and whose burden they must shoulder. 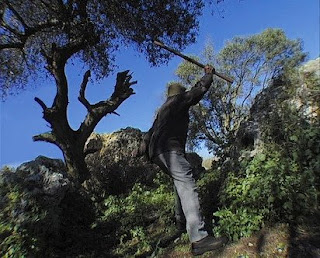 Again, the theme of weight, of gravitas, or—as Costa himself said it in his Tokyo seminar "A Closed Door That Leaves Us Guessing" (published in Rouge 10, 2005)—"Filmmaking is a very real and serious profession. Serious means heavy, and sometimes the weight of things can be very heavy. The weight of feelings is something to handle with balance and common sense, and so we must never laugh when somebody speaks about God or the Devil. In effect, when we speak of God or the Devil in cinema, we're speaking about good and evil, we're talking about people. We're speaking about ourselves, about the Devil and the God in us, because there's no God up on high, and no Devil below."

Costa has frequently asserted that he wants to create a cinema that deals with "what is not working", which is to say a socially responsible cinema that looks at "where the evil lies between you and I, between me and somebody else, so we can see the evil in society, and so we can search for the good."

In "A Closed Door That Leaves Us Guessing" Costa likewise compares scenes from Jacques Tourneur's Night of the Demon and Robert Bresson's Money, wherein cursed pieces of paper are exchanged to reference "what is not working." This shed considerable light on Tarrafal where—along with the folk tale Silva's mother tells him of a man who delivers death messages on pieces of paper—the government's deportation notice becomes a commensurate cursed piece of paper. When I asked, Costa confirmed the Tourneur connection.

"Tarrafal is a remake of Jacques Tourneur's Night of the Demon," he offered, "where there is this strange parchment that is passed by this very strange man called Karswell—the Devil is called Karswell in this film—and he passes this [parchment] to Dana Andrews, who is a skeptic, a very cold, rational man. This paper actually says [he has]—I don't know how many—maybe 12 hours to live. So [Tarrafal] is moreorless the same story."

Though his friend José Alberto Silva was born in Portugal, his mother Lucinda Tavares—seen in the film—was born in Tarrafal. In Casa de Lava Costa included a scene of the Tarrafal cemetery and the hospital that used to be the Guardians' ward. When they began thinking about this story with this evil letter, this deportation notice from the Minister that you see in the end, Costa recalled Tourneur's film. "It's good the classics," Costa smiled, "because you can go to one of them. It's like Godard. You just have to pick one and everything comes."

Actually, he remembered Night of the Demon when José Alberto's mother was telling her folktale about the man in Cape Verde who had this evil, wicked way of passing a death message to people. The original idea was to make a 15-minute film where José Alberto would say good-bye to a lot of things—his mother, some friends—and in the first scene they shot, where José Alberto and his mother are sitting down and conversing, José Alberto was supposed to say good-bye to his mother. As customary, they filmed the scene every day for a week, José Alberto and his mother Lucinda sitting down in this shack talking, from 9 to 1, then they'd break for lunch, and continue filming from 2 to 6. After a week of filming, they still hadn't said good-bye to each other. They didn't want to. They loved each other too much.

To ward off the good-bye, Lucinda began telling José Alberto this story in one of the takes and it was then Costa remembered the Tourneur film. That's when they associated the cursed paper that delivers death with the notice of deportation.

"Being that you have moreorless paid homage to Jacques Tourneur in two of your films and have described him as a great artisan," I asked Costa, "can you qualify what it is that you admire so much in Tourneur's work?"

Costa described that he had something of a schizophrenic split between Jacques Tourneur on one side and Staub and Huillet on the other. Though this is all right for a film lover, Costa said it was "very dangerous for a filmmaker to have a Straub/Tourneur [split]. Sometimes I'm very dizzy. Not long ago, when Danièle [Huillet] was still alive, I forced [her and Jean-Marie Straub] to tell me some things about Tourneur, because they never talked about him. Actually, they liked some of his films. What they like[d] was the craftsmanship, not only Tourneur but a lot of filmmakers that were just—like I said—artisans, responding to the producers—'You have to do this and this and this'—some of course, like Tourneur, could bring in the films something more. But all of them, they're all very good, they were all so good with space. This side I have of Tourneur [that] is dark, mysterious, romantic or poetic, I cannot help it. The girl can't help it. [Costa chuckled.] But it will stay there. I saw a lot of films by Tourneur when I was young, and not only the ones more related to ghosts or like that. There's a very very beautiful one that is not a Western but almost, it's called Stars in My Crown [1950]. In Tourneur's films they speak in very low voices. They're quiet films. They're almost fading all the time. When I was younger, I loved Tourneur because I had the feeling that I didn't know if the films could go on to the end, they had this fading effect. I was afraid they would disappear; they're so slow."

Argentine film critic Quintín has written that for Costa, Jacques Tourneur and the Straubs "are kindred spirits, even if one is known as a spiritualist cult follower while the others are famously committed materialists. Costa claims that such categorization is nonsensical, and that both Tourneur and the Straubs, as well as Ozu, Ford, Lang, and other classical filmmakers, share the same vision of cinema, one based on precision and truth." (Cinema Scope 25, Winter 2006, p. 67.)

Critical Overview of Tarrafal
Acquarello's write-up of Tarrafal for Strictly Film School is, without question, the most respectful, insightful and thorough; correctly perceiving the outdoor setting "as a metaphor for Pedro Costa's densely layered themes of dislocation and statelessness" and "the state's arbitrary dispensation of deportation and eviction notices in modern day Portugal" as the "impersonal, life-altering communication" of the "blood-sucking phantasm who foretells a person's hour of death by surreptitiously leaving letters in the most mundane of hiding places to be subsequently retrieved at the time of their immutable appointment." Moreover, Acquarello defines a "sense of surrogacy and transplantation", which is to say that José Alberto's fate—his involuntary deportation—is one that could equally be had by any of the Cape Verdeans at Casal Boba. Their helplessness in the face of the State is interchangeable. Again, exile is imprisonment. Acquarello concludes: "[T]hese parallel testimonies of dislocation, separation, entrapment, and fatedness unfold through supplanted images of interchangeable, moribund, drifting ghosts that integrally reflect their own erasure and social invisibility." 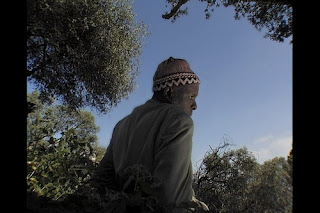 Daniel Kasman notes that Tarrafal continues "the aesthetic and production technique Costa has used since In Vanda's Room, but like the jump between that film and Colossal Youth, Costa seems to be distancing his later films from that movie's 'purer' documentary impulse, adding layers of obliqueness, mystery, and cine-influences more overtly." It would be difficult to find a better description of the gradual evolution of Costa's Tourneur/Straub split.
Posted by Michael Guillen at 3/12/2008 12:29:00 AM

Your coverage of this series is so fantastic Michael!

Thank you, Daniel, kind of you to say. Be sure to check out Ryland's coverage at The House Next Door as well.