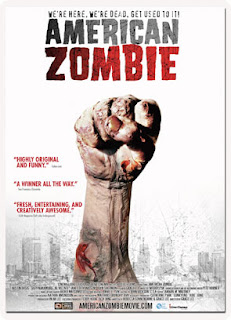 I've long felt that Grace Lee's American Zombie and J.T. Petty's S&Man would be the perfect doublebill date, primarily because they're both refreshingly honest about being false documentaries morphing into the horror genre. As I've already written, horror movies are once again the rage; but, curiously the really good ones are now called documentaries.

I caught American Zombie when it played the 2007 San Francisco International Asian American Film Festival and spoke briefly with Grace Lee at that time. The film opened theatrically in Los Angeles this weekend, with no immediate prospects in view for a Bay Area screening. I was holding off on posting my interview until the film appeared Bayside; but, consider it might be more important to advance its Los Angeles premiere in hopes firing that booster engine propels it to San Francisco.

* * *
Michael Guillén: I know you don't like to use the term "mockumentary" so we'll call American Zombie a genre mash-up, how's that? My first question is where can I buy my "Jesus Was the Original Zombie" t-shirt?

Grace Lee: Actually, it's so funny. At South by Southwest—where I was last week—I was told I should make buttons or something. It might be interesting. There's so many merchandising prospects with this movie that I never even thought about.

Guillén: Well, I hope you make buttons or t-shirts or something because that's my favorite slogan right now.

Guillén: Like American Zombie, S&Man is a documentary that gradually shifts into a horror film. Yours, however, has its own unique tone, specifically through the way you comment on social ills through sophisticated (albeit dark) humor. How did you shape American Zombie? How was the idea formed into the finished film?

Lee: I made this movie called The Grace Lee Project first. It was a personal documentary and, in a sense, it was about me and women who shared my name and the stereotypes of identify confusion surrounding this very Asian American name. I've sort of been obsessed with movies about identity and politics and things like that. I felt like zombies are a blank slate. Zombies are kind of out there in the zeitgeist right now; but, it's not like I'm a zombie movies aficionado. It just sort of started with a friend of mine. We started talking about ideas and the film was inspired by these strange type of dreams that she'd been having. I thought it was so interesting the juxtaposition between a very mild-mannered girl having these violent dreams, sort of like the character Lisa in the film, who's incredibly free but dark underneath. What's underneath the surface of this happy-go-lucky person?

Guillén: It's interesting that you think of zombies as being a kind of zeitgeist sponge that can represent any segment of the population. In your film, they play into minority politics. After garnering several accolades for The Grace Lee Project, which established you as a documentary filmmaker, do you feel you have jeopardized your journalistic credibility in any way by following up with a false documentary? Or do you care?

Lee: I don't really care. I'm interested in many different things. If I make a regular documentary again and people don't want to see it because they feel I've compromised myself by making a movie with zombies in it, I think they've missed the point. They've missed the joke. Identity politics is as much a target as myself. 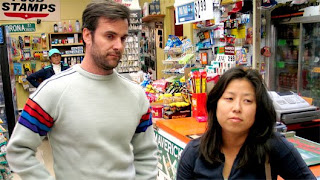 Guillén: It takes a certain sophistication to make fun of your own credibility. As the documentary filmmaker in American Zombie, you're trying to steer the focus of the documentary. Both you and John Solomon in the film have agendas regarding what the film should be and how it should be shaped. That tension between the two of you speaks volumes about the process of documentary filmmaking; how it's organized; how it's accomplished; the fallacy of its alleged objectivity.

Guillén: The final scene where you, as a documentarian, are faced with a horrific quandary about what to do with an injured party you have feelings for, is a chilling choice. But this is exactly the risk that any documentary filmmaker takes when they start a documentary and don't really know half the time how the film will evolve.

Lee: Glad you got it!

Guillén: In the film the zombies, or "revenants" as you call them, come into being as the result of violent deaths. You situate this scenario in Los Angeles and yet there's not a single Black revenant in your film. Since Blacks are such a strong community in the Los Angeles metropolitan area who have suffered a history of violence, I found their absence notable. Did you think about that at all?

Lee: Not in those terms. I definitely knew we wanted to make a portrait of Los Angeles and—I don't know what you thought about the film—but a certain joke we had was that this was Crash Zombies.

Guillén: Don't get me wrong. I enjoyed how you used zombies to represent a marginalized minority and perhaps that suffices in and of itself to represent ethnic minorities. Usually when you see a film about zombies, they have a signature physicality. They move slow. Drag their feet. That kind of thing. I like how you shifted that a bit and had them move regularly so that they were more like everyday people trying to fit in with the non-revenant population. Maybe some skin was rotting and falling off. Maybe there was a maggot or two.

Lee: Judy, the assimilationist zombie, is in denial about who she really is and kind of comes into her own at the end.

Guillén: How did you develop the four main characters? 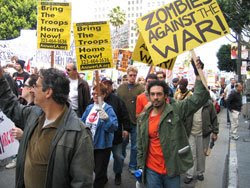 Lee: The film started with the characters. They were like archetypes. We definitely wanted a woman because you don't see that too often. We wanted an activist, someone from the marginalized community who could speak for them.

Guillen: I found myself chanting for a while, "We're here. We're dead. Get used to it!" [Laughter.]

Lee: We wanted a slacker kind of guy. We definitely wanted a character who was searching for identity, what happened to her, her lost memories, obsessed with recovering the past. We had this idea that Grace Lee, me, is a documentary filmmaker caught up in socially conscious issues who just wanted to find out what the zombies had to say.

Lee: He was trying to make a monster movie.

Guillen: I was trying to figure out what was next for you from the press notes; but, I wasn't sure if I could rely on them because they're so wry. You have some real information with some fake experts in there. I couldn't tell what was real or not.

Guillen: No, I get the joke. The press notes as fact are as unreliable as the documentary as fact.

Lee: It's interesting how people really want to believe. I've had so many conversations with people where they would ask, "What's your project?" "Oh, it's a"—and if I don't insert the word 'fictional'—"documentary about zombies living in L.A.", they'll say, "Oh great great. What do you mean by zombies?" "The living dead." "Oh. Okay. That's really interesting. I'd love to see it." [Laughter.] People just accept things at face value, which I also find to be indicative of our culture.

thanks for doing this interview, Michael. i've missed three opportunities to see this film, so I hope it comes up to SF again so I can make amends for those previous moments of poor planning.

Dude, thanks for swinging by to comment. American Zombie is really a fun and even scary mash-up; I hope San Franciscans have the chance of a Bay Area opening.