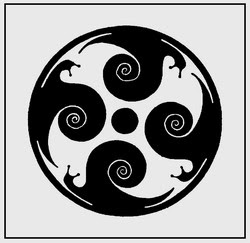 "Coming full circle" is an inexact term. Though its sentiment of arrival can be appreciated, it implies a stasis, as if one has arrived and can finally stop. Thus, for me, "coming full circle" hints of death, completion. If—as a circle of sorts—the icon of the zero is the source from which all numbers flow, the circle of zero likewise references a fecund nothingness to which all things—perhaps indeed even the progress of numbers—return.

As a narrative indicator of the cycle of recursive life experience, perhaps it would be more exact to talk about "coming full spiral", as the precession of the equinoxes attests. Novelist Thomas Wolfe suggested you can never really go home again, and my own sojourns across the face of the planet have brought me back to familiar countries and cities and taught me that—even though coming back to the same place—the spiraling progress that forms identity as surely as it forms the nautilus shell confirms you are not the same person, not the same traveler, not really. The illusion of return, the illusion of the circle, the truth of illusion, belies a learning curve spiraling forward into time. The illusion is the shell we all carry on our very real backs.

I find myself back at the San Francisco C.G. Jung Institute at 2040 Gough Street across the street from Lafayette Park. I'm early for my seminar on the anima in film, so—after registering—I walk across the street to sit on a park bench facing the morning sun, as I used to do all those many weekend mornings during my 20s and 30s when I was a full scholar attending public programs at the Institute. It's been nearly 10 years since I've set foot in the Institute or attended a program there; what it took to draw me back was Dr. John Beebe teaching on film. And as I sit in the sun, I contemplate things.

I watch blossoms flutter off a cherry tree on a chance breeze. I contemplate the warrior spirit of blossoms. I watch a hummingbird zipping in and out among the branches of the blossoming tree and contemplate its roosting on a limb, resting, conserving the energy it must burn to fly. I contemplate the burnt energy of my own senescence sitting on this park bench in the morning sun. There remains, however, a warrior spirit within me that continues to solicit assistance from the sun and which employs human fugacity as an aesthetic weapon against the charge of inhuman time. I remember that in Nahuatl tradition the hummingbird is also a warrior for the sun whose long beak pierces the heart as surely as a spear pierces the enemy. (To find a lover, you place hummingbird feathers beneath your pillow.)

No, I don't place hummingbird feathers beneath my pillow. That wouldn't be hypoallergenic. Besides, I have had too many lovers in my life. "My body is a battlefield and I've got the scars to show." Shifting attentions—as one is wont to do in their later years—I have substituted my passions. I have chosen film. Films. Plural. My polyamory extends into celluloid. I can be loyal to no one film. I must fondle many. Eros makes handservants of the idle, they say, and apparently I have become one of those.

Screening Guy Maddin's Heart of the World and Jean Vigo's L'Atalante to state his thesis, Dr. Beebe projects the DVDs onto the Institute's white wall. This seems so apt, I have to smile to myself. Such "frenzy against the wall." I'm present not only because I love Maddin's six-minute founding myth of cinema, but because—as Girish Shambu has recently written at his eponymous site about a cinephile's accounting—I am lately drawn more to the old stories than the new ones.

I feel curiously beside myself attending this seminar; as if occupying two seats. I'm nearly embarrassed when Dr. Beebe grants me credence with his audience by advising them of The Evening Class. I'll be interviewing him soon in conjunction with the upcoming publication of his book studying the anima in film. I don't know why that seems so oddly resonant to me. I recall being in my mid-20s learning from him then and now being in my mid-50s preparing to interview him. Something about that just seems downright wondrous to me.

Michael, I await your interview with Dr. Beebe, and meanwhile, I think I'll put in a ILL request at the library for The Anima in Film--the title alone makes my ears stand up!

Ah, Michael, speak of Jungian synchronicities: I was leaving my previous comment here, not knowing that you were doing the same over at my place.

Heart of the World and L'Atalante, now that's a program. As someone said, you can't step into the same river twice.

The Maddin and Vigo films must have made quite the double feature! I wish I could have been there for the discussion afterwards.

Girish, Rob, David, thank you for stopping by to comment. I wish all three of you had been there for the discussion afterwards as well.

Michael, it does sound like it was very interesting, and those are truly two of my favorite films. Thanks for writing up the notes. Although it probably doesn't fit the "anima" themes, Last Year at Marienbad must surely tickle your Jungian brain. The memories, the dreams.

I hope you're taking advantage of the beautiful new print playing at the Castro this week. (I've seen it twice and intend to step in again if time allows.)