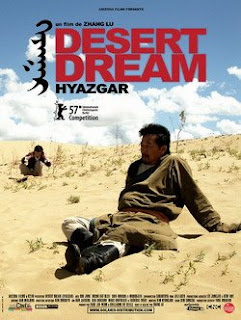 A poetic spirit of perseverance is to be sifted from Lu Zhang's Mongolian sandscape Hyazgar (Desert Dream, 2007), the follow-up to his much-acclaimed Mang zhong (Grain In Ear, 2005). Significant carryovers exist: once again, Zhang focuses on a widowed Korean woman with a young son thrust by desperate circumstances into an interaction (if not quite a relationship) with a strange man. The names of mother (Choi Soon-hee) and son (Chang-ho) remain the same as those in Grain In Ear, which Zhang—in an insightful interview with Hoo-nam JoongAng Ilbo—explains as avoiding "the stress of finding a new name." 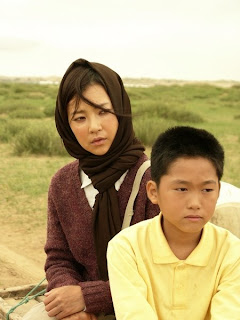 Stress avoidance aside, however, Zhang employs the Korean widow with child in tow and their refugee status as an iconic, albeit personalized, reference to division in Korea and relations with China. Widowhood, in fact, was a common occurrence during the Cultural Revolution when so many fathers were either thrown in prison or executed. Mother Choi—played by Jung Suh, known for her performances in Chang-dong Lee's Peppermint Candy; Kim Ki Duk's The Isle, Il-gon Song's Spider Forest and Cheol-su Park's Green Chair)—and her impudent son Chang-ho (Shin Dong-ho) arrive at the yurt of Hangai (Osor Bat-Ulzii) seeking food and shelter moments after his wife and daughter have left him to attend to the daughter's medical needs at a hospital in the big city. What develops between the Korean woman and her son and the Mongolian tree farmer is a tenuous cohabitation thinly guised as a surrogate family; a guise braced for survival against a desolate and formidable backdrop. 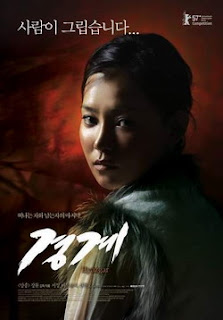 Another carryover from Grain In Ear is a somewhat self-conscious camera technique of juxtaposing the overfamiliar with the unexpected. Grain In Ear's ongoing stasis provided the final scene's effectively startling movement. Again and again in Desert Dream, Zhang employs belated left-to-right and right-to-left camera pans to follow action after characters have walked into and out of initial frame-ups (a style FIPRESCI author H. N. Narahari Rao associates with Hungarian filmmaker Miklos Jancso). This proves to be a slightly distracting technique that draws attention to itself; but, achieves culmination in the film's final 360° rotation and a concluding image that—as Variety's Russell Edwards puts it—"is designed to have auds scratching their heads wondering, 'How did they do that?' " Though I could forego that question for an answer to what it essentially means. Of note is that the only time Zhang doesn't use this panning technique is when the handheld camera follows Choi into the desert on the few times she attempts to leave Hangai's yurt compound. "People who take refuge away from their homes are different from ordinary people," Zhang explains. "To depict their emotional state I used a handheld technique."

I am clearly not informed as to political and cultural particulars that would provide a better handle on this film; but, I'm grateful the film has made me aware of that sad fact, which I hope to respectfully remedy by subsequent research. Despite my own ignorance, however, the film retains a mesmeric charisma. The landscape of the Mongolian steppes is captivating in its barren windswept beauty. 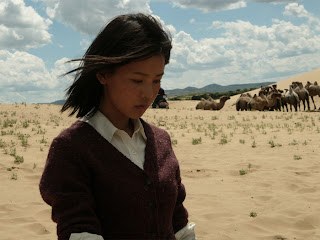 Desert Dream had its world premiere at the 2007 Berlinale along with the similarly-situated Tuya's Wedding, which ended up attracting the most attention of the two, though Dinko Tucakovic in his FIPRESCI report complimented the "slow and talented" Lu Zhang for discovering "once again the varieties of the planet that we are sharing." It wasn't until the mid-summer Osian-Cinefan Festival of Asian & Arab Cinema that it gained rightful due, awarded the Best Picture prize by an international jury comprised of directors Hala Khalil from Egypt, Wu Tianming from China, Saeed Mirza from India, Thailand's Apichatpong Weerasethakul, as well as former Cannes festival programmer Francois Da Silva. Their decision was based on "the conviction with which Zhang Lu depicts the contemporary crisis of our time. He has found the right cinematic expression to tackle a theme of such great importance." 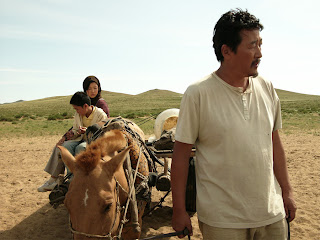 Accepting Zhang Lu's own clues, a better translation for the film's Mongolian title Hyazgar might have been "boundary", which sheds light on some of the themes Zhang is pursuing. "Nations have boundaries," he has said, "and so do people's minds. …Once the boundaries are diminished, minds can connect. A film, after all, is about states of mind." Communication—complicated by different languages and cultural customs—is in turn tempered by the humorous moments borne from culture clash. Chang-ho frequently amuses in his comments about how annoying it is that his Mongolian host doesn't speak Korean. 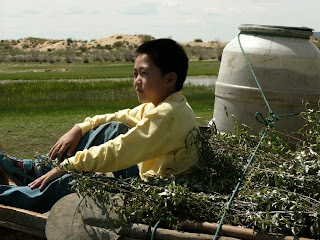 The boundaries in Desert Dream are decorated with blue prayer ribbons. Just as Hangai's self-appointed vocation is to ward off the encroaching desertification of the Mongolian steppes—a shifting boundary measured by trees that will not grow and marauding military tanks that reflect prevailing realities—so the bridge that leads the film's North Korean refugees into their new South Korean home is given voice by blue flags ruffling in the incessant winds of change. 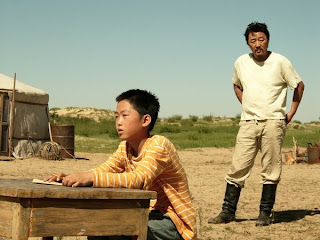 I wish I knew more the specific cultural meaning of the blue Mongolian prayer ribbons (and welcome feedback from anyone who does). I am aware that in the Lakota Sioux tradition, trees are perceived as praying figures with their branches like arms held up to the sky. It's not just that they are praying, it is that they are always praying, a difficult task, which anyone who stands with his arms uplifted can attest. Prayer ribbons essentially represent man's way of interacting with and taking part in the prayers of the tree, which by shamanic extension are the prayers of the culture. Prayer ribbons are tied to trees because life is ongoing. The tree is growing, the tree is praying. The wind moves the prayer ribbons. The relationship between that movement and the movement of the earth is related to the wind. Life is moving. When it stops it's dead. And that tree is praying every day as it moves in the wind. When you put a prayer into that prayer ribbon, it spreads it all across the earth. 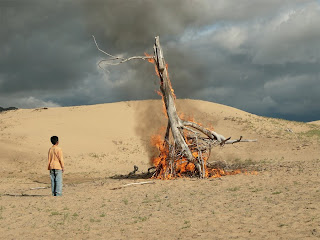 Comparable to how trees were used for burials among the Lakota, I found it telling that—before finally leaving with his mother on the long journey "home" to South Korea—Chang-ho "buries" all the dead saplings by committing them to fire. This is where the shamanic substratum of Mongolian culture has affected our own Amerindian spiritual practices and why—with a minimum of dialogue—Desert Dream achieves a consummate level of storytelling.

Here is the film's trailer, and a further video clip can be found at Vimeo (both without English subtitles, but sufficient to suggest the spirit of place and pace). The film has one more Bay Area screening in the festival this coming Saturday, March 22, 2008, 6:00PM at Berkeley's Pacific Film Archive.