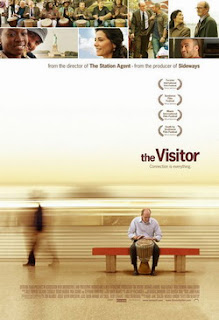 Tom McCarthy's The Visitor is an important piece of filmmaking, not because it offers remedy to the xenophobic climate dominant in the U.S.; but, because it doesn't. It eschews cinema's too-frequent indulgence of providing false palliatives which allow audiences to temporarily suffer through social ills they can leave behind while picking popcorn out of their teeth, and it scrutinizes—not without considerable compassion and a certain measure of charm—the frustrated ineffectuality of liberal-minded Americans in today's unforgiving post-9/11 climate. Anthony Kaufmann nailed it—blogging to indieWIRE from the 2007 Toronto International Film Festival—when he wrote that The Visitor is not "a movie that tries to activate its viewers, in the way that many recent political dramas have set out to do. Rather, it taps into a profound sense of weakness, a sympathy that many have for the less fortunate, but one that can only go so far." As Syrian detainee Tarek retorts to Walter Vale's feeble and empathetic assurance that he understands: "How can you? You're there and I'm here." 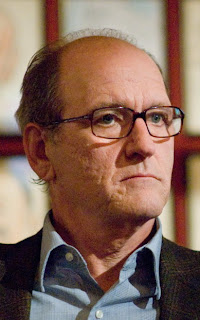 That ineffectual weakness is masterfully portrayed with astute restraint by Richard Jenkins as Connecticut professor Walter Vale in a performance that should finally give this vigilant actor name recognition to a face. His face is familiar to fans of Six Feet Under and several memorable supporting roles in recent years and—in The Visitor—it's a face resonant with exhausted, resigned despair. Life has left Walter Vale behind, widowed and perfunctorily performing academic duties, struggling to get back to his own feelings through inappropriate piano lessons. When he encounters Tarek (Haaz Sleiman), a charismatic Syrian street musician, and Tarek's guarded partner Zainab (Danai Jekesai Gurira), a Senegalese street vendor of jewelry, occupying his long-vacant Manhattan pied-à-terre, it's as if he recognizes that he is the visitor to the realm of the living. This is beautifully nuanced in two understated glances at flowers in the apartment—when he first enters the apartment he has not set foot in since the death of his wife and encounters the undocumented couple and then, later, when Tarek's mother Mouna (Hiam Abbass) takes up residence there—tell-tale signs that life has returned to an otherwise abandoned space. 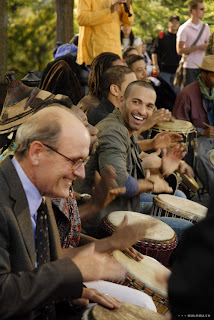 McCarthy has taken on a difficult task engendering sympathy for Walter Vale who one tenants-activist told me she liked "despite his owning an apartment in Manhattan that he doesn't occupy." Heedless politicizations aside, The Visitor excels precisely for lifting the humanity of its characters above the evident politics. What could have devolved into a tale of another white person given a life transfusion through ethnic contact—through djembe drumming no less—The Visitor achieves its commendable feat of (as Noah Cowan stated it for the TIFF program catalog) pointing the way "to a place where tolerance becomes active engagement" and to "where the dehumanizing effects of the 'War on Terror' become impossible to ignore."

Howard Feinstein at Filmmaker Magazine has suggested that The Visitor is "a multiculti isomorph of A Star Is Born" where the misfortune of the undocumented couple begets Walter Vale's epiphany. But it's an epiphany measured by the aforementioned helplessness in the face of federal bureaucracy. One of the film's most chilling scenes occurs when rage finally mounts in Walter and he is asked by detention officials "to step away from the window." Feinstein articulates this tension as well when he writes "rather than point to a bogeyman in the unjust immigration process, [McCarthy] reveals a faceless bureaucracy that begs analysis." 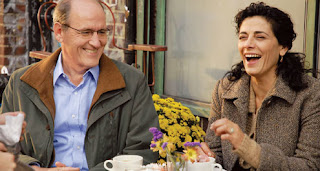 Supporting performances are pitch perfect for their precise vitality. Tarek (Haaz Sleiman) has a smile so radiant with life and optimism that it underscores the death dealing rigidity of his unjust detainment. Zainab (Danai Jekesai Gurira) reveals emotional vulnerability guised by requisite wariness. But Palestinian actress Hiam Abbass as Mouna, Tarek's mother—a woman familiar with suffering and loss—is downright incandescent in her performance. In one of the beautiful gestures of generosity noted by Cinematical's Scott Weinberg, she knowingly guides Walter through a bitter terrain of pent-up anger before making a sacrifice that will deeply affect all their lives. "Like a title by the Dardennes," Rob Davis writes for Paste Magazine, "the title of the film shifts its object intriguingly from scene to scene, and McCarthy's sensitivity to class and culture is worthy of the same Belgian masters."

Because it does not offer remedy, The Visitor draws essential focus to the need for same. In the interim, diminimized human integrity and embattled individual conscience will have to step up to speak truth to power.