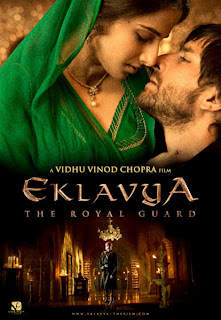 One might say that with Eklavya: The Royal Guard—India’s submission to the Foreign Language category of the Academy Awards—director Vidhu Vinod Chopra has developed the genre of the “melodharma”. Inspired by teachings on dharma from the Mahābhārata, specifically the tale of Eklavya—after whom the protagonist in Chopra’s film is named—the film embraces the symbol of the dharma wheel, which is the central motif in the national flag of India.

Dharma is, of course, complicated to define literally. Chopra seems to lean towards the concept of “duty” or, more, an intention of heart mind and soul that each individual recognizes within themselves and which is, in a sense, their true path; an intention that cannot be known or measured by others. Joseph Campbell might have called this “following your bliss”; a term which has unfortunately been caricatured to mean “doing what feels good”, which is not at all what Joe meant. I think Campbell’s original intention was more in league with a traditional understanding of dharma.

I caught up with Chopra at the Palm Springs International.

* * *
Michael Guillén: Thank you for accompanying your film to Palm Springs. It’s sumptuous in its melodrama. Could you speak to the value of using melodrama to express your story and its meditation on dharma?

Vidhu Vinod Chopra: In India—if you’ve seen Indian films—they use music and melodrama to communicate to the laity. The film was primarily made for my people, which are the people of India. The communication is very transparent in those movies. As it is, not many people in India understood or appreciated this film, unlike my other movies because [there] was already too little melodrama; there wasn’t enough melodrama for them.

Chopra: They would have liked it if the father had turned around and said, “NOOOO!” But how can you do that, you know? They thought it was too little. What is cinema finally? Cinema to me is an attempt to communicate with your people, with your audience. I’m doing a film here now [in the United States] and certainly it won’t be melodramatic because I have a certain audience in my mind. I don’t need to use melodrama to communicate my idea. But in India, I think that was essential. It was a very conscious decision to go slightly melodramatic. When you understand, when you see cinema from any other country, I think the most important thing—which, unfortunately, most Americans totally overlook—is what is it that entertains people from that country? What is the culture of that country? I mean, [in India] we all sing songs all the time. I remember the first time I fell in love with a girl, I sang a song. The first time I lost a girl, I sang a sad song. Every time. So it’s our culture. Therefore, people say, “Oh the girl is singing. But it’s not My Fair Lady. It’s not Sound of Music. How come [she’s singing]?” In cinema from any country the most important thing is to understand the culture of that country. Then it kind of fits in. So the answer—it’s a long drawn-out answer—but, why melodrama? Because that is the culture of Indian cinema.

Guillén: How in the world did you film that stampede of more than 600 camels?

Chopra: You know with great difficulty. [Laughter.] Camels don’t move. Camels are the most stubborn animals in the world. The reason I think The L.A. Times [said] this film “suggests a lost film by David Lean” is because David Lean had problems with camels and actually in Lawrence of Arabia he did something really horrible to a camel because he’d had enough of camels.

I was mad enough to conceive a shot—which is completely insane—I thought of this car stopping and then I thought of the train coming. That train was a steam engine. It had to [start] at least two miles away in order to gather a speed of 60 miles an hour, because it doesn’t take off at that speed. So just imagine this scenario. I’m standing here; the car has to stop; the camels have to come from some distance because they have to run into the frame; and I’m trying to coordinate that with a train that’s coming from two miles away. Within that frame I have to manage the train entering and then the camels entering. It’s insane! Finally, what I did is something for which I could be jailed in India or anywhere else. When nothing happened, I actually put little blasts in the ground underneath and below all over that camel area. So when the train came and it gained speed and I knew it was about to enter the frame—just in my head, about 30 seconds until the train—I [detonated] all those little blasts. And those camels ran! [Laughter.] And they ran into the frame and that’s how I got that shot.

Guillén: Your film’s palette is saturated with color. Can you speak to the importance of color in both your film and in Indian culture? 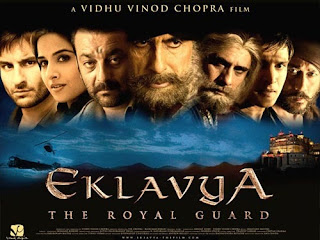 Chopra: I’m glad you asked that question because—when I went to the fort [Devigarh, situated in the Arravali Hills of Rajasthan, currently in use as a seven-star hotel]—it was very very bland. All that I wanted was red color. It was fascinating because—while I was filming—there were a couple of tourists renting rooms, from France I think, who walked in and said, “Oh, this is a beautiful red.” And I said, “It’s just cloth. It’s just red.” To me the color red—as right in the beginning of the film—implied blood and implied violence and literally, the thumb that gets cut in the opening animation sequence becomes the color of the fort. Red for me was sacrifice, violence, and the blood of Eklavya. By and large, India—and Rajasthan in particular—is a very colorful place. There are a lot of colors there. And people are colorful. It’s a very warm country and it’s not only warm because of its colors and because of its weather, but because of its people. The people are very warm. So it’s a true representation of that part of the world, except red, which was used for dramatic reasons.

When I do my storyboards, I do them in color so I know the colors I am going to use. When I was a student, Jean Luc Godard—and it stayed with me—somebody asked him, “Oh, there is so much blood in your films” and he said, “Blood? There is no blood in my films. There is just red.” That stayed with me. It’s color really.

Guillén: By contrast to the saturation of color, the scene I found most brilliant was the act of vengeance in the dark with the ghost of the screen. Could you talk a bit about what inspired that? It seemed almost like Hitchcock to me in its mounting suspense and tension.

Chopra: Thank you. Thank you very much because that’s a scene in India nobody understood. People were whistling in the theaters because they were wondering where the image had gone. [Laughter.] People at home could never figure out what went wrong in that scene. See, this is the problem I have: I am trying to communicate with two cultures. There, [they complain the film has] little melodrama and the blank screen—which you kindly appreciated—they just didn’t understand what was going on. But the inspiration for that was Hitchcock. Of course, all the kids in the film school are influenced by Hitchcock.

But to me the thing was, here was a blind man and in darkness he could see. There’s a line that’s badly translated but he says, “I can see your breath so don’t breathe. I can see it.” So the idea here was of a blind man seeing in the darkness. What I was also trying to say, which is slightly complex, is that he—through that—finally sees his own folly, which is when he tells the son in the end, “I was wrong.”

As a filmmaker I quite loved the way the sound travels all over. It’s quite interesting that. You can almost feel his footsteps moving as he comes to the center. It’s a combination of [Udaywardhan] wanting to play with cinema, the sound, and the blind man.

Guillén: What film was Uday screening?

Chopra: That’s my own film. [Laughter.] I would have had problems getting copyright from other people so that’s my own piece from the film I made before this film. So there was no copyright problem. I could use my own film and use the gun shot. All I wanted was gun shots and violence on the screen; the idea being that [Uday], the young prince, sees violence in movies that depicts his own self and he’s drunk and he’s watching these movies. The reason that film was chosen was because it was my own.

The older film shown in the background is Parinda, a very good film from Vidhu.

Although, I did not enjoy Eklavya as much. It was the first film that Vidhu had directed in 7 years so I was looking forward to it, as I have enjoyed all his previous works. But I was let down and it had nothing to do melodrama :) Although the sets were lavish and there were some magical moments in the film.

Sachin, thanks so much for stopping by to comment and offering up the title of that film. I would concede that Eklavya is Bollywood Lite, clocking in at an unbelievable 113 minutes with only one song. And I understand it was not well-received in India, making it all the more curious that it was chosen as that country's submission to the foreign language category at the Academy Awards. It strikes me as a film that is something inbetween; perhaps a purposeful transition to his U.S. film in the making?

Yes it is indeed Bollywood lite. I like that :)
When I first found out that it was the Indian entry, I was shocked. It was not even the best film that came out of Bollywood, let alone India in 2007. I have tried to justify the selection but I still don't have a firm answer.

Actually I did not know about his U.S Film, so that is an interesting point. In terms of Indian cinema, his film was also in between commercial Bollywood and independant Indian cinema, meaning while the film was different from conventional Bolly fare, it still had it's feet slightly dipped in commercial tales.

Looking forward to your interviews/write-ups about other foreign nominated films.