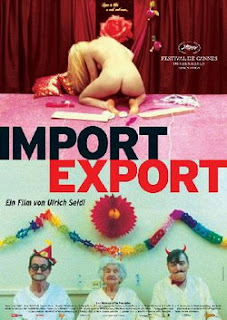 Ulrich Seidl's Import Export is a frustrating exercise in misery. For all its prolonged exposure to its two unrelated main characters, we don't get too close or feel enough sympathy for them. A young single mother in Ukraine is paid only 30% of her salary as a nurse in a bleak hospital, [which] she has to trudge through the snow in her high-heeled boots to reach. (An early disturbing scene features a wheezing baby.) After a demeaning stint as a webcam sex worker, her decision to seek work in Vienna downgrades her to maid in a private house, then cleaning lady at a geriatric hospital, where her compassionate instincts incur the rage of a jealous nurse.

On a different narrative skein, an aimless young Austrian man is fired from his security-guard job and reluctantly joins his distasteful stepfather in delivering obsolete pinball and gumball machines to Slovakia and Ukraine. I was often distracted by Ed Lachman (I'm Not There)'s camera, which much of the time chooses to sit planted in front of solitary characters in central mid-distance nearly overwhelmed by their deep, gloomy surroundings. Degradation is rubbed into every scene to the point of disgust. Early on we get that Austria and Ukraine are increasingly coming to resemble each other and that neither provides a decent living wage for its young citizens wherever they end up. It's a realization that doesn't need to have indignity after indignity—especially of hapless peripheral characters not meaningfully connected to the protagonists—piled onto it. 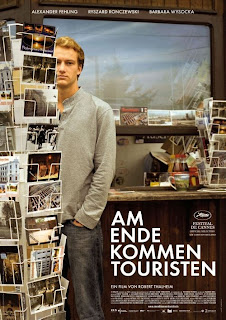 Robert Thalheim's And Along Come Tourists (Am Ende Kommen Touristen), while using a more conventional narrative structure than Import Export, understates all of its ambitious implications about genocide, nationalism, historical memory, the nature of transnational work and the tourist industry, and still manages to develop great sympathy for all of its characters. Another aimless young man, this time a German named Sven, decides on civilian service rather than military for his compulsory one-year civil obligation. Although he had hoped for a gig in Amsterdam, instead he's posted to Auschwitz, the former Nazi death camp and now a flourishing tourist attraction. Even worse, he's assigned to look after a grouchy octogenarian former prisoner who insists on staying on and giving eyewitness accounts of his experience to youth groups who can barely stifle their yawns. He also annoys the bureaucratic Auschwitz curators, who think he's ruining—by helping to restore—the suitcases that prisoners were forced to abandon when they entered the camp. Everything about his work reminds Sven of the Holocaust, while the reality of present-day life in the Polish town—not knowing the language, falling in love with a Polish girl, dealing with anti-German sentiment, organizing a memorial donated by a German chemical plant—casts shadows on his attitudes and actions. It's a subtle, supple story with deep-reaching roots. 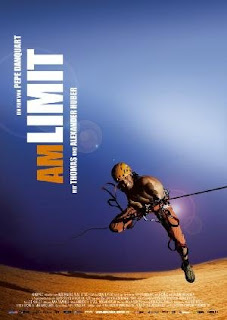 Pepe Danquart's To the Limit (Am Limit)—not to be confused with the 1995 Anna Nicole Smith caper movie—documents the efforts of two brothers, Alexander and Thomas Huber, to break the speed-climbing record for "The Nose" of Yosemite's El Capitan. To get some idea of how fast these guys go, consider that 3-5 days is the average length while the record they're trying to break is nearly 3 hours. This involves day after day of painful trials before the actual attempt. And "painful" is a ludicrous understatement: At their speed, the slightest misstep or bad handhold could mean a plunge of 3,000 feet—tied together. The brothers' articulate but not overwordy dialogue, as well as contributions from other climbers presumably well-known in the field, reveals what it takes to face one's greatest fears, both physical and emotional, and break through to peace within oneself.