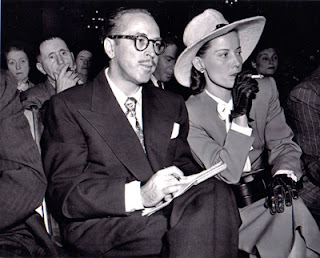 With arms akimbo and legs planted firmly apart, James Ellroy delivered a hardboiled (and hilarious!) introduction to Noir City's doublebill of Gun Crazy (1950) and The Prowler (1951), both written by the infamously-blacklisted screenwriter Dalton Trumbo. Not only is Trumbo the uncredited screenwriter on The Prowler—screened at Noir City in a sprarkling new restoration print—but his voice can be heard as the voice of John Gilvray, the night-time radio DJ.

Ellroy explains that he is to Los Angeles what Eddie Muller is to San Francisco. He is Robert Ryan, the tall, imperiously goodlooking psychopath to Eddie Muller's sweaty, evil opportunist Edmund O'Brien. He incants: 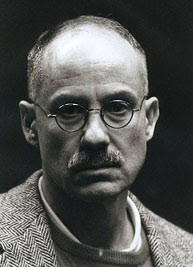 Good evening peepers, prowlers, pederasts, panty-sniffers, punks and pimps. I'm James Ellroy, the demon dog, the foul owl with the death growl, the white knight of the far right, and the slick trick with the donkey dick. I'm the author of 16 books, masterpieces all; they precede all my future masterpieces. These books will leave you reamed, steamed and drycleaned, tie-dyed, swept to the side, true-blued, tattooed and bah fongooed. These are books for the whole fuckin' family, if the name of your family is the Manson Family.

T.S. Eliot wrote if you came this way, starting from anywhere, at any time and in any season, you'd have to cross such a notion. You are not here to instruct or sell or to inform curiosity or to carry a report. You are here to kneel where prayer has been proven valid and for me, James Ellroy, the death dog of American literature, prayer has been proven valid at one spot and one spot only: L.A., my smog-bound fatherland where I was born at the dead-cold center of the film noir era.

Thank you for coming. I realize you had options tonight. You could have stayed home and attended to your sex lives and your drug habits and your dubious San Francisco politics; but, you didn't! You came here to see three great movies, Eddie Muller and me because you love noir and you know what the central theme of film noir is: you're fucked. You just met a woman. You're two seconds away from your most redemptive love and the greatest sex of your life; but, within four short weeks, you will be railroaded into the gas chamber at San Francisco's San Quentin prison, framed for a crime that you did not commit. And as the pellets drop in the sulphuric acid, your last grateful thought will be of her because it's film noir and you're fucked.

It's 1934 and you're socially conscious. You're left. You're queer. You're San Francisco and you go to a commie meeting. Then you turn straight and you get a great great studio job as a screenwriter (pant, pant, pant) but your name's on a list and 24 years later some flat-topped fascist grey-suited fed pulls you in just as you've met the woman and—in four short weeks—you're framed for a crime you did not commit. You didn't even get laid and—as the pellets drop—your last grateful thought will be of her because it's film noir and you're fucked, with such great, surpassing, insolent, gorgeous style. 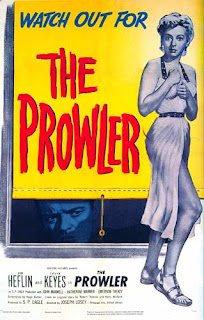 In 1951, Joseph Losey and Dalton Trumbo struck a masterpiece of sexual creepiness, institutional corruption and suffocating, ugly passion. You will need antidepressants, booze, drugs and bleak anonymous sex after you see this movie and—believe me—you are in the perfect city to find that! The great Dalton Trumbo wrote it, the great Joseph Losey directed it, Evelyn Keyes and Van Heflin in The Prowler.

* * *
Eddie Muller then took stage and shouted that—if anyone buys one of his books—he would promise to sign it. He contextualized that Ellroy had told him that The Prowler was his favorite movie and—when it came time to hit up people for hard money to get the film restored—"guess who I went to first?" Ellroy brazenly milked his applause. But Muller qualified that it was not only Ellroy's financial backing but all the people in the audience and all the tickets sold at Noir City that made up the bulk of the war chest that made the restoration print possible.

At last year's Noir City festival, on the second night, they were forced to screen a 16mm print of Cry Danger with Dick Erdman present as a guest, and it was very disappointing that no 35mm prints of that film existed. One year later, Muller is delighted to announce that his dear friends at the UCLA Film and Television Archive have advised him that the elements for Cry Danger have now been found and soon Noir City will be seeing a restored 35mm print. Muller introduced Todd Weiner in the audience, his point man at the UCLA Film and Television Archive, as well as Nancy Mizell, the woman who spearheaded the restoration of The Prowler and managed it through to its completion. With added pride, Eddie announced that Christopher Trumbo was in the audience representing his father.

"We are here tonight to honor all the writers," Muller added, "but specifically one writer. You will not see his name appear on either of the movies that you will see tonight. That is because he was blacklisted at the height of his career and he had to do all this work using fronts. I'm going to put him in a tie with Ben Hecht as my favorite screenwriter of all time."

I had the great opportunity to meet James Ellroy twice, in 1990 and 1995. What a writer and what a character !

I am still waiting for the enormous amount of sex that the purchase of his books has promised....

Heh. Whereas some of us are still recovering from all that....