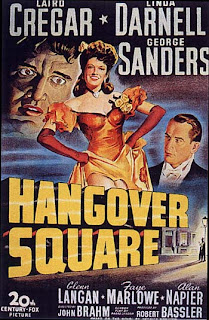 Matt Sussman's write up of Noir City for the San Francisco Bay Guardian is some of his most elegant writing to date and a seminal read to grasp one of the main undercurrents in this year's program lineup. Astutely entitled "Noir or Not?", Matt's overview discerns: "Perhaps more than past incarnations, Noir City 6 makes a case for film noir as a set of stylistic conventions—or, alternately, for noir as an inspired malaise that permeates a film like stale cigarette smoke—rather than something hard-and-fast that sports a time stamp."

Eddie Muller pleads a similar case. "As many of you know who have attended this festival over the years, my definition of film noir can be somewhat elastic. It is not so elastic as to include The Poseidon Adventure." Muller was referring to the Castro Theatre's marquee, freshly-painted to its '70s grandeur and dressed specifically for the evening filming of Gus Van Sant's Milk. While waiting in line, Noir City aficionados were treated to Sean Penn and James Franco re-enacting a '70s police raid on the resurrected Toad Hall; a gay bar that—though re-situated on Castro Street for filming—remains fixed in my memory as a favorite watering hole after getting off work as a waiter at Fanny's Cabaret during what is now termed "the Castro Fluorescence". Watching the re-enacted fracas of police and gays in front of Toad Hall—endeavored four or five times—reminded me that you have several takes with filmmaking and only one shot with true history. 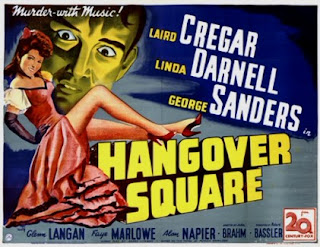 I feel blessed and forever changed for having taken part in these events when they occurred and heartened to know that our struggle for liberation has not come to naught. Young queers have inherited what strides were made by their elder brethren and—as fickle as Abraham Maslow's hierarchy of needs might be—their main concern at present is that, hopefully, Milk will at least be a good movie. I did make a group of onlookers laugh by commenting, "Oh no, this is historically inaccurate." "How so?" one guy bit. "The cops are much too thin," I smiled.

"I hope none of you were confused by the marquee out in front," Muller apologized. "Tonight's program is, in fact, sponsored by 20th Century Fox, which in the past several years has put out a terrific line of Fox film noir classics on DVD. 20th Century Fox is one of the studios that—I'm happy to say—has done a terrific job of maintaining their library and not letting films deteriorate. I'm not sure they understand what film noir actually is, but they do know not to let the films deteriorate. I'm very happy that they are on board with the Noir City Film Festival; they've been great supporters of ours for the last several years and that's all a very very good thing. 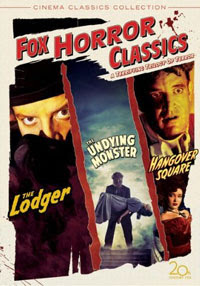 "The film that we're going to start off with tonight—just to show you how difficult it sometimes is to figure out what qualifies as noir and what does not—I was waiting for Hangover Square to appear in the Fox film noir series; but, somebody in charge at Fox felt that Hangover Square was a horror film and not a film noir movie so it was released separately on DVD as part of the brand-new Fox Horror Classics series of DVDs. The reason why I will stress to you that I think Hangover Square really is a film noir and not a horror film is that it's based on a book, a novel by Patrick Hamilton, that is a definitive noir written in 1941, pre-Jim Thompson's The Killer Inside of Me and it is very much an inside look at the mind of a killer.

"[Hamilton's] story of Hangover Square is set in London in 1939. The protagonist is not, in fact, a concert pianist. It's really a very noir novel, but when Fox bought the rights to the novel and decided to turn it into a film, somehow it ended up being set in London in 1903 instead. I don't really get it; but, this is the way it works in Hollywood. Laird Cregar, Barré Lyndon (who wrote the screenplay for this film) and John Brahm, the director, had made a film called The Lodger that was very successful for 20th Century Fox. The Lodger was an adaptation, if you will, of the Jack the Ripper saga. They had great success with that so they thought, 'Let's do that, again!'—the time-honored Hollywood tradition—so they took Patrick Hamilton's novel that had been set in 1939 London and decided they would make it something else: a period costume drama.

"…The main thing about this film that I wanted to tell you about is the star Laird Cregar, who was one of the most unique and formidable actors of the early 1940s. If you're familiar with his work—I Wake Up Screaming and The Lodger—he's very unique; he's a handsome heavy. He was from Pennsylvania, came out to Hollywood, desperately wanted to be an actor, always had weight problems and didn't really fit the profile of the handsome leading man. He got Hollywood's attention by doing what we now call "a Billy Bob": he invested his own money into putting on a stage play in a theatre on Hollywood Boulevard where he did a one-man show as Oscar Wilde. It became a sensation in Hollywood and everybody had to go see Laird Cregar do this performance. That's what got him his contract with 20th Century Fox. But he was so unusual and unique that he was not going to be leading man material. They found a niche for him as a sophisticated heavy in the movies. Literally, he was a heavy, weighing upwards of 300 pounds. 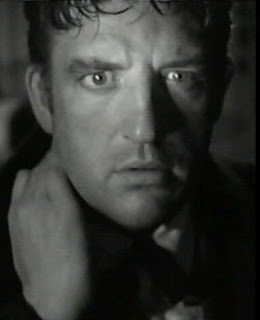 "Hangover Square was tailored for him in the wake of his success in The Lodger. Cregar was a big man with a hidden Tyrone Power lurking within him. I don't mean that facetiously. That's really the way he thought of himself. He desperately wanted to be a romantic leading man. When he made this picture, he went on a crash diet to lose all his weight. This diet was so drastic that it actually induced a heart attack and he died at 29 years of age. That ended his career two months before Hangover Square was released. That's noir. [As a noir trivia note, Cregar's death lost him a role he was being groomed for; that of Waldo Lydecker in Laura. The part went to Clifton Webb upon Cregar's death.] 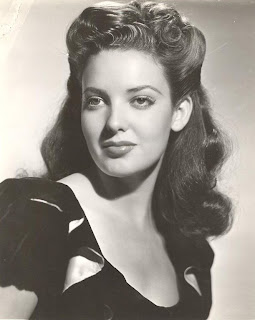 "[Hangover Square] is exceptional and—as we noted in the program—we're broadening the definition of noir and seeing how the audience reacts. We're stretching things to get out of the rain-slick streets and the mid-20th century American metropolis to see what else is out there in this world of noir. Hangover Square definitely qualifies. You'll also get to see one of my favorite gals in noir, Linda Darnell. One of the great features of this film—besides the amazing Joseph LaShelle cinematography—is one of Bernard Herrmann's greatest scores. The film builds to the concerto macabre.

"Those of you who might have been here on Saturday night to see The Prowler and Gun Crazy and a little film called The Grand Inquisitor, I want you to know that—when we made that film with Marsha Hunt—it was so amazingly delightful to work with her because when you'd break for lunch, you'd be scarfing down food and Marsha would tell you stories about when Orson Welles came over for dinner and how 'Benny' (Bernard Herrmann) lived down the block from her and they were really good friends. He would come over and cry on her shoulder about how the studios didn't understand his genius.

"I'm really excited about showing Hangover Square and broadening the definition of noir. We have a beautiful print from 20th Century Fox to show you tonight. On March 11, they release the next wave—as they call it—in their DVD series. You tell me if Daisy Kenyon and Dangerous Crossing and Black Widow are noir or not—I don't really know—but, we love 20th Century Fox regardless!"

After Hangover Square screened, Muller returned to the Castro stage and admitted, "I don't know about you, but I don't really care about the definition of noir. I just wanted to see the concerto macabre on this screen. That was great!" 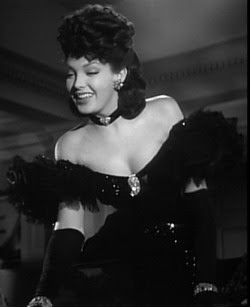 Adding an extra "noir note"—which Muller didn't want to discuss preceding Hangover Square—"As weird as it was discussing poor Laird Cregar's demise, how bizarre is it," Muller queried, "that Linda Darnell would actually die in a fire in real life [as she does in the film]? Completely freakish at only 40 years of age. She was visiting friends in a suburb of Chicago and fell asleep smoking a cigarette while watching her own movie Stardust on TV. Quite tragic."

Reiterating what he intimated earlier in the evening, Muller professed to not knowing what Fox is doing releasing some of these movies as film noir. Dangerous Crossing, the next film in the program, is not a movie that Muller under normal circumstances would classify as a film noir. "If you read a lot of noir literature," he said, "as well as watch a lot of noir movies, you clearly understand the distinction between certain writers who do this kind of thing—Jim Thompson, David Goodis, Dashiell Hammett, Cornell Woolrich, Charles Willeford—these guys who write noir fiction. The author of Dangerous Crossing—John Dickson Carr—is never put in this group of writers. He is a specialist in what is known in the mystery field as the 'locked room mystery'. What distinguishes this type of fiction from noir fiction is that it's extremely plot-heavy. It's a puzzle movie. Something absolutely unbelievable transpires and the genius of the writing is in explaining how this could possibly have happened. Generally these stories unfold with a great premise and then there's 40 pages at the end of expository stuff explaining exactly how it happened. It's not the greatest climax in the world; like Simon Oakland at the end of Psycho standing there explaining the whole plot to you, right? Be that as it may, it does take a certain amount of genius to write these things and John Dickson Carr was legendary. He is considered to be the master of the locked room mystery. A novel he wrote called The Three Coffins is generally considered to be the finest example of the locked room mystery ever written.

"Dangerous Crossing was originally a radio play in Britain called 'Cabin B-13' that was created in 1943 and then it was transformed into a stage play and by 1953, 10 years later, the property was owned by 20th Century Fox and they decided to adapt it as a film starring Michael Rennie and Jeanne Crain. Jeanne Crain was a very popular actress of her time. She was one of those strange inbetween performers who didn't extend her charisma into the later decade. She's somewhat of a forgotten actress; but, she was hugely popular at this point and was one of 20th Century Fox's biggest stars. If you know Leave Her to Heaven with Gene Tierney, she was the 'other' woman."

With "noir or not" becoming the presiding theme of this year's Noir City, Muller encouraged his audience to offer feedback and to stop him in the theatre lobby to share opinions. "That's why this stuff remains so incredibly popular," he emphasized, "because we can actually stand there and argue about whether Noir City should be showing this or not."

Thank you for this fly-on-the-wall report. For a film noir fan in the Antipodes it is a great insight into the event.

My hope exactly! Thanks for confirming.

Oh, yes, I know: Horror is so déclassé. We have to make sure that nothing we like would ever fall into that category. Noir is SO much more intellectual and hip!