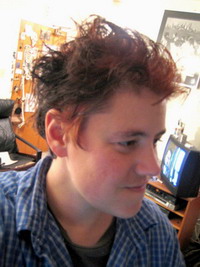 It's with great pride that I announce that—partly due to his conversation with me here on The Evening Class—filmmaker Jed Rosenthal Bell has been offered a column on the newly-launched QueerCity.com. His first write-up is an appreciation of Omar Little, the "criminal king" of HBO's The Wire. "Omar represents a new concept for TV," Jed writes, "the hard homo hero. Even better, his queerness is as relevant, as built-in to his character, and as causally, structurally related to all the happenings in the world of The Wire as every other thing in this beautifully complicated drama."
Posted by Michael Guillen at 12/20/2006 02:11:00 PM