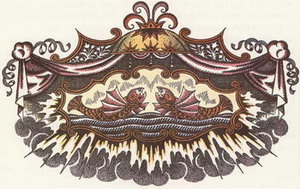 Veteran director Doris Dörrie's Der Fischer Und Seine Frau (The Fisherman and His Wife) reveals its fairy tale moral in its subtitle: Warum frauen nie genug bekommen (Why Women Never Get Enough). Or as beleaguered husband Otto (Christian Ulmen) comes to understand about his ambitious wife Ida (Alexandra Maria Lara): "A sacrifice for women is a pause between two wishes."

Where Matthias Glasner's The Free Will plunges its audiences into the cold depths of the sea, Doris Dörrie allows her audience access to sparkling sunlight on frothy wavecaps. Her rendition of this classic Grimms Brothers fairy tale is insouciant and irreverent and, most importantly, thoroughly entertaining. This pop parable casts a couple of wisecracking fish in an aquarium as narrators who inform us they were once a man and a woman who—after three years of marriage—stopped loving each other. That failure of communication transformed them into tategoi ("maybe fish") in a distant pond. Their spell can only be broken by a couple who remain in love after three years. Thus their keen narrative interest in Ida and Otto.

Paraphrasing the festival program capsule, Dörrie's tale begins when Ida, a twenty-something fashion designer, backpacking through Japan, meets Otto (Variety's Eddie Cockrell describes him as "a kind of German version of Paul Giamatti") and studly Leo, the "Flying Fish Doctors." Otto and Leo are scouting for koi fish to resell to rich German collectors, and Ida tags along. Naturally, an erotic triangulation ensues in which both men are attracted to the go-getting young Ida, but her aggressive tendencies favor passive Otto over confident Leo. She even proposes to Otto. Soon, they celebrate their budding love in an avant-garde styled Japanese marriage ceremony that gives Björk and Matthew Barney a run for their money before settling into domesticity in Munich. Otto seems perfectly content to be a house husband, minding a baby and his koi in their cramped quarters, while Ida longs for more. A bigger house. A yard for the kid. A room of her own. Her own fashion line. Just as Ida and Otto's meet cute is a rapid infatuation of two perfect strangers falling in love, I was reminded of Coco Chanel's comment that only perfect strangers can fall in love because only strangers are perfect. That Ida then emulates Coco Chanel makes perfect sense. Beginning with scarves colorfully knitted to look like koi fish, Ida progresses to stunning outfits that make a big splash all the way to Japan. Ida's ambition and self-made success, writ large in a riot of color, estrange her from husband and child and seems to ask if modern woman can dare to want it all? Our wisecracking fish narrators begin to suspect their hopes will be dashed as Ida and Otto begin to fall out of love with each other before the three-year deadline. It's miserable to never have what you want and to never want what you have.

Dörrie is hardly coy about her visual and verbal puns. Koi, we are reminded, means both "fish" and "love" in Japanese. And the film's opening montage superimposes schools of fishes onto urban traffic. Later, when Otto becomes outraged that Ida is painting their apartment koi-orange, he visits his hippie mother who—you guessed it—lives in a koi-orange apartment. Hardly subtle but wholly humorous.

The Fisherman and His Wife is enrichened by Rainer Klausmann's crisp lensing and saturated with Katharina Ost's bold, colorful costumes. The film's music is eclectic, ranging from rancherias to The Talking Heads, frequently subtexting events on the screen to comic effect. The one song noticeably absent being The Marvellettes' "Too Many Fish In The Sea." There's short ones, tall ones, and—in this case—fun ones.

Oooh, I'll rather see this than Free Will then.

Happy New Year to you too, dude. Thanks for being such a faithful reader.