Beware the Jabberwock, my son. You have to be very careful of the things you say or write about other people, as Jonathan Marlow reminded me introducing his second Cabinet of Curiosities at the Yerba Buena Center for the Arts, where he brought up to his capacity audience that I had called him an "idiot" in my Evening Class write-up. In my own defense, I must qualify that I called him a "magnanimous idiot." In the vast terrain of idiocy, there are significant distinctions.

This time around I want to be very careful that I don't blather out descriptions that might be misconstrued. Jonathan Marlow is, quite simply, a curatorial magician. He pulls things out of his cabinet of curiosities with the confident delight of a true impresario. He teaches as he entertains and I, for one, am most grateful. 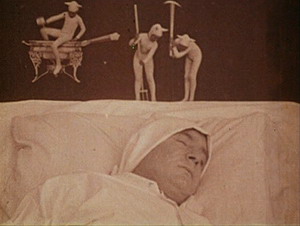 His Cabinet's "Dreams and Nightmares edition" included Edwin Stanton Porter's Dream Of A Rarebit Fiend (1906), for which both Thom Ryan and John Canemaker had prepared me; Thom with his wonderful Film of the Year contribution to the Avant-Garde Blogathon earlier this year (wherein he includes a recipe for Welsh Rarebit), and John with his commentary on Winsor McKay's popular comic strip "Dream of the Rarebit Fiend" (wherein an excess of food and drink leads to fantastic if not nightmarish visions). Porter's swish-pan pendulumatics quite effectively simulate the "whirlies" of drunken excess as our overwhelmed protagonist clings to a lamp post for dear life. Later, in his dream, he once again hangs on, this time to his bed which has taken flight over a sleeping city. Andre Soares reports at Alternative Film Guide that Porter's Dream Of A Rarebit Fiend was honored just the other night by the Academy of Motion Picture Arts and Sciences in their centenary tribute to the films of 1906. Marlow's inclusion of this piece therefore proves timely and an amazing testament to the still-entertaining longevity of a film that is 100 years old. 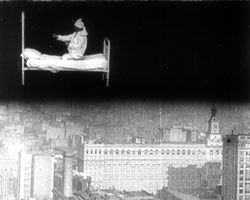 Next was Walerian Browczyk and Chris Marker's Les Astronautes / The Astronauts (1959), an intriguing mix of collage and stop-action animation that sent us on a surreal flight in the most makeshift of aircraft.

I had caught Guy Maddin's 1995 Odilon Redon (or The Eye Like A Strange Balloon Mounts Towards Infinity) earlier this year at the 49th San Francisco International Film Festival; but, it's always a pleasure to experience Maddin's quirky universe, which pays homage to the cinematic strategems of yesteryear. 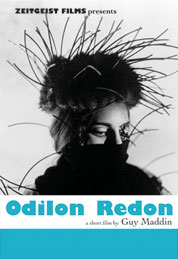 Jonathan advised that Carl Theodor Dreyer's De Nåede Færgen / They Caught The Ferry (1948) was intended for the original Cabinet of Curiosities but was cut. It was almost going to be cut from this program as well; but, fortunately, Jonathan reconsidered. A cautionary admonition of how swiftly we rush to our fates, Dreyer's piece reminded me of the first Cabinet's A Drop Too Much (1954) by Břetislav Pojar and Jiří Trnka. Jonathan reveals that there appears to be a history of animated scenarios of fatal vehicular accidents. The DMV should commission a program.

Jiří Trnka was represented this go-round by his ruthlessly clever Ruka / The Hand (1965) where a poor potter, fond of his potted plant, suffers the authoritorial caprices of a hand, ranging from the totalitarian fist to the perversely seductive and transvestized finger dance (amazing what a lace glove will bring out in a hand). I'm tempted to describe this as the first true piece of "digital" animation. Then again, maybe I won't.

My favorite piece of the program was Zbigniew Rybczynski's Nowa Ksiazka / New Book (1975), a stunning tour-de-force of split-screen narrative relativity. Directly opposed to any kind of soporific venture, New Book agitates the mind, keeping it alert and observant, and ultimately tickled when all the various perspectives reach a consummate hiccough. This film is like 12 films in one and deserves to be seen at least 12 times. I look forward to the next 11 and thank Jonathan for the first.

Jan Švankmajer's surreal delights were on hand with Rakvickarna / The Coffin House (1966) and Yuri Norstein—who was my favorite from the last program—was offered up by way of The Fox & The Hare (1973), where a shrewish she-fox whose ice house has melted usurps the domicile of a poor rabbit until he is rescued by a gallant rooster.

Finally, as a tip of the hat to the cusp of the holiday season, Jonathan presented Karel Zeman's Vánocní Sen / The Christmas Dream (1946) wherein the compensatory nature of dreams is poignantly examined.

On top of all these treasures, Jonathan Marlow—via the generous auspices of Greencine—gave each and every member of his audience a dvd Christmas present! I received Michael Winterbottom's Nine Songs.
Posted by Michael Guillen at 12/08/2006 04:13:00 PM

I really should have gone to this. Sounds like a delightful selection of shorts, most of which I've never seen before.

I was fully expecting to see you there and was surprised you were a no-show. But, believe me, I perfectly understand the gap between what we want to see and what we accomplish seeing.

I meant to mention that you'd called me an idiot in the most positive of senses. No harm intended and none taken what-so-ever! Regardless, I was quite pleased to see you there again. Pleased to read that you fully enjoyed the show; I wager that there will be others in the series next year. Meanwhile, greetings from Australia!