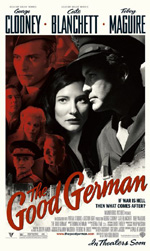 I knew I was in trouble when Eddie Muller (the "Czar of Noir")—introducing an advance screening of The Good German to his word of mouth audience—admitted to having seen the film last week in Los Angeles and synopsized it as: "It's … interesting." Those two words with a pause inbetween are as good as hanging a funeral wreath on the front door. He then proceeded to tell us that—if we wanted to see "real" noir—we should come to his upcoming Noir City in late January. I guess I can't blame Muller for some shameless self-promotion when Warner Brothers didn't pay him a cent to introduce the piece. You get what you pay for, huh? And I'll certainly take him up on his invitation.

Dave Hudson and The Greencine Daily have done a good job of shepherding the consensual disappointment into one entry. If you're really interested in reading why other film writers feel the film has failed, go there. Otherwise, here's my two cents.

First, my druthers would be that all the money spent into replicating a film noir movie be put into restoring some film noir classics. Period. Enough with the stylistic homages that don't quite work already and all that good money thrown after bad.

Second, as the movie started, it had that faint edge of irreality seen in Sky Captain and the World of Tomorrow, all the trappings and touches painfully captured, without anyone thinking to invest a soul. And no amount of vintage footage will cobble a soul together without all the local villagers screaming, "Kill Frankensoul! Kill the monster." Which genre was Soderbergh really trying to replicate here?

Third, I am far from being a prude (I just interviewed fucking Guillermo Del Toro for Chrissake!) but was it really necessary to insert all the crude language into The Good German? If the film was to achieve any kind of true homage, how could all these "fuck a ducks" help? I don't recall a single "fuck a duck" in any of my favorite noir films. Is there a "fuck a duck" in Casablanca? So, okay, this was a postmodern homage? Yeah, right. Okay, sure. I'm not saying they didn't really cuss like this in 1942; but, I just don't remember hearing this kind of language in previous film noir features. Somebody correct me, please, so I don't remain irritated about that poor violated duck.

Fourth, I didn't even know this was a Soderbergh film; I hadn't read any reviews or heard any buzz. I went because George Clooney was in it and—even though he is possibly the most handsome leading man alive—he wasn't convincingly in love with Cate Blanchett; he was irritated with her. All through the movie. Right to the end. Convincingly irritated. Cate, on the other hand, was the closest to being anything accurate in this film. The woman is a wonder. Black dye-job, black contacts, thick-lipped fake accents and all. She could do a Fruit of the Loom underwear ad and I would love her. Come to think of it: didn't she do a Fruit of the Loom underwear ad this year? And isn't it also in the running for Oscar consideration?

So there you have it. Style over substance. A film with no soul. Lots of duck fucking. An unconvincing love affair and not near enough shadows to hide a film that is … well … interesting. To say the very least.
Posted by Michael Guillen at 12/20/2006 11:27:00 PM

I agree completely (and so, it seems, does the vast majority of critics). I had the same problem with the modern R-rated content, too. It's not prudish at all to wish Soderbergh had found a way to insinuate adult content the way Curtiz and his contemporaries were forced to; he wants to have his cake and eat it too, and it just plain doesn't work.

I like how you phrase that: "insinuate adult content." It just seemed so sloppy to me not to even try.

You know how, before the screening started, I said something about how I sometimes prefer an ambitious film that fails majestically than one that's "merely" good? In case you were wondering, I want to put down for the record that this was NOT one of those times. The Good German had me LONGING for a truly "good" film. Or even a mediocre one.

Brian, I'm glad you weighed in. I was wondering what you thought. And thank you for shushing the woman behind us who insisted on crinkling cellophane a good 45 minutes through the movie! Unbelievable. I guess, since it was a free WOM screening, she felt she could leave her manners back at the barn.

I haven't seen the film, so can't weigh in much, but:

When I first heard about Soderbergh making The Good German, I couldn't wrap my head around why he'd chosen to do it in this 1940s style (and, as you say, what's the point of advertising the fact you're using old cameras when people are constantly fucking ducks?). When a filmmaker decides to try his or her hand at digital video, or does something like von Trier's dogme95, or makes Far from Heaven, at least there's a reason for it: budget, political commentary, ideology, whatever. With The Good German, I don't see a reason. By limiting himself to 1940s equipment (did he use old film stock, too?), is Soderbergh mocking Hollywood in the 1940s, trying to re-popularize it?

Hmmmm. I can't say he's "mocking" it. I think he genuinely was trying to create some kind of homage, but it didn't come off as respectful as it might. If his aim was to "re-popularize" the genre, he has failed miserably.