BEYOND THE CALL—UNAFF Q&A With Director Adrian Belic 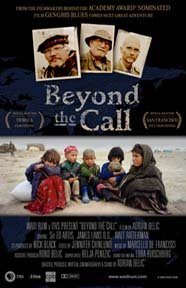 Adrian Belic's documentary Beyond The Call had its official world premiere at the Tribeca Film Festival and screened shortly thereafter at the 49th San Francisco International Film Festival earlier this year, but, I caught it when it was featured at the United Nations Association Film Festival at the Roxie Film Center screening where Adrian was present to answer questions afterwards.

Introduced by UNAFF executive director Jasmina Bojic and asked about the current status of the three members of Knightsbridge International, Adrian responded that Ed Artis had just returned from the southern Philippines, where he brought in another $6,000,000 worth of medicine. Walt Ratterman just got out of Tajikistan, recently was in Northern Pakistan and is heading back into Burma to deliver medicines and solar panels, and Jim Laws was "doing his doctor stuff in Dayton, Ohio."

Bojic incorporated Beyond The Call's poster of the Afghanistan children sitting on the bags of grain as the presiding graphic for UNAFF and—admitting he was deeply flattered that UNAFF had used the photograph for their program cover—Adrian advised that the photograph was taken October 16, 17, or 18, 2001, in Afghanistan when Ed and Walt were delivering food and medicine. He emphasized that the U.S. bombing filmed in the documentary was no less than 8 kilometers away from where these children were photographed resting on the bags of wheat.

I expressed my fascination with Adrian's participation in this relief-aid process via his documentary coverage and asked how filming these individuals had affected him individually. Adrian expressed that he had first met them in 1999, when he first sat down and interviewed Ed; ancient history for the young people in the audience since it harkened back to the last millennium and the Clinton administration, "when traveling around the planet was party time as an American, relatively speaking." Things have, of course, changed dramatically since then. Noting that his appearance (long hair, waxed moustache) evidenced he was not military, there were nonetheless many times in 2001, 2002, 2003 when he went into Iraq and 2004 when he traveled overseas shooting and came back that he'd be sitting in a bar listening to Americans bitch that their food was cold, or they couldn't find parking, or the valet was slow, and he'd look over and there would be another person who was obviously military who was likewise assessing the complaints of these Americans who seemed all the more bizarre after what they had experienced in their military service. Adrian found it interesting that he found himself commiserating with these soldiers. Admitting it was difficult to talk about these insights, Adrian offered that his experience had taught him that "killing people is not the way to get people to like you." Jim and Walt had taught him not to get involved in the politics of the people they were helping, "don't get into the God business, don't make any money off of them, and bring a gift."

It was shocking for Adrian to travel around the world and watch these small groups of people providing relief-aid and then return to the indifferent belligerence of most people in the States. Anyone who has traveled outside of the United States in the last five years, can't help but notice attitudinal developments. It used to be the Western perspective and everyone else; but, now, it's the American perspective and everyone else. As a European citizen with dual citizenship, he can live in Europe any time he wants but he chooses to live in the U.S. because he still believes it's the best country on the planet even though it has a lot of problems at the moment. Dealing with Ed, Walt and Jim inspired Adrian. He wanted to make his film because when he met Ed and learned about what they did and how they did it, he felt they embodied the greatness of this country and the greatness of individuals in this country. He had no idea when he began the project how poignant these stories would become. Initially, six years ago, he thought the story would be a fun story. Little did he know that all this time later people seeing the film would come up to him and say, "Hey, thanks man, I haven't seen something good about America in a long time." He didn't plan on making a film that showed anything good about America—he just wanted to show something good about individuals—but, things have become so polarized and complex that the film has produced unexpected effects. Living the way he has for the last six years has been complex and has shown him that things are not all good and evil.

Adrian solicited further criticism. He truly wanted to know if anyone thought these guys were assholes because a couple of people had left the screening 10 minutes or so before it ended and had written down comments that they considered the subjects of Adrian's documentary to be a bunch of missionary neocolonialists, which is something he'd never considered. One fellow in the audience admitted that he could understand that negative reaction. He had felt himself feeling those things, especially as the film started, and even somewhat afterwards. He could personally acknowledge the good these men were doing and know he himself would never have the balls to do the same; but, at the same time, those men had all the bad things that come with balls, like the ridiculous train and all that. Conceding it was the challenge to the filmmaker not to judge what he was filming, just to record it, to look at it, he was nonetheless curious if Adrian had ever considered the ridiculous edge of these guys? Was it a challenge for him to present the different sides of their personalities and lives?

Adrian said that was part of the reason why he loved these guys. Admittedly, he's hardcore left of center, no doubt about that, but what he found so endearing about these guys was precisely their characters. He explained that he doesn't make films for their issues. He comes from a background of fiction filmmaking and so his thing is characters. Compelling, entertaining characters. The bottom line for his films is they have to be entertaining. Beneath that he imbues them with ideas. When he met these guys he saw the dichotomy between what other guys wish they had the balls or guts to do and these eccentric aspects to their personalities.

Originally Beyond the Call was supposed to be a fiction film. After he and his brother Roko were nominated for an Academy Award for Genghis Blues, their agent was hounding them to do a fiction film so they could actually earn some money. Actually, Adrian met Ed at a screening for Genghis Blues when their agent was hounding them to do a fiction film, and he learned Ed's story, but didn't think anyone would believe such a story unless he made a documentary first to set the groundwork and prove the premise was real. Returning to the question at hand, Adrian said he tries not to pass any judgment on these guys. He just looks on them as fascinating characters with their quirkiness being part of that.

Asked about the timeline and production process of the film, Adrian reiterated he met Ed in 1999, conducted the first interview, traveled with him in 2000, 2001 and 2002. He couldn't find a penny for the film in 2003 at the advent of the Iraq war either domestically or internationally. PBS came on board at the beginning of 2004 but he didn't get the money until the end of 2004 after seven months of contract negotiations. They cut the film at the end of 2004 and 2005 and premiered it at Tribeca and then the S.F. International in early 2006. "Again," Adrian confessed, "I don't know how you're supposed to do this stuff. I had a credit card, a valid passport, and camera equipment and so I just got on planes and traveled with them and just filmed my ass off. That was the process. My passion is as-they-happen documentaries, not historical, so that every single moment you're rethinking the story. You hear something, you smell something, you see something and you're always thinking, 'How will that fit into the story?' I traveled with them on four trips overseas and I visited them each twice, in Dayton and Pennyslvania. That was over 3-3½ years and the whole time we were just rethinking the whole story. We sat down with 248 hours worth of footage, down to 82 minutes, there was nearly 10 months of editing. But the other thing is, you can see these guys are characters, so the dvd's going to be fabulous because there's so much funny stuff in there, little personal kind of stuff. But that's it. What's the process? Do it! Shoot it. Think about it. Don't get killed. Come home. Do a job or two. That's it."
Posted by Michael Guillen at 12/02/2006 11:58:00 PM