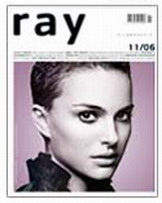 Yesterday afternoon I received in my mailbox my complimentary copy of the November issue of Ray, an Austrian magazine in which two of my reviews—one on Bahman Ghobadi's Niwemang / Half Moon and a solicited piece on Tsai Ming-Liang's Hei Yan Quin / I Don't Want To Sleep Alone, both entries in the New Crowned Hope commemorative—have been published in German. For some reason this just tickles me to no end. To imagine that you can see a movie in Toronto, write about it in San Francisco, and have it be read in German in Vienna. Words do have wings afterall. It equally delights me that Ghobadi included my review on his website.

When I started writing about film a little under a year ago, it was to counteract the depression of being obliged to retire early due to disability. In many ways—because we each identify with our forms of employment—I felt my identity and my life were over. How wonderful it has been to be drawn into this new life and this new identity which seemed to be waiting for me to arrive. Little did I imagine when I keyed in the opening strokes to create The Evening Class that it would result in press credentials and invitations to be a contributing writer to the Canadian film site Twitch, the Los Angeles paper Entertainment Today, Dave Hudson's Greencine, and now this Austrian glossy Ray. Let alone the wonderful community of online film commentarians that have enrichened my sensibility with their unique writing visions and, of course, the interviews: the blessed chance to talk to the artists about this medium that I adore. And the hits keep happening!! I've recently been approached to do television review work and to help launch a new Bay Area magazine as assistant film editor.

Although I've already offered my TIFF interview with Tsai Ming-Liang, I thought I would follow through with this commissioned Ray review. In English! 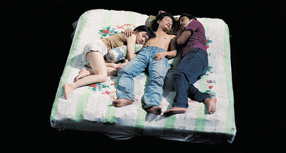 Like a salmon returning to its origins to spawn, Tsai returned to his homeland Malaysia, attracted to the plight of foreign workers who—after the abandonment of government construction projects—were left to fend for themselves. Tsai identified with them, thinking of himself as a wanderer, displaced, without a home; the film's direct link to Mozart, who Tsai envisions as the wandering soul of The Magic Flute.

Possibly Tsai Ming-Liang's most private film, exhibiting little of his customary humor and only a shade of the sexual histrionics that made The Wayward Cloud both entertaining and disturbing, this most recent venture depicts the healing grace of moments of unconditional tenderness.
Posted by Michael Guillen at 12/06/2006 09:22:00 AM

Very cool, congratulations! Did you submit the article in English and they translated it to German, or is German fluency in your bag o' tricks next to the cloning and sleep-deprivation kits? ;)

Hee. I wish I could speak German but all I've picked up are a few perfectly worthless words while leading German tourists through the rain forest; for example, I know how to say "armadillo" in German.

Congratulations on these new opportunities! Is this new Bay Area magazine going to be available online?

That's great, man, you're turning into a star. Wow, maybe I should submit you my short films for review too!

Hardly a star, Swifty, but a happy camper indeed.

Andy, the Bay Area magazine (prospective title, Rattle) will eventually be online, I'm told, but it's not even a sure thing it will survive past the demo copy. I'm just pleased to be involved in trying to get it off the ground.

What is "armadillo" in German, anyway?

You would ask. Heh. I'm not sure if I'm spelling it correctly but it's pronounced "girtletir" (or "belt animal").