As anyone who writes about film online knows, Girish Shambu's eponymous blog is the water cooler for discussing film. His site is the fulcrum of democratized film criticism. One of my first five links to The Evening Class, I continue to frequent Girish's blog on a daily basis out of sheer interest but also to humble myself. Just when I think I know anything about film, all I have to do is read Girish's erudite posts and the ensuing commentary he solicits and inspires to remind myself that the learning curve is constant, and how appropriate that is when it comes to informing oneself about film.

But along with all the informed and inspired writing, Girish characterizes his site by offering up his own unique drawings. I've grown quite fond of them and decided—since lists are all the rage these last few days of 2006—that I'd choose my ten favorite Girish drawings and gallery them here on The Evening Class. This was more difficult than first imagined and anyone who's intrigued should really give themselves an idle hour to peruse his archives to take a look at what is becoming one of his strong self-expressions, along with his gift for camaraderie, his educational skills, his jazz musicianship, his film writing and his art.

I like his non-figurative object drawings the best. With crisp, clean lines Girish captures the simple essence of form. I guess it should be no surprise, then, that I was first drawn to the implements of that capture: a fountain pen, a detail of a fountain pen, and the whittled stub of a pencil. These three images are intriguingly intertextual, implying not only writing but drawing.

His textured instruments come next; first a scaled guitar, then a striped sax. I've never heard Girish's music but these drawings imply a sense of pattern and texture. Which leads me to add that another resonance to Girish's blog is his frequent allusions to music, which serve to complement his meditations on film.

Next, come the lamps. One a kerosene lamp and the other a lava lamp. They reference his ability to illuminate in various ways. 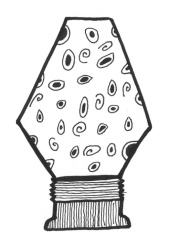 Next, a wine bottle limned by shadow. One imagines two glasses and an animated conversation tucked away in some urban watering hole.

Finally, a rising sun and a palm tree composed of circles. They're comparable in design for me and insinuate each other. The circular energy of the sun is within the tree. Endendros, the Greeks would call it, the life at work in the tree, that which animates and provides life force. I'm reminded of that beautiful portrait Caravaggio has of Dionysos, supine, Asian, autumn-colored grape leaves in his hair, and a glass of wine in his hand. In the wine, concentric rings, generating from his sheer energy. That Dionysian enthusiasm is everywhere present in Girish Shambu's output: in his writing, music, conversation, and drawings. We all feel it. Like vibrations in wine. 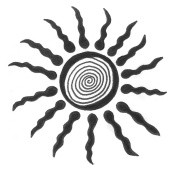 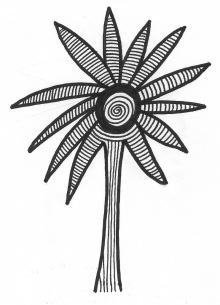 What a great idea for an alterative year-end best list! Girish's drawings are a splendid piece of his blog. I love the screencaps he picks out whenever he decides not to use a drawing, but a part of me always misses his strong lines and inspired compositions.

I feel exactly the same and wanted to do my part to encourage his creativity.

Michael, how touching this is. I don't know how to say Thanks.

I sent this link to my parents and sister in India; it tickles them no end.

I must confess: even though I find drawing a very calming and fun activity, I've done very little of it in the last few months, and for no good reason other than frantic (and poor) time management. But after reading your kind words and Brian's comments, I'm making a new year's resolution to spend some time with my pens each day at the coffeeshop (which is where I usually do my drawing). So, thank you....

Happy New Year to you too, Girish. You have been so encouraging and supportive of my efforts this last year that a reciprocal gesture seemed long overdue. I'm really looking forward to your drawings on your site in the coming year.

He and I saw the latest Ozon film together at TIFF 2005, and as we were waiting for the film to begin, he pulled this drawing out of his notebook:

I found it uncanny, actually, to be looking at one of his hand-drawn images after seeing so many of them shrunk and digitized on his site. I have to admit that I've been tempted ever since to request a couple Girish originals. They'd look so cool in my home theater. ;)

Get in line, buster!! Heh. I'm still waiting for my customized t-shirt.

Darren, I don't think you ever told me that story. I do remember that Ozon screening and how we almost rubbed our eyes in disbelief when Jeanne Moreau walked past us....

Michael, my T-shirt project stalled temporarily because Target stopped carrying my preferred T, and switched to something lighter and (for my purposes) lesser quality. I'm scouring the retail stores for a good replacement, and hope to find one soon. At which time, yours will be the first T-shirt I make!

And guys, I would be honored to send you some, ahem, 'originals'....

I would love that. Collecting art is one of my passions; I have quite a substantial collection and any piece you felt willing to part with would find a welcome home, not only in my house, but eventually in a Bay Area art institution.