You can't beat the price! In January and February San Francisco's Instituto Italiano di Cultura offers up five films for free. The first two—dedicated to Carlo Verdone—are for diehard Italianos since they'll be shown sans English subtitles. All other listings are shown with English subtitles. As the son of the famed film critic and professor Mario Verdone, Carlo Verdone was born with cinema in his veins. Some of the greatest figures in cinema, from Rossellini to Visconti, made regular visits to his home in Rome. As a child he and his brother Luca would show films at home for their friends, and he later graduated from the Centro Sperimentale di Cinematografia. He has received great artistic recognition and numerous David di Donatello, Nastri d'Argento and Foreign Press Awards throughout his career.

On Tuesday, January 9, the Instituto will show Verdone's nineteenth film L'Amore È Eterno Finché Dura (2003), wherein he selects a perennial question, a dilemma that has been analyzed, discussed and romanticized in infinite ways: Why does love disappear? Why do lovers stop desiring each other? Can passion be made to coexist with feelings of stability and security? Can't we stay in love forever? This entertaining yet weighty film is the product of skilled writing. It also offers a view of Rome that is rarely glimpsed in cinema. 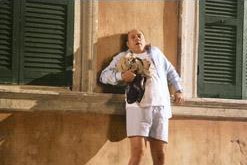 On Tuesday, January 16, the Instituto profiles Verdone's acting skills in Giovanni Veronesi's Manuale D'Amore (2005), which is divided into four different episodes whose characters and situations are woven together as if it were a single story. Each episode covers the four fateful stages of romantic relationships: falling in love, hardship, infidelity, and breaking up, each of which is connected by a story line adeptly brought to life by the actors. The "manual" offers round-trip coverage of the stages of love, with all its ups and downs, with a dose of commedia italiana for a speedy recovery. Verdone has just completed working on a sequel to Manuale D'Amore starring Monica Bellucci to be released in 2007. 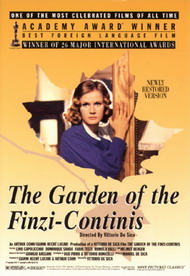 On Tuesday, January 25, in conjunction with the Holocaust Center of Northern California, the Instituto will commemorate the Day of Remembrance with a presentation of Vittorio De Sica's film Il giardino dei Finzi-Contini / The Garden of the Finzi-Continis (1970), which is based on Giorgio Bassani's book by the same name. The screening will be preceded by a presentation by Nora Contini, a member of the local Jewish community and a descendant of the Finzi-Contini family. In an article in the The Jewish Weekly (November 19, 1999), Nora Contini writes, "Contini is an old Italian Jewish name. The book on which the film was based was written by Giorgio Bassani, a contemporary of my father's. The book, however, is a novel, and like most novels it is a mosaic of fact and fiction. The name is ours, but the story is a blend of many families and many fantasies."

The Garden of the Finzi-Continis stirs incisive nostalgia, vividly evoking the tender period before the horrors that followed. It takes place in Ferrara in the years before World War II when a select few friends were allowed in the lush villa and garden of the Jewish Finzi-Contini family. Soon their lives are overwhelmed by the collective tragedy of the war, and the Finzi-Contini family is deported to Germany. In 1971 the film won an Oscar for Best Foreign Language Film, as well as a Golden Bear at the Berlin Film Festival and a David di Donatello for best film. 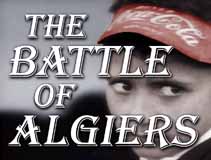 In February, the Instituto honors Gillo Pontecorvo by screening two of his films. On Tuesday, February 6, they present La Grande Strada Azzurra / The Wide Blue Road (1957) based on the novel Squarciò by Pontecorvo's screenwriter Franco Solinas. This film is an atypical comedy about a poacher fisherman brilliantly played by Yves Montand. The following Tuesday, February 13, the Instituto features Pontecorvo's infamous La Battaglia di Algeri / The Battle of Algiers (1966). This semi-documentary film on the Algerian war of independence with non-professional actors is likely one of the most powerful ever made on colonial occupation and its resistance. The film earned Pontecorvo international fame, though it was held back for release in France until 1971. Pontecorvo depicts one of the bloodiest anti-imperialist struggles of the 20th century: the rebellion between 1954 and 1962 against colonial domination in Algeria, one of the oldest and largest French colonies. The focus is on what led to the defeat of the Algerian National Liberation Front (FLN): the Battle of Algiers (1954-1957), which became the defining moment for the collective identity of Algeria against its French colonizers. The film's extraordinary authenticity and dramatic intensity are found in this particular context, joined with revolutionary filmmaking techniques, a very talented cast and an exceptional soundtrack by Ennio Morricone and Pontecorvo along with Algerian music. The Battle of Algiers centers on two main protagonists: Ali La Pointe (Brahim Haggiag), a symbol of the Algerian resistance and member of the FLN, and Colonel Mathieu (Jean Martin), commander of the French paratroopers whose task is to suppress the resistance. The film won the Golden Lion at the Venice Film Festival and three nominations for an Oscar.

I just saw Garden of the Finzi-Continis star Fabio Testi in a Lucio Fulci gangster film from 1989, Contraband. Extremely gory for the mob genre, it is nevertheless an absorbing film with a strong performance from Testi.