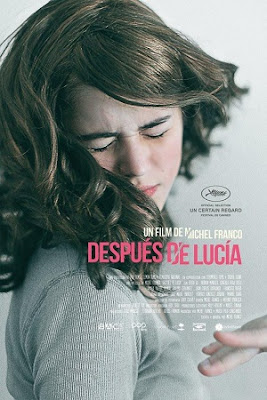 Shortly after its win at Cannes, David Hudson gathered initial reviews, namely National Post remarks by James Quandt; Charles Gant at Variety: "In no particular rush to articulate what exactly his characters are thinking and feeling, or to provide easy mood cues through music (there is none), Franco aims to engage through careful withholding"; and David Rooney at The Hollywood Reporter: "The film is of a piece stylistically with Franco's debut, Daniel & Ana, which premiered in the Directors Fortnight at Cannes in 2009. Austerity and rigorous control are his signature notes, with an unflinching realism marked by extended silences and a distinct preference for conveying information via oblique glimpses rather than in dialogue." He includes comments from Manohla Dargis's Cannes report for The New York Times. Meanwhile, at The Flickering Wall, Jorge Mourinha cautions: "If there is one film you should warn viewers beforehand about, that would be Mexican director Michel Franco's disturbing sophomore effort … a film at moments so unbearable you may well ask whether the director worships at the shrine of Michael Haneke's clinical entomology." Notwithstanding, Mourinha proclaims Después de Lucía "a work of staggering formal and narrative control."

As much as has been written about Después de Lucía with regard to its scathing indictment of peer bullying—and there's certainly enough of that on screen to make you furious—what remains most interesting to me was the very question asked by many of the audience members with whom I watched the film: "Why did Alejandra (Ia) allow herself to be bullied so severely by her classmates? Why didn't she tell her father or anyone in authority? Why didn't she fight back?"

The film's title implies the answer to those queries. Lucia, Alejandra's mother, has died in an automobile accident before the film has even started. Her absence is structural and within it smolders enough survivor's guilt to more than incapacitate any individual, let alone a young teenage girl. I appreciate that Franco has approached the self-inflicted damage of survivor's guilt with such a dry eye; but, even without manipulative music to cue emotion—and similar to his earlier film Daniel & Ana (which I didn't much care for)—Franco ruthlessly exploits the foibles of upper class Mexicans, almost to a fault.
Posted by Michael Guillen at 4/04/2013 06:25:00 PM