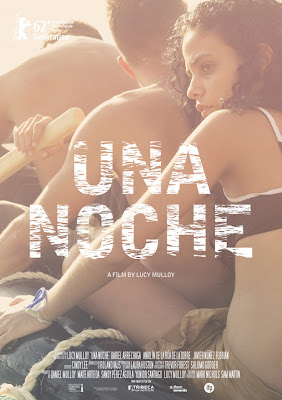 Una Noche premiered at the 2012 Berlin International Film Festival and 2012 Tribeca Film Festival to international critical acclaim. The film shot to international media attention, ahead of its U.S. premiere, when two of the film's lead actors, Javier Nuñez Florian and Anailin de la Rua de la Torre, disappeared on their way to present the film at its Tribeca premiere, reportedly defecting to the U.S. In a highly publicized twist Javier Nuñez Florian and his co-star Dariel Arrechada went on to win the Best Actor Award even as Florian remained in hiding during the ensuing media frenzy.

At Variety, Justin Chang writes: "Marked by a vibrant evocation of Havana street life and excellent performances from three non-pro naturals, Una noche throws off a restless energy well attuned to its tale of impetuous Cuban teens preparing to make the dangerous ocean journey to Florida. Writer-director Lucy Mulloy's sexy, pulsing debut feature has an undercurrent of ribald comedy that doesn't entirely prepare the viewer for the harrowing turn it eventually takes, but it nonetheless amounts to a bracing snapshot of desperate youths putting their immigrant dreams into action."

At Indiewire, Gabe Toro adds: "There's a youthful energy running through Una Noche… [It's] alive and vibrant … at times funny, heartfelt, naughty and nice, a tale of three youngsters who deserve better than the forces that limit them, the corruption that eats away at their powerfully-beating hearts."

At Slant, Ed Gonzalez notes: "Lucy Mulloy is a tourist, but she understands Havana's complex sociopolitical situation better than most. Granted unprecedented and unbelievable access to shoot in the city ... the film realistically reveals the largest city in the Caribbean as a maze of history and discontent, it conveys the struggle of its characters to facilitate their escape from their island prison as a ramshackle puzzle desperately pieced together from a hodgepodge of ill-fitting pieces, some stolen, others acquired through bartering. ...Una Noche shines a light on the balseros phenomenon without miring itself in politics, such as discussions of the 'Wet Foot, Dry Foot' policy."
Posted by Michael Guillen at 4/08/2013 01:14:00 PM