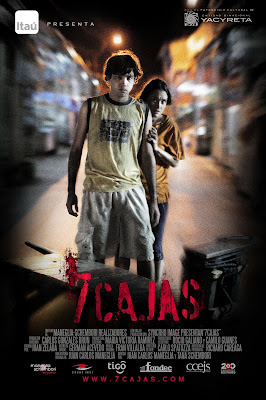 7 Cajas / 7 Boxes (Dirs. Juan Carlos Maneglia & Tana Schémbori, Paraguay, 2012, 105m)—As synopsized by IFF Panamá: "A teenage delivery boy working in a popular Paraguayan market must dodge thieves, rival gangs and the omnipresent police when he undertakes a dangerous contract to transport a load of mysterious—and highly sought-after—crates to the edge of town in this frenetic, inventive thriller."

Winner of the Youth Jury Award at the San Sebastián Film Festival and positioned in IFF Panamá's First Time Directors sidebar, as well as one of the Teatro Nacional gala screenings, 7 Cajas might be low-budget but it's a "breakneck joyride that rivals Hollywood action movies for inventiveness and thrills-per-minute, but also conveys a rich and gritty sense of place, with a range of vivid characters. Meneglia and Schémbori make impressive use of their location, choreographing exciting and elaborate chase scenes using little more than people pushing long, wooden wheelbarrows." (PSIFF 2013) Official site. IMDb. Wikipedia. Facebook [Spanish].

At Variety, Robert Koehler assesses: "Turning the Paraguayan capital's biggest public market into an arena for a wild and cunningly plotted chase movie, filmmaking partners Juan Carlos Maneglia and Tana Schémbori build a rollicking entertainment with 7 Boxes. Certain to be one of the first titles from Paraguay to make a serious dent in the international marketplace, the pic makes a pleasurable surplus from minimal resources and plenty of ironic-comic-violent storytelling energy."

At Indiewire, Boyd van Hoeij describes 7 Boxes as "The Fast and the Furious with wheelbarrows" and adds: "Maneglia, who wrote the intricately structured screenplay, excels in keeping the twists and turns coming while keeping all his narrative balls in the air. And the final payoff is a doozy. City of God-like, agile camerawork by commercials cinematographer Richard Careaga is smudgy yet breathtaking, and combined with a pumping score that mixes electronic music and local, traditional instruments it delivers, well, the goods."

At Twitch, Kurt Halfyard deems 7 Boxes "genre-film bliss" and claims there are as many surprises in this film "as there are retail opportunities in the market." He concludes, "The storytelling confidence, the unaffectated acting, and, above all, a heightened grasp of plotting and logistics on display in 7 Boxes is astonishing."
Posted by Michael Guillen at 4/08/2013 12:39:00 PM