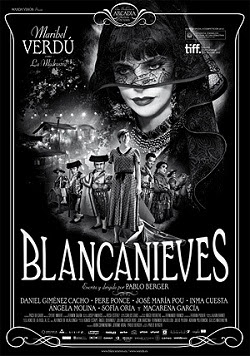 My air itinerary from San Francisco to Panama City is such that I will be arriving too late for the International Film Festival Panamá (IFF Panamá) opening night gala screening of Pablo Berger's Blancanieves (2012) at the Teatro Nacional in the historic Casco Viejo, which would have upset me had I not caught Berger's innovative take on the Grimm Brothers fairy tale "Snow White" earlier this year at the Palm Springs International Film Festival (PSIFF), where it likewise served as the opening night gala and won that festival's inaugural Cine Latino Award. Since January, however, Blancanieves has added yet more jewels to its festival crown, namely a whole slew of Goyas, including best picture, best actress (Maribel Verdú), best new actress (Macarena García), best original script (Pablo Berger) and best cinematography (Kiko de la Rica). Along with launching the second edition of IFF Panamá, Blancanieves will be one of twelve films competing in the Iberoamerican Panorama section. My main regret about not attending the gala screening at IFF Panamá will be missing out on seeing Maribel Verdú, who has confirmed she will be accompanying the film to Panama.

Blancanieves is a creative reminder that there are, perhaps, only so many stories to be told and that a storyteller is characterized by how he or she tells the story. Berger has remained faithful to the Grimm tale even while bravely introducing new narrative elements, namely an entire bullfighting subtext that specifically inflects his native Spain. Berger told The Hollywood Reporter: "A famous Spanish photographer, Cristina García Rodero, traveled all over Spain taking pictures of fiestas. ...When her book came out, it fell into my hands. And in this book is a series of photos of bullfighting dwarves. There was so much dignity in the photos. And one of the stories that came to me was Snow White."

He imagined a film that would surprise his audiences with a "high concept"; i.e., a silent, black-and-white film. Blancanieves was already in the can when Michel Hazavanicius released The Artist. Respectful and gracious, even if at first disappointed, Berger understood early on that the two films were distinct from each other—The Artist more an homage to American silent cinema whereas Blancanieves honored the European tradition of silent cinema—and that the cinematic landscape could support both, hopefully encouraging similar projects for the future now that mainstream audiences are becoming familiar with the essential beauty of silent cinema.

Introducing his film to his PSIFF audience, Berger stated: "I have been waiting for eight years for this moment. The last time I was here was in 2004 with my first film Torremolinos 73. After Torremolinos, I wrote a script called Blancanieves and the first page of this script said, 'This is a black-and-white silent film.' In 2005, this was considered crazy. Now let's talk about who's crazy. Remember The Artist?" Berger then went on to claim: "For me, cinema is to dream awake and to live the life of others. Not to think and just to feel. So for me it would be great if tonight—even if it has taken me eight years to make this film—you can forget your life and live the life of my characters and have a nice dream ... and a few nightmares."

"If The Artist is a love letter to the heyday of Hollywood silent cinema," Diana Sanchez posed in her program capsule for the film's premiere at the 2012 Toronto International Film Festival (TIFF), "then Pablo Berger's Blancanieves ... is an homage to the sumptuous European silent melodrama. Relocating the Grimm fairy tale to a romantic vision of 1920s Spain and working in atmospheric black and white, Berger takes full advantage of the silent film's expressive potential to depict the golden age of toreros with gory, Goyaesque violence." 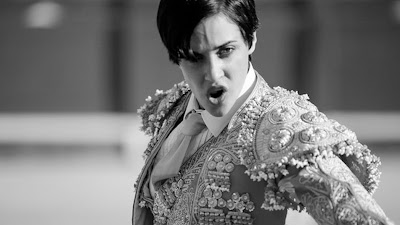 At Toronto Screenshots, James McNally confirmed: "The variety of musical styles along with the use of different rhythms of film editing make Blancanieves a more formally daring film than The Artist. Berger's influences are the masters of silent filmmaking from its latter, more developed stage: Gance, Murnau." As value added, McNally generously uploaded his recording of Berger's Q&A with his TIFF audience. Likewise dispatching from Toronto to The Hollywood Reporter, David Rooney synopsized: "Spanish writer-director Pablo Berger's reinvention of the Brothers Grimm classic is the most original of the year's Snow White makeovers."

I concur with both McNally and Rooney. What energizes Blancanieves is not only its breathtaking visuals but Fernando Franco's staccato castanet editing and the thrilling music and dance sequences scored by Alfonso de Vilallonga. The film upsets expectations with audiences well familiar with the tale, especially in anticipation of a prince to wake Blancanieves from her cursed sleep, and is far more imaginative and challenging than Tarsem Singh's tiresome Mirror Mirror and Rupert Sanders formulaic costume drama Snow White and the Huntsman. But let's not kid ourselves about Hollywood's hegemony during Awards Season, even when it comes to divvying out technical awards for editing, sound, and costuming. The only chance Blancanieves had of entering that fortress was as Spain's official submission to the Foreign Language category, and, unfortunately, it did not make the short list. At Frocktalk, costuming enthusiast Kristin M. Burke singles out Paco Delgado's designs, which have been overlooked by AMPAS in favor of Delgado's work on the higher-profile Les Misérables. It's unfortunate that he couldn't have been nominated for a combination of both films. 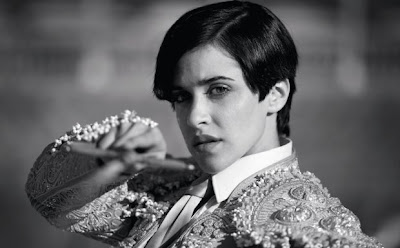 Perhaps it's no surprise that accolades for Blancanieves have arrived closer to its native Spain. As noted by Dave Hudson at Fandor, Blancanieves scored San Sebastián's Special Jury Prize, with Macarena García sharing the Silver Shell for Best Actress for her performance as Carmen. Then again, as mentioned earlier, Blancanieves swept the Goyas. Aggregating further reviews for Fandor, Hudson quoted Gonzalo de Pedro Amatria's TIFF dispatch to Cinema Scope: "Berger takes the Snow White tale and rewrites it, mixing low culture with visual references out of high culture (of cinema, specifically). There are references to Jean Vigo, Abel Gance, and Carl Theodor Dreyer, among others, but the film is not just a postmodern compendium of quotes: it's a search into the past to find the forces that led to the cinema of the present. Minus the political overtones of another great homage to old cinema—Miguel Gomes's Tabu [also screening in IFF Panamá's Iberoamerican Panorama]—Berger's film is more a tale about envy, love and death, mixing comedy with a great sense of visual spectacle, than it is a reflection about history and cinema."

Hudson likewise mentions Toronto reviews from Roger Ebert ("It is a full-bodied, visually stunning silent film of the sort that might have been made by the greatest directors of the 1920s, if such details as the kinky sadomasochism of the Evil Stepmother could have been slipped past the censors") and Twitch's Jason Gorber ("Kiko de la Rica's photography is often stunning"). Though grading it a B+ at Indiewire, Boyd van Hoeij qualified: "Though perhaps a tad long, this gorgeously shot black-and-white extravaganza has the cojones to think outside the box and comes out on top." 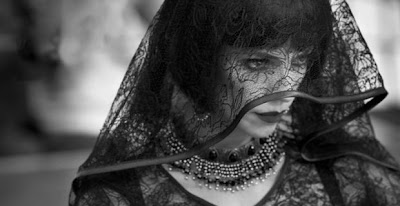 Since its theatrical release in the States, more reviews have been coming in, most notably from Indiewire where Gabe Toro (no pun intended) writes: "Even if PETA activists won't be amused, there's a grace and grandeur to the bullfighting scenes that, portrayed with black and white editing and photography, make the sport seem larger than life: they're shot in an immersive manner that puts to shame the 3D theatrics of most in-your-face blockbusters. And director Pablo Berger's film also manages to find a neat twist on the classic formula, integrating the poisoned apple in a story stripped of supernatural artifice, but still feeling vaguely fantastical. Oddly enough, Blancanieves ends on a beautifully romantic, tragic note, maintaining the story's ages-old hold on younger audiences, while also presenting a ghoulish conclusion that feels authentic and well-earned. The silent trappings seem like a gimmick when employed in 2013, but the story's impact is never dulled." Indiewire likewise offers a video interview with Berger on the making of the film, as well as Eric Kohn's commentary.
Posted by Michael Guillen at 3/31/2013 08:44:00 PM